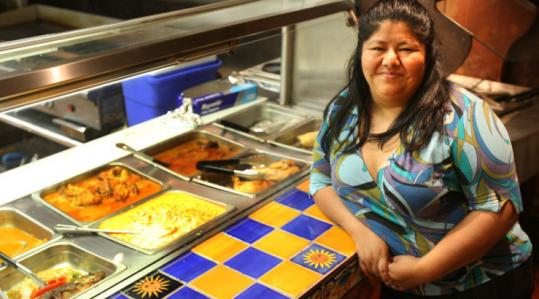 Maria Landaverde, at the Maya Sol Restaurant, has found that food from her native Guatamala is a better choice for her. (Globe Staff Photo / Justine Hunt)
By Danielle Dreilinger Globe Correspondent / March 15, 2009
Text size – +

SOMERVILLE - Maria Landaverde, 41, a Somerville youth programs coordinator who lives in Framingham, wanted to believe she was already ahead on her diet. After being diagnosed with diabetes, Landaverde visited a nutritionist who told her to eat less bread.

"I don't eat bread!" said Landaverde, who emigrated from Guatemala 22 years ago. But, well, "I do eat tortillas."

Her quandary is hardly isolated. Somerville advocates for immigrant rights and researchers say that when people immigrate to the United States, they change their diet and activity habits for the worse. A new study aims to help them stay healthy.

The $2.3 million grant teams Tufts University with several nonprofits in Somerville: the Welcome Project, the Immigrant Service Providers Group/Health, the Haitian Coalition, the Brazilian Women's Group, and the Community Action Agency of Somerville.

Researchers think it's the first study of its kind.

Often stressed and short on time, immigrants "begin to eat an American diet that consists of the worst food we have to offer" - fast food and sugary drinks, said Tufts principal investigator Chris Economos.

She saw the problem when she researched Shape Up Somerville, the city's acclaimed nutrition and exercise initiative.

Lisa Brukilacchio, director of the Somerville Community Health Agenda at Cambridge Health Alliance, said that was consistent with national findings. In the clinics, "We see higher levels of diabetes in our Latino and Haitian Creole patients."

Concern runs especially high in Somerville, Brukilacchio said, due to its high immigrant population. 2000 Census data showed 29 percent of Somerville residents were foreign-born. "That's a fairly significant chunk of our population that may be at risk," she said.

Landaverde, who works for the Welcome Project, agreed with the thesis. "This is what happened to me too, because when I was in my country I was not overweight," she said, sitting with her son Jorge Castillo, 21, at Maya Sol, a Mexican restaurant in East Somerville. (Both ordered only drinks.) She'd rather eat this food or - better yet - home cooking, she said, but can't always fit it in.

Indeed, the study will create a map of places to get healthy food and be active in Somerville, Economos said.

Though it embarrasses her, Landaverde said, "When [Castillo] was little I used to give him all this junk food thinking it would be a good meal," she said. "My first choice was ."

That misperception was due in part to the fact that in Guatemala, McDonald's is expensive and classy, Castillo said. "People come in with limos."

In addition, Landaverde thought serving sizes were bigger in the United States. She can get three meals from a single Maya Sol dinner, she said.

Castillo thought US food was overprocessed. In Guatemala, meat goes straight from the cow to the stove, he said, but "here in America, a lot of the food's gone through hormones and lots of different treatments." He added, "I feel full but not satisfied."

As their diets change, immigrants' activity levels tend to drop. Again, US conventional wisdom often doesn't work, Brukilacchio said: "You can't just say 'You should join the gym.' " For one, she said, many immigrants don't think about "exercise" per se.

Landaverde had never exercised, but she did walk a lot, because "having a car in Guatemala is a luxury," she said. (Also, it never got cold.) Her mom used to tell her, "You want to do exercises? Clean the house!"

Economos plans to field-test other strategies. Researchers will follow 400 mothers who have been in the United States for less than five years and their elementary-school-age children.

"We have to find out how to communicate," Landaverde said. Conveying information about diabetes "is very difficult because we're not used to [having] that sickness." Her mother, who lives with the family, hasn't changed her cooking.

Brukilacchio said, "It's going to take a lot of work from a lot of different vectors and forces to make sure we can really move a whole community toward health."

Landaverde regretted that she didn't qualify for the study. "I hope that they will get an answer and get a program that is tailored to our needs and our culture," she said. "I don't want my kids to have diabetes."