A slow road to reconstruction 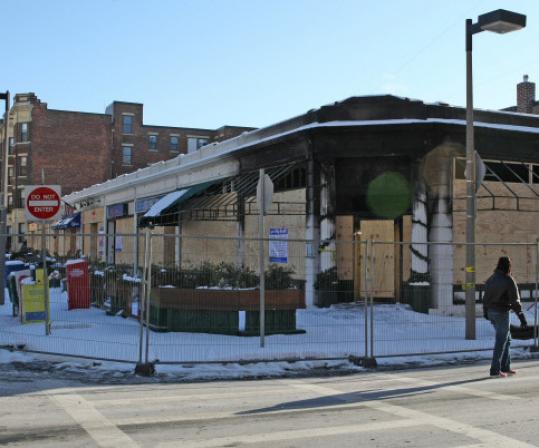 Building owner Monty Gold said last week that he must wait for his insurance provider, Nova Casualty Co., to respond to his claim before he can move forward, but said he hopes to restore the building exactly as it was before the fire, and would only sell the building if a buyer "way overpaid."

At the meeting, restaurant owners and their families vowed to do what they could to bring their restaurants back.

"It's our intention to go right back there and do the exact same thing that we did before," El Pelon owner Jim Hoben said at the meeting. "The minute we get a key, we're going to get in there, and get our food in there, and start cooking again."

Rod Dee owner Osmin Hernandez agreed, saying he and his staff are making "every possible effort" to return to business. "We'd be very happy to see you all there sometime," he said, prompting applause.

On Feb. 6, the city's Office of Emergency Preparedness applied on behalf of the eight businesses, including Gold, for a federal emergency loan, said Lucy Warsh, a spokeswoman for the city's Department of Neighborhood Development. Such loans, she said, are designed to help cover start-up costs if a disaster causes five or more business to suffer uninsured losses of more than 40 percent. The Massachusetts Emergency Management Agency has to review the application before it can be sent to the Small Business Administration, which, if it approves the application, would work with the businesses directly to negotiate low-interest loans. Warsh said her department hopes to hear from the SBA by early April.

But even if all the stars align, the restaurants won't reopen anytime soon, according to John Lynch at Boston's Office of Business Development, who has been working with the restaurants since the fire. He said during the meeting that it was unlikely the restaurants would be in business by the start of the 2010 Red Sox season.

"It's so hard to tell" how long the process will take, Hoben said before the session. "Everybody tells you great things in the beginning. The information comes so slow, one little tidbit every week."