THIS STORY HAS BEEN FORMATTED FOR EASY PRINTING
DOWNTOWN

Learning to nail the job interview 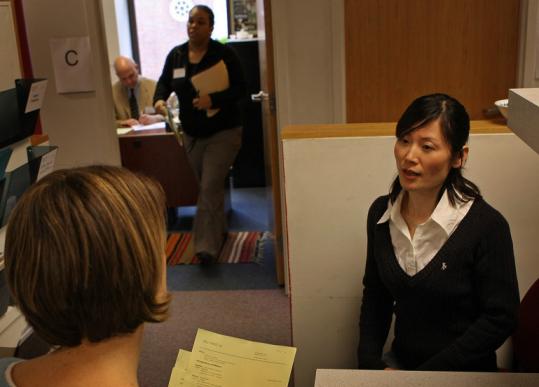 Saungam Touch came to the United States from Cambodia 25 years ago. For 18 years she worked at , a leading maker of equipment for testing microchips. She was laid off in 2008 and faced the frightening prospect of needing to find work in an economic downturn without having mastered the English language.

Now she is a student at the International Institute of Boston, where she and more than 100 others participated in a mock interview day on Feb. 26. It was part of a program to help immigrants and refugees improve their English skills and receive employment training.

"We are here trying to better ourselves so we can get jobs and give back," Touch said in her halting English. "People should like that we are here."

The 85-year-old nonprofit institute, based downtown, helps immigrants and refugees settle into their new lives. Along with employment training and placement, and English and literacy classes, the institute provides refugee resettlement services and legal aid.

The students represent a range of ages, educational backgrounds, and skill levels - from Iraqi refugees who worked as physicians to those who are not literate in their own languages.

It is done in a way that challenges the students' safety zone without taking them out of it entirely, said Jude Travers, workforce development director of the institute.

Each student is interviewed twice by volunteers, who participate in the event either through their company or a volunteer organization such as United Way. The questions asked and the length of the interview depend on the level of the student.

Even though it was a simulation, many students still found it nerve-racking to practice their interview and language skills with a stranger.

"I was very nervous; questions make me nervous," said Maria Barbosa, a Cape Verdean who has lived in the United States for 33 years. "But as it went on I forgot about the butterflies inside."

Many of the volunteers come from companies in the area, including Genzyme, Coldwell Banker, and MFS Investment Management. Some of them have also been laid off recently.

"It's a real eye-opener for participants," Travers said.

It gives volunteers a better understanding of the barriers immigrants and refugees face on a daily basis, and how that might explain why they barely speak English despite living in the United States for several years.

A lot of the students landed jobs with others from their home country with whom they could continue speaking in their native language, said instructor Shereen Russell-Ahmed. "Speaking English is not their first priority - finding a job is," she said.

There are other obstacles. Many new arrivals find it difficult to keep up with the adult ESOL classes, and requirements to stay in a program often work against the daily lives of working adults, Travers said.

That's assuming they can find a program that has space. At the International Institute of Boston the waiting list is often a year long for one of the evening adult education classes.

In January and February, there was a 12 percent increase in students signing up for ESOL classes over last year. The day program saw a 9 percent increase. Travers attributes the rise in enrollment to the economy.

"We are seeing people who have been laid off - even clients we had just recently placed, clients who had not been easy to find jobs for in the first place," Travers said.

Volunteer interviewers are also exposed to cultural differences that could lead to misunderstandings. For example, Muslim women may be uncomfortable shaking hands because it violates principles of their religion, Travers said.

Ann Krantz, senior staff consultant at MFS Investment Management, observed that a couple of the students she interviewed became very personal and commented on her appearance.

Students get feedback on how they presented and learn that they do not have to answer certain questions from potential employers, such as their age or religion, and whether they have children.

Travers and her colleagues, too, are given feedback about ways they can improve their interviewing preparation or offer direction in matching particular students with jobs. One volunteer left the event with the resume of a student to share with recruiters, and others spoke about mentoring and hiring as positions open up at their companies.

Jesse Nankin can be reached at scuppers1314@gmail.com.