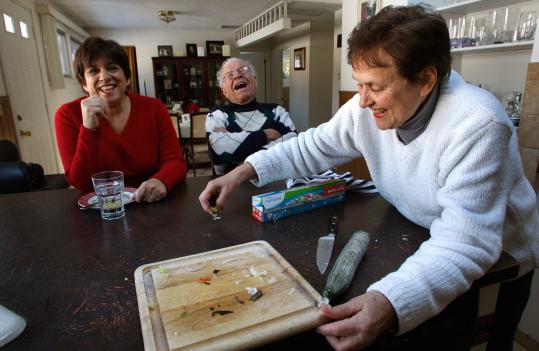 Melanie Dukas sleeps in a small square bedroom in a corner of her parent's ranch house, Saugus traffic whooshing by her curtained windows.

The floor is often a cyclone of clothes. Her parents can't believe she stays up until 2 a.m. She rolls her eyes at their rules.

A marketing/communications specialist, Dukas found herself out of work with a storehouse of debt five years ago, after the dotcom collapse.

Reluctantly, after many months of struggling, she backtracked to mom and dad's doorstep two years ago - a journey she once thought was one-way. Now, she stays in her old bedroom, where she grew up in her days as a flower child teenager.

"I can't believe I'm still here," said Dukas, nestled into a couch in her parent's living room. Nearby, through a set of sliding glass doors, a TV droned and her near-octogenarian mother and father napped in the afternoon sun. "It's hard not having a place of my own."

For many of us, the idea of regressing to the nest isn't at all appealing - more like horrifying. But for some adult professionals in this hurlyburly economy, it can be the only shock absorber against job losses, upside-down loans, or dunes of debt.

"I had no other choice," noted Dukas, who is unmarried. "In the beginning, I really felt stuck here."

Because the cyclone of the recession is still touching down, there are no specific numbers on how many adult children rebound back to mom and dad. However, recent US Census data reveal that about 3.4 million parents share a home with adult children, a jump from 2.1 million in 2000. (This includes both adult children returning home and parents moving in.)

A good chunk of this is due to the ever-present "boomerang" phenomenon, when recent college grads orbit back home due to inertia, hypothesized Stephanie Coontz, director of research for the Council on Contemporary Families.

As the years go on - and adult children grow older and establish themselves - such a shift grows ever more awkward, she said.

Still, there are definitive ways to cope. Before anyone calls for the U-Haul, hold a family meeting, suggested Jean Elson of the University of New Hampshire sociology department. Around a table, both sides can determine ground rules and outline tactics if problems arise. Then, later, there should be regular status updates and possible timelines for moving out, she said.

Above all, both sides should be flexible. Parents should also recognize that their kids are adults - don't try to dictate their lives or offer too much advice, Elson advised.

Simply for sanity's sake, adult children should carve out their own physical space; they should also be aware that, once within mom and dad's walls again, it can be easy to regress to former relationship patterns.

But perhaps the most difficult aspect of coming home to roost is facing the stigma. "It can be seen as a failure," said Elson.

It isn't as much of a disgrace in other cultures, she added, where extended families are more the norm. "There's this American ideal of independence as being a part of adulthood."

However, boomeranging back to the nest does have its benefits - largely, it serves to renew and rebuild relationships, explained Coontz.

Although things were turbulent at first, that has been the case with Dukas and her folks.

Mom Ismene ("Izzy") Dukas described her daughter in her younger days as "always finding a way to go off."

"She never really visited us," said the 78-year-old retired waitress and dancer. "She had her life, different than ours."

But now: They chit-chat; eat together; enjoy each other's company.

"I'm just going to appreciate this time with them," said Dukas, describing her mother as a "doll" and explaining that the clouds have cleared over her once "stormy" relationship with her father.

Still, she won't spread on the fructose. It was "awful at first." Humiliating, even.

She returned home after the emotional and financial blow of what she thought would be a temporary layoff - at first taking all pains to avoid it. That included borrowing money and "dumbing down" her resume to get work. She ended up cycling through too many jobs that were "way beneath me," she said.

Eventually, she just didn't have the energy to continue sitting in the interviewee seat. So she settled for something totally different - taxi driving.

But even with shuttling people six days a week and freelancing website design, she still couldn't pull it together.

So she left her quiet cottage on the beach in Beverly Farms for her parents' ranch in Saugus. She had to start wearing ear plugs to stifle the traffic noise; tune out blaring TVs; and learn to keep her patience despite her parents' idiosyncrasies, such as parking "just right" in the driveway.

Then there was the cardinal rule, not to be broken: Everyone out of mom's kitchen. She's the only cook in this house.

Dukas, although she loves and misses her stove and her cast-iron skillet, will admit that "the meal plan is great. There's always a hot meal for me."

But all told, "It was hard to adjust to doing things their way."

Not that mom and dad had an easy go of it, either.

Although she would do anything to provide for her daughter, Izzy never expected to have kids under her roof again - especially so far into retirement. "I thought once they left," she said, "that was it."

"We'd gotten used to just the two of us," agreed dad Kemon (pronounced like "lemon") Dukas, 79, relaxing with his feet up on a recliner.

Now, he quipped, he has two women ordering him around. "They team up on me. It's like stereo - one here, one there."

Izzy agreed that there's sometimes a clash of personalities. "She has her way, I have mine," she said. With a laugh, "She has a lot of advice for us."

But soon enough, the elderly couple will have their retirement to themselves again - and Dukas will regain her freedom. The 54-year-old has started her own Internet marketing firm, and is hoping to relaunch from the nest early next year.

"For a while it seemed like I was never going to leave," she said, smiling. "There's an end in sight."