THIS STORY HAS BEEN FORMATTED FOR EASY PRINTING
CHARLESTOWN 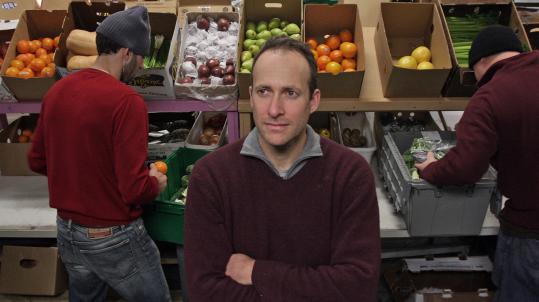 Boston Organics founder Jeff Barry at his warehouse in Charlestown, where orders are filled. A box of seasonal root vegetables costs $29 and is sourced as close to Boston as possible. (George Rizer/ Globe Staff)
By Jennifer Schwartz Globe Correspondent / February 15, 2009
Text size – +

Jeff Barry, the founder of Charlestown-based produce delivery service Boston Organics, found that some of his customers were dismissing bananas, even those of the organic, fair trade variety.

Eschewing exotic fruits shipped from far away, some of his customers were developing a preference for locally grown food, and Barry, who sells a variety of produce boxes directly to consumers, decided to jump on the bandwagon.

In late December, he launched the "dogma box" a crate containing seasonal produce sourced as close to Boston as possible as a salute to the importance of supporting small local farmers and sustainable agriculture.

"There is a lack of local supply because there isn't enough demand," said Barry, 40, a Peace Corps veteran with a master's degree in environmental economics, explaining that New England's winter isn't entirely to blame for the fact that less than 5 percent of the food Massachusetts residents eat is grown in-state.

For now, "seasonal" implies an abundance of root vegetables and apples.

Last week, 50 boxes were delivered to homes and offices in the Boston area, down from a high of 75 in early January. Barry said he suspects the limited winter selection is getting monotonous.

"If we make a commitment to farmers that we'll buy what they grow, they'll have the confidence to invest in technology like root storage and hot houses, and we can have year-round variety," he said.

"The interest level and awareness has been explosive in the last few years," said Michael Rozyne, the founder of Milton-based Red Tomato, a nonprofit that connects Northeastern produce growers with buyers.

The growing season in New England runs roughly from June to November.

"We should be looking at this question regionally and not get too parochial," said Rozyne. "It depends on your palate. If you open it up to all dairy and meats and grains, local food could comprise 25 to 50 percent of a New England diet. If you're wildly flexible, it can be more than that."

Growers, distributors, and consumers agreed that a poor image of the globalized food market in conjunction with decreased accountability has sparked nostalgia for the days when people were connected to their sources of food.

"Every time there is a food safety scare, people recognize that our global delivery system isn't as safe as we'd like to believe," said Rozyne.

James Lionette, the owner of Lionette's Market in the South End, blames the rise of the supermarket for turning food from sustenance into commodity.

"We should trust our community members to grow good food, instead of trusting claims on a package," Lionette said.

"It's sad that we're more familiar with exotic food," he said. "More people in New England can identify the difference between an orange and a grapefruit than a turnip and a rutabaga."

But customers are seeing plenty of regional roots this winter, and coming up with creative ways to prepare them.

Kyle Robidoux, 33, from Roxbury, said he's been eating a lot of mashed turnips and boiled carrots.

"Our daughter is 16 months old, so we meal plan," he said. "We spend on average 50 bucks a week. Friends are astounded that we can get what we need, but you'd be surprised how far rice and beans and a dogma box can go."

The crate costs $29 and is priced comparably to organic produce found in markets.

"I do sometimes find it challenging to spend the extra money," said Ralph Menapace, a Boston Organics dogma box customer who has been using his glut of potatoes to make gnocchi.

"I hope that restoring local farming will ultimately bring down the prices. I would still be willing to pay a premium, but, with luck, far less than we pay now."

Jennifer Schwartz can be reached at jensch72@gmail.com.