New YMCA dazzles and delights with bells, whistles, and ballet 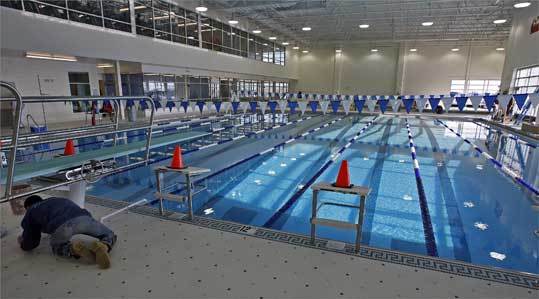 Some call it the Ritz. Others seem in awe of the largest and most expensive YMCA ever built north of Boston.

"This feels like a private club," said Katherine Bell, who sat in the WiFi cafe of the new Marblehead-Swampscott YMCA typing on her laptop while occasionally glancing through a nearby window at the two indoor pools.

Set on 19.5 acres at Leggs Hill in Marblehead, the $24 million, 90,000-square-foot facility opened less than two months ago. Since then, membership has more than tripled from the old YMCA, with 9,600 people - mostly from Marblehead and Swampscott - signed up.

The YMCA has been in Marblehead for 150 years, and since 1910 owned a 15,000-square-foot building downtown that had a small pool, gym, and outdated locker rooms. For decades, Y officials searched for property for a new building site, but it wasn't until 2000 when they found 4 acres on Leggs Hill - an old construction site that includes land in Salem and Marblehead. In 2004, another 15.5 acres on the hill were purchased, and YMCA officials decided to double the size of the building and project.

"We think it was the largest capital campaign for a single YMCA in New England," said Paul Gorman, executive director of the Marblehead-Swampscott YMCA.

To raise money, Gorman and other Y officials enlisted the help of several prominent families in the community, including Carolyn and Peter Lynch - former manager of Fidelity's flagship Magellan mutual fund - and Rose-Marie and Eyk Van Otterloo. After each family donated $2 million, the center was renamed the Lynch/Van Otterloo YMCA.

The Lynches said they wanted to give back to the town where they have resided for 38 years. "The Y was important to me when I grew up," said Peter, who believes the facility's children's programs help build self-esteem. "It provides a place for young people to go that is safe and organized," added Carolyn.

Gorman and others set a fund-raising goal of $14.5 million. Another $1.7 million came from Marblehead's Belinda and Henri Termeer, who allocated the money so the Boston Ballet could build dance studios and offer classes to the community. Even though the studios don't open until Monday, already 175 students have signed up for classes.

Besides the 1,000 donors who gave $14.5 million, the rest of the project will be paid by bank loans, the sale of house lots on the Y property, and $1.35 million from the sale of the old Marblehead Y property.

It took two years to complete the building, and much of the fund-raising was completed before the current downturn in the economy.

Gorman said the transformation from the former YMCA - which could fit inside the new building's gym - has been smooth, given the overnight change in members, employees, and budget. More than 1,500 people now use the Y each day. There are 262 parking spaces. Its budget has more than doubled and will be about $6 million this year, with 220 employees.

Rates are the same as in Beverly, Gloucester, Ipswich, and Salem, four of the six communities that host facilities in the YMCA of the North Shore network. Families with children pay a one-time joiner fee of $99 and an $86 a month membership fee. Single adults can join for $77 and pay $47 a month, while youths up to age 13 pay $11 a month with no joiner fee.

Gorman acknowledged the new Y will cut into membership at other health clubs, and would have a noticeable impact at the Jewish Community Center of the North Shore in Marblehead.

At the nearby JCC, executive director Perry Frankston said his center had been preparing for the opening of the new Y. "We're looking at, for 2009, a 15 percent decrease in membership," said Frankston, who added that 6,000 people now belong the JCC. "We've accounted for it and we budgeted for it," said Frankston, who believes there is room for both facilities.

Inside the Y, some new members stared at the 30-foot-high lobby ceiling and marveled at the numerous large exercise rooms. Bell, who lives in Swampscott, said she would not miss the old building, which had about 10 parking spaces, was cramped, and was not handicapped-accessible. "At the old Y, the kids were crawling through rusty puddles in the basement locker rooms," she said.

Upstairs in the expansive fitness room, Bernie Kummins had just finished working out and was still marveling at the building. "This place is fantastic; it's a credit to the community," said Kummins, who lives adjacent to the new Y and originally feared that the 1,200 additional cars would create traffic problems in his neighborhood. "So far so good," said Kummins. "The people who come up and down the hill appear to be very respectful of the residents thus far."

In a nearby hallway, Kim Schillinger looked through a large window into the gymnastics room where her son was taking a tumbling course. "We joined in December," said Schillinger, who had never belonged to a Y and was looking for a place where her three children could take classes in the cold months. "I think the community really needed something like this to really bring everybody together."