Lifting the poor with sustainable design 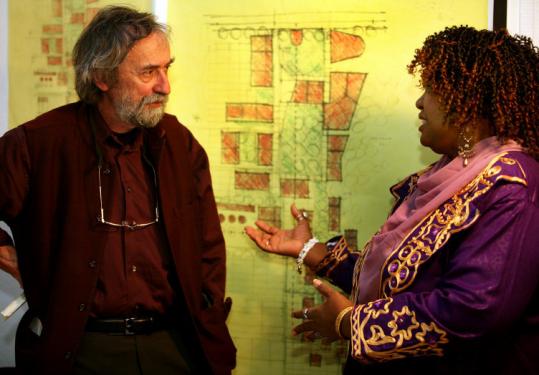 When architect Jan Wampler arrives in Haiti next month to share with the people of Arcahaie his model for a sustainable village, he will break a self-imposed rule that has guided his international work for more than 35 years: meet with people in their space before drawing a single line.

That decision demonstrates how much trust the acclaimed MIT professor has in Gerthy Lahens, a local Haitian activist who serves as catalyst, liaison, and organizer for the village project. The two got together recently in Wampler's campus office to look at plans for the village, update the four undergraduates with whom they are working and traveling, and discuss the latest trials in a country bedeviled by poverty, deforestation, natural disasters, political unrest, and limited resources. It is a country whose irrepressible spirit Wampler, a Jamaica Plain resident, sees embodied by Lahens, who lives in Roxbury.

"Everywhere I go - every continent, every country - it's the women of the world who are organizing to change it for the better, not the men," said Wampler. "Gerthy proves the point. My students and I need her to make this happen. I'm confident that she is the sort of resource and inspiration who will allow us to take this unusual first step of designing before visiting."

Lahens, 56, a former MIT research fellow and mother of an alumna, has a six-year history of partnering with professors and students at the institute for the betterment of her homeland. Past projects include purifying water, building a school, aiding fishing villages, and providing computer training. The scope of this project, though, would seem quixotic without Wampler's record of accomplishment: homes in earthquake-ravaged Turkey; schools in China and Sierra Leone; an orphanage in Ecuador; and community centers in Mexico and Thailand.

In Wampler's office, beneath the perimeter of shelves containing models of completed projects that document the 38 years he has taught an international workshop at MIT, lies the organized chaos of works in progress: blueprints, photographs, calendars, and poster-boards. Nine chairs are jammed into a tight space - evidence of Wampler's belief in the collaborative dimension of architecture.

He and Lahens stand by a sketch of the village complex that is taped to the wall and review its interlocking plazas, which are anchored by a school and punctuated by vegetable and floral gardens, and boast centers for the arts, health, and community, as well as dorms and a cafeteria. Wampler points out a water tower and tells how it will be used to irrigate the gardens that provide the food served in the cafeteria. "Sustainable" is mentioned repeatedly. Wampler intends to team with local workers and get creative in the face of limited resources. He talks of rammed-earth blocks, thatch roofs, planting bamboo, and photovoltaics.

The discussion then turns to a computer center, which he and Lahens see as the new marketplace.

"With the Internet, people can make and sell goods where they are," said Wampler. "They're no longer dependent on cities for income. Our intention is to help people where they are."

Funding a project of this scale in this volatile global economy doesn't seem to faze Wampler. He recently witnessed Ecuadorians selling handmade goods to meet expenses for a community center. That piecemeal approach, said Wampler, inspired a donor to bankroll the project after seeing a model of it.

"There's a power of architecture to make funding possible," said Wampler. "I'm confident we'll find a donor and begin building in Haiti in the spring."

Wampler emphasized that no model will be built until he and his students receive feedback from the Haitians, whom they plan to visit in February. Lahens said she could not imagine a single change, then mentioned, with a laugh, the addition of a little Haitian style.

"Jan wants to provide the underserved with the level of quality that only the rich can usually afford," said Lahens. "It touches my heart."

"The poor have only one house," said Wampler. "They should have the best architecture, not makeshift architecture."

Asked about his egalitarian approach to a field often maligned for its ego and excess, Wampler recalled a decision he made as a student in the 1960s at the Rhode Island School of Design.

"It was time for a thesis project," he said. "Designing an embassy or museum was the usual thing, but that didn't appeal to me."

Wampler had read about some struggling boat-builders in Nova Scotia being housed in government trailers. It struck him as wrong.

"With very little money, a bunch of egg-salad sandwiches, and a terrible car, I drove to this Nova Scotia village to see if I could design housing in a way that these people had designed wooden boats," said Wampler. "I wanted to see if I could help them transfer that technology. I wanted to help."

It's an inclination shared by his students.

"I see this as the same sort of grass-roots phenomenon that got [President Barack] Obama elected," said Amanda Levesque, 20, an MIT junior from Tewksbury and a member of Wampler's Haiti project. "We're going to see a lot more global awareness in our field and others. I think we're sick of seeing Prada stores instead of schools."

Wampler's prizing of people, not profits, has earned him a reputation as "the Walt Whitman of architects." Asked if he had a "Song of Myself" to give the world, he said, "It's a song of others."

Ron Fletcher can be reached at rfletcher@bchigh.edu.