Officials struggle to stem distress for families and communities 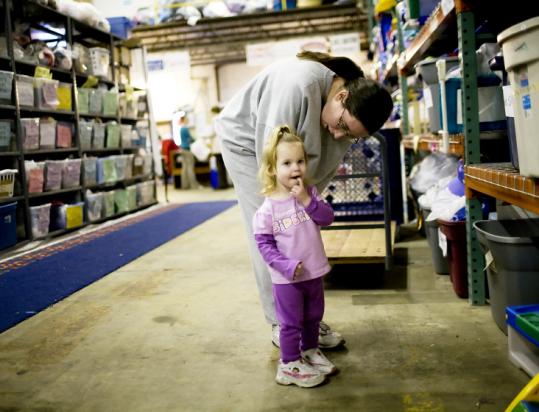 At five months pregnant with her third child, Jill Maker of Lowell unexpectedly finds herself, her husband, and her children homeless and forced to sleep in the hallway of her in-laws' house.

The bank recently foreclosed on the building in which they rented an apartment, and now they don't have money for a security deposit for another place to live.

"A lot of people don't think they're going to get into this situation, but they do, and once you get there, it's, like, what am I going to do now?" said Maker. "It's all been downhill since then."

As the country sinks into an economic depression, the 30-year-old finds herself among the many renters and homeowners around the country suffering because of the mortgage meltdown.

The housing market in seven communities northwest of Boston - Billerica, Dracut, Lawrence, Lowell, Medford, Methuen, and Woburn - today appears headed for deep trouble, judging by the number of homes being foreclosed by lenders. That could spell difficult times ahead for local residents.

Billerica this year saw 51 foreclosures from January through November, while there were 62 in Dracut, 437 in Lawrence, 339 in Lowell, 52 in Medford, 99 in Methuen, and 39 in Woburn, according to the Warren Group, real estate specialists who track foreclosures, in a recent report.

The numbers continue a two-year upward trend, with the communities already having had a glut of foreclosures before the latest figures became available. In 2007, from January through November, Billerica had 37; Dracut, 45; Lawrence, 192; Lowell, 249; Medford, 27; Methuen, 31; and Woburn, 21, the report shows.

Other northwest suburbs had more modest numbers of foreclosures; Dunstable and Carlisle each had only one foreclosure during the same time period.

In all, suburbs in this area saw a total of 1,368 foreclosures from January through November in 2008, compared with 781 during the same period in 2007.

ERA Morrison owner and Realtor, Ronald C. Morrison, whose company has offices in Acton, Ayer, Billerica, Chelmsford, Dracut, and Lowell, said he doesn't see a turn around any time soon in the distressed cities and towns.

Relief could possibly come from federal government bank bailouts and homeowner assistance, but that could take time, said Morrison. "It's like 'Waiting for Godot,' " he said, referring to the classic stage play centered around the drama of waiting for a character named Godot, who never comes. "It's tough because of the fact that in Washington, they're continuing to fight each other about what to do."

Foreclosures generally hurt blocks or neighborhoods, particularly when the vacant properties are allowed to go to seed, Morrison said. Unsightly houses and yards can bring down property values nearby, and lure crime. Morrison said his agents are discouraged in some neighborhoods from advertising that a house is on the market, since even putting out a "For Sale" sign is an invitation to thieves to loot an empty house of copper wire and other valuables, or to vandals to break a window.

In the face of the crisis, municipal officials say they feel almost powerless about what to do to help homeowners.

The Lowell City Council has taken a vote on a resolution to remind banks that, under the city's bylaws, they have a statutory obligation to keep foreclosed properties in good repair, said Mayor Edward C. Caulfield.

Caulfield said he believes most local banks have followed the rules, but some national banks have not. He declined to name them.

He said he feels there is not much more the city can do. "It's a sad situation," he said. "It's a problem throughout the country. I've never seen it so bad. Hopefully we can get over this recession."

Still, Caulfield said he sees signs of hope in attempts by community advocates to help victims of the crisis, such as the Merrimack Valley Foreclosure Prevention and Home Preservation Coalition.

The group uses a Lowell storefront to advise home owners delinquent on their mortgages how to work with a bank to prevent foreclosure by developing more affordable terms on monthly payments.

A year ago, counselors saw about five clients per month, but that number soared last September and is now at about 40 per month, said Emily Rosenbaum, executive director of the Coalition for a Better Acre, a member of the Merrimack Valley group.

Rosenbaum cautions home owners to seek advice before foreclosures, because it's too late afterward. And, sadly for Maker, whose landlord could not make mortgage payments and lost her building to foreclosure, the coalition does not have solutions for renters.

Maker said she has little income. She can work only part time because of problems with her pregnancy. At the same time, her husband's Social Security disability check has been halved for no apparent reason, a situation they are trying to resolve.

Maker said she doesn't anticipate her family will be able to find an affordable apartment anytime soon.

Connie Paige can be reached at connie_paige@yahoo.com.