What will happen to race dogs? 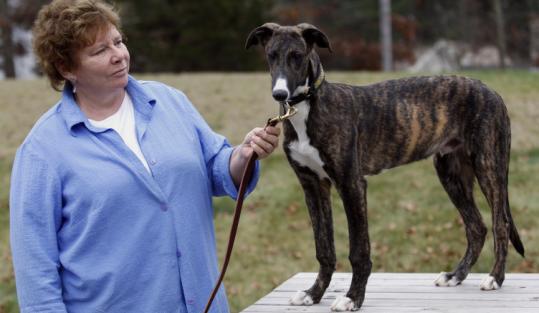 French Larry's history is branded in his left ear. It's the number 35514, which documents his pedigree as a descendant of generations of racing greyhounds stretching at least to 1791, when Tiney, a distant female ancestor with red brindle coloring, won Britain's Ashdown Park Cup.

But French Larry's fate hasn't borne out the promise of his ancestry. Instead, as one of countless castoffs from Florida's 13 greyhound racing tracks, he awaits the healing of his broken toes and a family to adopt him at the Greyhound Friends Inc. facility in Hopkinton.

The reason French Larry is in Massachusetts, 1,300 miles from his birthplace, shows the conundrum the region's greyhound adoption shelters face as they prepare for a state ban on dog racing slated to take effect in January 2010.

With the expected influx of greyhounds from the Wonderland and Raynham tracks in Massachusetts, there isn't much place to put them. Shelters already struggle to house dogs that are sent from racetracks across the country, and even as far away as Ireland.

"I can tell you from all of the adoption agencies I know of that there is little more room anywhere," said Michael McCann, president of the Greyhound Project, a Framingham-based nonprofit organization that supports and promotes greyhound adoption nationwide. "They're overflowing."

Louise Coleman founded Greyhound Friends in the mid-1980s, just a couple of years after she brought her first adopted greyhound to live in her small Harvard Square apartment. Since the organization moved to its Hopkinton location in 1987, she has facilitated thousands of adoptions.

She said that she regularly receives calls from dog owners in West Virginia, the Midwest, and Florida, asking if there's room at her 22-kennel shelter. Florida has 13 of the nation's 30 greyhound racing tracks, and an estimated 9,000 to 15,000 dogs, according to McCann; the next highest number of tracks in any one state is three.

"Lots of people are concerned and asking what the impact would be with dogs in Massachusetts," said Coleman, who said she's had a big increase in curious visitors at the Hopkinton shelter since the racing ban was approved by voters in the Nov. 4 election. "We try to tell them the dogs will go out of state anyway."

"Out of state" means a couple of things. First, greyhounds don't usually race at just one track. If their ability to win races decreases and they still "have some run left," they'll be sent to less esteemed tracks where competition isn't as stiff.

"Right now, the vast majority of dogs that race here in Massachusetts go on to race at other tracks after competing locally," said Christine Dorchak, president of GREY2K USA, one of the pivotal organizations that pushed to ban dog racing in the state.

But it's the animals who won't be able to race on the national circuit - greyhounds who "grade out" -who may also be headed out of state if local shelters don't experience miraculous increases in funding and capacity.

"The East is where most of the tracks are," said McCann. "We have to move dogs out of New England."

Under the new state law, tracks must stop operating in Massachusetts by Jan. 1, 2010, a date that organizers hope will allow enough time for homes to be found responsibly and gradually for the displaced dogs, said Dorchak. Employees at the Raynham track, however, have launched an effort to delay the ban for two years.

Though adoption advocates may feel personally gratified by the ban's passage, they say little about their feelings for fear of appearing anti-racing and souring their crucial relationships with dog owners. They also wonder how they'll cope with it.

As race attendance has declined at the region's racetracks, both in New Hampshire and Massachusetts, the facilities have started closing their doors for the winter, something that was unthinkable when the sport was booming.

This means that every fall and winter, agencies like Greyhound Friends are overwhelmed with dogs in need of adoption.

The economy is squeezing shelters in another way, too. Families who once had the means to care for adopted pets are returning them to shelters, or not adopting at all.

As the economic outlook remains bleak for racetracks, and dogs like French Larry stream in from faraway places like Florida, space for newly retired Massachusetts dogs will remain limited at best, forcing shelters to maintain their juggling acts of placing greyhounds from disparate origins.

The way Coleman sees it, she's like an air traffic controller, but with dogs instead of planes: "They're always out there, circling."