A medley of Asian cuisines 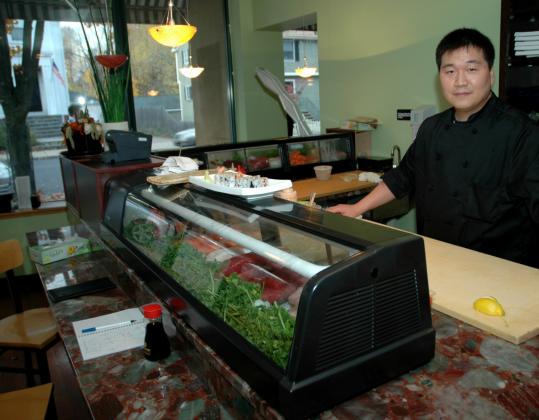 Tucked behind a small storefront just outside Medford Square, Sei Bar is one of those neighborhood restaurants that are far bigger inside than they appear outside. Not only is there a second dining space behind the one glimpsed through the windows, but the expansive menu highlights the cuisines of Japan and Thailand.

Jen Lin, a second-generation Asian chef, opened Sei Bar more than five years ago and recently expanded the area around the original sushi bar to include a full-service bar, two differently appointed dining areas, and three rooms for private parties. Lin, who lives across the street, is a master sushi chef who learned Chinese cooking from his father and studied Thai cooking because he was once sweet on a Thai girl.

Sei Bar features a range of Asian fare, including pad thai, teriyaki, tempura, and sushi, with an emphasis on special maki rolls and elaborate sushi/sashimi dishes, such as the all-hands-on-deck Sei Bar Love for Two, served in a wooden boat ($40.20).

Many of the dinner dishes come with miso soup, salad, and rice, so bring an appetite. On a recent visit, the combination appetizer ($10.20 regular and $18.20 deluxe) was a delightful surprise. The crab rangoons were a precise meld of crispy and creamy, the Thai rolls were filling, and the strips of beef kushiyaki and boneless spare ribs were thick, rich, and chewy, with a marvelous flavor. With the plump chicken wings, the dish was a meat-eater's delight.

However, our party included one vegetarian who found the vegetable tempura ($6 and $12) ordinary and a bit soggy, although the vegetables were not overdone and were served piping hot. Much better - though it was small comfort to my friend - was the chicken udon noodle stir fry ($9.20) with its tender chunks of chicken and thick, chewy noodles.

The salmon jade ($16.20) was a disappointment. The salmon was mushy and swimming in a somewhat cloying sauce. However, the mixed vegetables that accompanied the dish - often an afterthought in other places - were crisp and tangy and were gobbled down to the last morsel.

Sei Bar has a number of specialized rolls created by Lin in response to the tastes of his neighborhood customers. The Medford maki ($9.95), for example, is a mixture of textures, with soft grilled salmon, crabmeat, and avocado mingling with cucumber and crunchy bits of tempura crumbs. Other specials include the Mattapillar maki, which combines cooked scallop, crab meat, cumber, spicy mayo, and tempura crumbs topped with avocado ($9.95), and the Dragon maki, a California maki wrapped with grilled eel ($9.50).

Service was cheerful and helpful, with two lapses. We opted for one of the "create your own" Thai entrees, with your choice of vegetables, tofu, chicken, beef, and seafood and which range from $10.20 to $15.20. We were eager to try the mixed vegetables and fresh mango. Alas, no mango, so we ordered the vegetable and tofu with cashew nuts, which satisfied our vegetarian friend and some of us carnivores as well.

Then, after the waitress suggested we try both the green tea and the red bean mochi ice (a kind of ice cream packed in a soft, doughy shell), she returned to say there was no green tea mochi left. So we split the red bean mochi ($3.15), which turned out to be a nice, light way to end the meal, punctuated by a complimentary dish of fresh pineapple.

With its range of options, Sei Bar is the place for sushi lovers to bring friends who insist they won't eat raw fish. Get them to try a Medford maki and they might discover they like sushi after all.