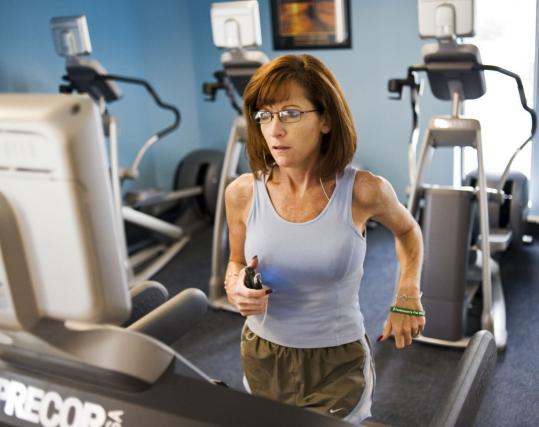 Mary Sontz, 42, of Portland, Maine, worked out at a gym in Westbrook, Maine, recently. She said likes the data aspects of PatientsLikeMe.com. Sontz was diagnosed with Parkinson's disease two years ago. (wiqan ang for the boston globe)
By Carolyn Y. Johnson Globe Staff / November 16, 2008
Text size – +

When Italian researchers published a small study in February saying that lithium, a medication used to treat bipolar disorder, appeared to slow the progression of Lou Gehrig's disease, others with the devastating neurodegenerative disorder began to try it themselves. They did not have years to wait for a more conclusive study.

More than 200 of them went a step further, using the Internet to report the progress of their disease while taking the drug. The result is an online clinical trial of sorts, not one conducted by doctors at prestigious hospitals according to rules intended to ensure scientific rigor and patient safety, but by ordinary people who want others to benefit from their experience.

"We want to keep track of how people are doing on it. It's important for the whole community," said Karen Felzer, a seismologist who jointly initiated the online lithium study because her father suffers from the disease, also known as ALS, or amyotrophic lateral sclerosis.

Online social networks, blogs, and homemade videos have, for better or worse, created user-generated upheavals in a variety of industries, propelling information forward ever faster.

People have long logged on to bulletin boards and forums to talk with other patients about disorders, symptoms, and treatments, and to give one another emotional support. But enabled by new tools, some are using the Internet for a more data-based exchange aimed at creating a new way to share information and even test treatments.

In healthcare, social networks are "useful but not that interesting. Instead it is using the network to create this data engine that patients can share amongst themselves and learn what happens to other patients," said Ben Heywood, a founder of PatientsLikeMe, a Cambridge social network website trying to move medicine forward with user-generated data.

Search giant Google recently unveiled Google Flu Trends, a service that uses people's search terms as a way of predicting flu prevalence in different regions. Flu-related searches may spike before doctors report flu numbers to the Centers for Disease Control and Prevention. During the last flu season, Google shared the information with the CDC and was able to predict flu levels one to two weeks faster than published reports.

PatientsLikeMe.com is an online network on which about 20,000 patients sign in to different disease communities to report, in a uniform way, on their progress, symptoms, medication, and even lifestyle adjustments. Profiles look more like medical charts than normal social networking pages, and the website automatically filters the data it gathers, letting patients search easily for others who experience their constellation of symptoms or take the same dosage of medicine.

The website - which plans to make money by selling aggregated, anonymous patient data to companies - is an experiment in healthcare that has attracted attention beyond the Internet startup world. In September, the journal Nature Biotechnology took note: "A rich data set is thus being captured that is unlike anything else coming out of healthcare . . . the user-generated medical data paradigm could also have profound implications for drug developers and clinical development."

Through PatientsLikeMe, such ALS patients as Ken Patterson Sr. of Titusville, Fla., have been tracking and sharing their progress on lithium since March. Patterson says his ALS has stabilized and the side effects are minor compared with the benefits he sees.

"The problem with waiting for a larger study is [that] time is something ALS patients have little of," Patterson wrote in an e-mail. "If my information benefits scientists in finding a treatment or a cure, even after I die, then it was worth the sharing of personal information."

Mary Sontz, 42, of Portland, Maine, likes the data aspects of the website. She recalls complaining to her doctor that the medication she took for young onset Parkinson's disease was causing her to rapidly lose weight. Because she tracked her weight and medication on PatientsLikeMe, Sontz was able to find a dozen other women her age who had experienced the same side effect. Her neurologist, William Stamey, said that he sees value in using the Internet in such a way.

"The good part is it's a wonderful yardstick - you can compare yourself against others and gauge how they're doing," Stamey said.

But there are downsides to trying unproven treatments and looking to individual experiences for medical advice. The course of a disease can vary widely between individuals, making it difficult to disentangle the many factors - including a new drug - that might influence its progression. There are also risks to taking drugs when they have not been fully vetted by clinical studies.

Felzer's father, for example, stopped taking lithium this summer because it didn't seem to help and had side effects.

Dr. Merit Cudkowicz, ALS clinical director at Massachusetts General Hospital, cites the example of minocycline, an acne drug that some preliminary data had suggested might benefit ALS patients. Later, she said, a study showed that the drug accelerated the disease.

"The bottom line is we have to do these studies that have a comparison group - and they do take a long time to start up," Cudkowicz said. "I can see [the frustration], as someone who cares for patients with ALS."

Even so, she said, there are no short cuts. To develop more treatments will require studies in which patients are randomly and blindly assigned to a group taking either treatment or placebo. Cudkowicz and others will soon begin recruiting patients for such a trial of lithium in ALS patients.

But for now, the biggest set of data available on lithium use by ALS patients comes from the reports on PatientsLikeMe.com. So far, the data - which are still being gathered - indicate that the drug is considerably less effective than indicated by the Italian study, published in the journal the Proceedings of the National Academy of Sciences. While that discovery has been disappointing, the online reporting is still useful, say its backers.

A drug such as minocycline was taken for years while patients waited for the clinical trial that eventually showed it could actually harm them, said James Heywood, cofounder of PatientsLikeMe. But less than a year after the Italian lithium study was published, "we now have data in our system on over 100 patients who have been on a drug long enough to demonstrate the hope of that drug was not what was originally assumed - and that means thousands of patients won't take it."