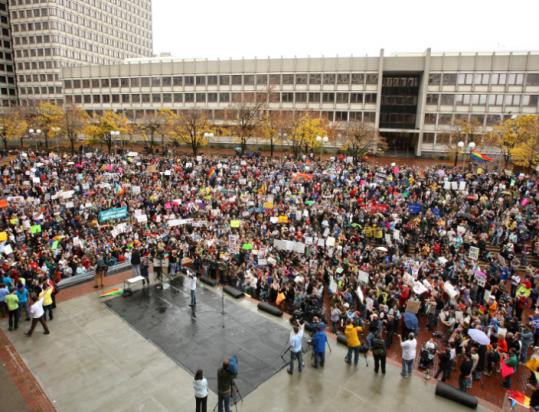 Thousands of people rallied outside Boston City Hall yesterday to voice their support for same-sex marriage and protest the recent California vote that made it illegal in that state.

Despite intermittent rain, about 4,000 people from Boston and beyond attended, organizers estimated. They gathered around a stage as activists from the National Gay and Lesbian Task Force and MassEquality spoke, along with state and local politicians.

Briellen Daggett said she and her girlfriend had planned to move to California next year.

"I absolutely will not move there," unless the law is reversed, said Daggett, 20, of Middleborough.

Massachusetts and Connecticut are the only two states that allow same-sex marriage.