THIS STORY HAS BEEN FORMATTED FOR EASY PRINTING
STARTS & STOPS 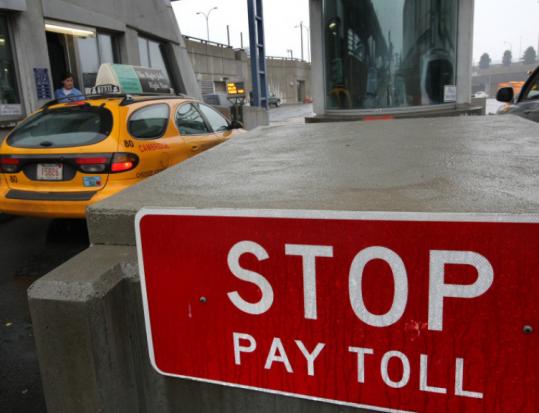 Two years ago, during Deval Patrick's run for governor, he identified what he saw as the disjointed nature of the state's transportation policy.

Why would then-governor Mitt Romney attempt to dismantle toll booths on the western turnpike while the MBTA looked at a fare increase? Wouldn't that divert more people from public transportation to cars, fouling up the environment, and cluttering the roads with traffic?

Last week, Patrick introduced new details of a transportation plan that includes getting rid of tolls on the western portion of the Massachusetts Turnpike within two years. This weekend, the MBTA raised parking rates at commuter lots, a $2 per day increase that many commuters say amounts to a fare increase.

So has Patrick taken a page from Romney's book?

If anything, "those numbers" Patrick referred to in 2006 have gotten worse, with the Turnpike Authority and Massachusetts Bay Transportation Authority in even more dire financial shape than two years ago.

Patrick controls the MBTA board, which is trying to manage its way out of a financial crisis and passed the parking increase because it could not afford to pay its unionized employees without borrowing even more money. The Turnpike Authority board is also controlled by Patrick appointees, and has similar struggles with giant budget gaps. That board passed extensive toll increases Friday, with Patrick's reluctant blessing. But to soften the blow, Patrick promised, as part of a turnpike reorganization, a plan to kill most tolls west of Route 128 within two years.

"There is a difference between talking about taking down tolls as a political stunt during an election and doing it as part of a larger structural realignment of our transportation systems," said Kyle Sullivan, Patrick's press secretary, in an e-mail.

Romney's proposal came when his lieutenant governor, Kerry Healey, was running against Patrick for the top job. Patrick's toll take-down comes amid an unpopular toll increase in Greater Boston.

Whatever the politics of the moment, will the potential effect of raising MBTA fees and killing western tolls be the same, persuading more commuters to give up on public transportation?

Many readers have e-mailed me over the past few weeks, worried the higher parking rates at commuter lots would make the T unaffordable and less attractive when the cost of a monthly train pass is factored in. Some said they were considering getting back in their cars, especially since gas prices have plummeted again.

But those commuters who live along the turnpike and rely on it to get to Boston will have a tough choice. They'll pay more, whether they ride the T or take the turnpike. That's because, even if the tolls west of Route 128 go away in a year or two, the ones inside Route 128 are about to go way up. The turnpike authority board gave tentative approval on Friday to a $2 cash fee at the Allston-Brighton and Weston booths, up from $1.25. And the board approved a $7 cash charge at the Ted Williams and Sumner tunnels, up from $3.50, also subject to public hearings and a final vote. There are discounts that bring down costs for commuters who get a Fast Lane pass, but it will still cost hundreds of dollars more per year to use the state's tolled roads for regular commuters.

Whether the toll takedown affects T ridership or not, many political leaders and transportation advocates have criticized the proposal, noting how desperately the state needs cash. In addition to lost income, the logistics of reconfiguring roads would cost an estimated $100 million. (Patrick's proposal would still leave tolls up at Sturbridge and West Stockbridge in an effort to charge New York and Connecticut drivers for the pleasure of entering our state.)

The Conservation Law Foundation filed an environmental challenge to removing the western tolls two years ago. The issue died before their application for environmental review was taken up. But the organization, which has used state and federal laws to reshape state policy on issues as significant as the Big Dig, plans to file a similar challenge against removing toll booths this time if needed, said Carrie Russell, the foundation's staff attorney.

Russell said she applauds Patrick for taking on the challenge of fixing the state's $20 billion transportation problem.

Russell and others, especially residents of western suburbs, say the state should look at getting rid of all tolls and increasing the gas tax, which has not gone up since 1991 other than a special 2.5 cent underground storage fee. Last year, a state commission looking into the massive transportation funding problem recommended raising the tax 11.5 cents and indexing it to inflation. In the long term, as people buy more fuel-efficient cars and drive less, the commission suggested phasing out the gas tax and switching to a network of electronic tolls that would charge people 5 cents per mile on roads throughout the state.

The gas tax question has not been much discussed. Key legislators said it was a bad time for taxes, as did Patrick, who has said he worries about adding another tax during tough economic times. Much will depend on how drivers react to volatile gas prices, which soared above $4 a gallon this summer and now are dropping near $2.

But as fees and tolls continue to rise, the attention on the gas tax will only grow.

Send complaints, comments, or story ideas to starts@globe.com. The column and a listing of major road closures and other transportation advisories can be found at www.boston.com/starts.