THIS STORY HAS BEEN FORMATTED FOR EASY PRINTING
DORCHESTER

African Grand Lodge faces a milestone and a challenge

Many seek return to service roots 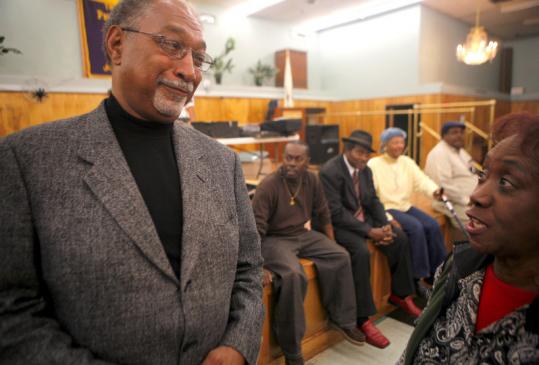 Their portraits hang on the Prince Hall Grand Lodge's Wall of Honor. Distinguished gentlemen, many of them in dark suits and in top hats, they are past grand masters of the country's first African Grand Lodge, which celebrates its bicentennial next weekend.

The lodge's history goes even deeper than these men and the past two centuries, though, to a former slave turned activist named Prince Hall, who wanted to join the white Freemasons but was rejected because of his skin color.

In 1775, Hall gathered together a group of 14 men, and they became the country's first black Freemasons, following the fraternity's core tenets - good character among men, sound ethical values, and brotherly love. The group thrived, and 33 years later blossomed into a grand lodge. Some of its early members were buried in Prince Hall Cemetery near Broadway in East Arlington. Two centuries later, the grand lodge supports 25 sublodges throughout Massachusetts as well as in Maine, New Hampshire, the Netherlands, and Trinidad and Tobago. There are 47 Prince Hall grand lodges nationwide and more than 300,000 members globally.

Yet even as it hails a milestone, the Prince Hall Grand Lodge of Massachusetts is at a crossroads. Membership is dropping, its rank and file fraternity is aging - the bulk of its 1,500 members range from 55 to 80 - and younger members are pressing the older ones to return to their community service roots: activism, charity work, and volunteer service.

"Masons do a lot of good things for the community," said Leslie A. Lewis, the 66th grand master of the Prince Hall Grand Lodge of Massachusetts, and regional director for security for the Massachusetts Trial Courts.

Hall, who lived briefly in Medford and is buried on Copp's Hill in the North End, left a powerful legacy. He rallied blacks to create the first black school in Boston, fought for the rights of former slaves in Massachusetts, and petitioned to permit blacks to enlist in the Army. Some of the lodge's younger members cite his deeds when they envision the lodge's future.

"We are a group of younger men who are trying to get back to what Prince Hall started," said Gary Goorahlal, 39, a businessman who heads Widow Son Lodge No. 28.

Lewis recognizes the challenges. He says the grand lodge has addressed critical issues in the community over the years by awarding thousands of dollars in scholarships, opening its building site for community events, and giving out turkeys and Christmas gifts. Plans for a mentoring program are in the works.