Tree vendors fear consumers will do the unthinkable: go without 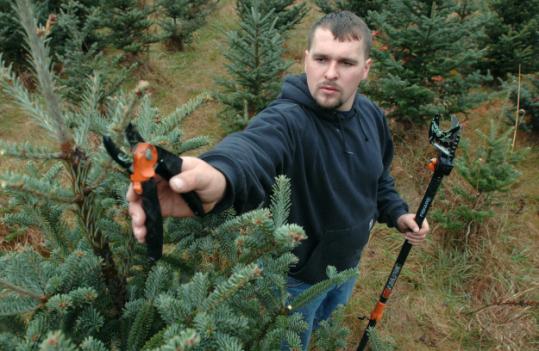 Oh, Christmas tree. Not you, too.

In the latest sign of gloomy economic times, some Christmas tree vendors are worrying about their bottom lines this holiday season, wondering whether consumers looking to save money might cut wreaths, garland ropes, and, yes, maybe even Christmas trees from their family budgets.

"I think that's the big unknown," said Crystal Card, whose family owns GreenWood Tree Farm in Billerica. "I hope that it doesn't get that bad. But I'm sure some people will be afraid with things kind of down, which is sad to think."

Christmas trees are generally believed to be recession-proof. No matter what, people will buy them, the thinking goes. But this year, some wholesalers - who sell trees to garden centers, community groups, and other vendors months in advance of the Christmas crush - say they're seeing evidence that some consumers are rethinking their Christmas tree purchase this holiday season.

Orders this year are off about 25 percent, said Illan Kessler, president of North Pole Xmas Trees in Nashua, which typically sells 30,000 trees annually. Those vendors buying trees are often ordering lower-quality products, Kessler said, reflecting worries that consumers may not be willing to pay big money for the perfect tree this year.

Corporations are cutting back as well, Kessler added. It seems that a small tree, or no tree at all, will do the job at the company holiday party this year.

Amid plenty of reasons to be concerned, some remain optimistic about the fate of Christmas trees this holiday season. The National Christmas Tree Association and industry groups across New England are projecting strong sales in the weeks ahead.

In a world where stocks are down, home foreclosures are up, and no job feels safe, Nigel Manley argues, who wouldn't want to spend a winter evening basking in the warm light of a twinkling, fresh-cut Christmas tree?

"I think it's one of the last things that people hold onto because of the tradition of Christmas," said Manley, director of The Rocks Christmas Tree Farm in Bethlehem, N.H., where tree orders are up this year. "Just having that evergreen in your home is really a symbol of hope."

There are few things more representative of life in New England than heading out to the country on a cold December afternoon, walking among fir trees with snow crunching underfoot, and then choosing the perfect tree to ferry home on top of the car.

It is a tradition often handed down from generation to generation, and for many it's a profitable business, too. According to the National Christmas Tree Association, more than 31 million US households purchased a farm-grown tree last year, generating more than $1 billion in retail revenue. Sales of artificial trees nearly doubled, however.

The feeling among many New England tree farmers is that an economic crisis isn't going to change the market very much. Barbara O'Connor, who co-owns Sleighbell Christmas Tree Farm in Sutton with her husband, Paul, said tree farmers are optimistic by nature. They wait several years for a tree to grow, toiling and sweating over it, just to cut it down and sell it.

Carol Fleming, a Wakefield woman and a secretary at an investment firm, agrees. Despite the troubled economy, she'll be buying a fresh-cut Christmas tree this year like she always does, she said.

And so will James Tracy, a 27-year-old Somerville man. "I'm not going to let it get me down," he said of the grim economic times.

But others, like Jensen Ramos of Dorchester, a cashier, are less sure. "Maybe we'll have a tree," he said. "Maybe not."

It's that kind of thinking that has farmers like Times a little nervous.

Times and others who buy precut trees from wholesalers have ordered smaller trees this year, believing customers will be more frugal.

Tree farms across Massachusetts are cutting back on the number of wreaths and garland ropes they're making, speculating that customers, still up for buying a tree, might not want to spend money on a wreath as well. And many vendors have decided not to raise their prices, even as the cost of fuel and fertilizer has doubled or even tripled.

"Everything," said O'Connor, "has gone up in price."

For those reasons, Casey Vandervalk, president of the Massachusetts Christmas Tree Association and owner of Vandervalk Tree Farm in Mendon, said profit margins for many farmers will shrink this holiday season. But Vandervalk, 57, counts himself among the optimistic.

Some vendors cut their orders of precut trees this fall, but Vandervalk increased his, ordering 700 instead of 500, to supplement the 1,000 live trees he expects to cut down at his farm. He believes the fact that some lots ordered fewer trees this year will lead to a shortage, increasing demand. And with extra trees on hand, Vandervalk will not only be poised to meet that demand, he said, but also to make up some of the money he's losing by freezing his tree prices for the third year in a row.

"I'm going to work a little harder, a little longer maybe," he said. "I may have to stay open a few extra days. But that's what we're going to do."

In a few weeks, it will be clear whether Vandervalk and others made the right decisions. But some will have to wait longer to know how they fared in the 2008 Christmas tree market.

Wholesaler Charlie Carroll, owner of Christmas Trees Worldwide, a business based in Norfolk, said private vendors who bought trees from him have until Dec. 20 to pay him. If their sales are good, he'll be paid quickly. If they are not, well, Carroll may be in for a long, long winter.