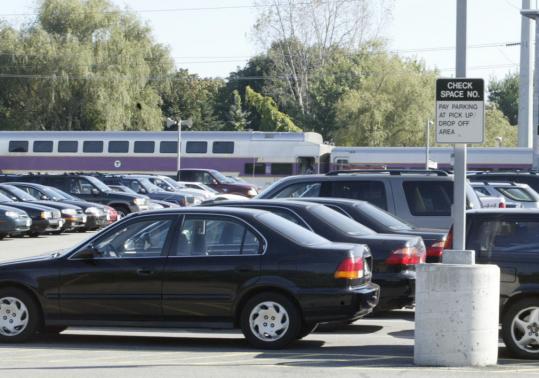 The daily fee at Westborough's MBTA lot, and all other T parking facilities, will rise by $2 on Saturday. The agency says it needs the money to pay $53 million in back pay to its workers. (THE BOSTON GLOBE/file 2004)
By Megan McKee Globe Correspondent / November 13, 2008
Text size – +

Every weekday morning, Kathie Gonzales has a choice. She can drive her car to the West Natick commuter rail station to catch the Boston-bound 6:55 train - any later and she won't get a parking spot - or drive an extra 10 minutes to the Framingham station, where she chances stumbling upon a drunk or passed-out person in the station's elevator, something that's happened more times than she would like.

Gonzales' unappealing options add to her frustration, shared by many of her fellow commuters, with the MBTA's recent announcement that all of its parking lots and garages will raise their rates by $2. With the increase, to help cover court-ordered back wages for transit employees, the daily parking fee at MBTA commuter-rail lots will be $4.

"I don't understand why we're getting hit," said Gonzales, a 58-year-old Framingham resident who has been commuting by train for four years to her job as a legal administrator in Boston. "It's not our fault that the MBTA's poor planning or whatever caused an overtime situation with their employees."

In the latest round of bad news to emanate from the financially strapped Massachusetts Bay Transportation Authority, officials announced that the parking fee increase will take effect Saturday.

Spokesman Joe Pesaturo said in an e-mail that commuter-rail parking rates have been unchanged for six years, that the median cost of parking in downtown Boston is $33, and that the agency had to find a way to cover part of the money it owes workers who were recently awarded $53 million in back pay, among other funding needs. Already shackled by $8 billion in debt, Pesaturo said, the transit agency can't borrow its way out of the situation, and has to raise the money from other sources.

"The decision to ask customers to pay more for parking was very difficult," Pesaturo stated. "The MBTA . . . has been left with the unenviable choice of seeking fee increases or reducing services."

For some riders like Gonzales, the MBTA's troubles seem abstract and distant when a $40 monthly increase for parking is added to shrinking 401(k) balances and the daily mill of bad economic news.

Gonzales says the trains she rides have people packed all the way from the vestibules down the aisles; security is nonexistent at the downtown Framingham station; and the train service has been abysmal.

Doubling the parking fee makes it particularly irritating, said Gonzales. "Make sure your trains are on time and I have a seat before you start charging extra."

Pesaturo said the MBTA's board of directors this year approved the purchase of 75 double-decker passenger coaches to help deal with crowding issues. He added that the state's recent move to acquire the train tracks between Worcester and Framingham, among other sections of the state, will lead to improved track and signal maintenance and better on-time performance for commuter-rail service. Pesaturo also encouraged Gonzales to call the Transit Police with any information about individuals loitering in a station.

Framingham Selectman Dennis Giombetti said his board has been fielding calls from concerned residents asking how the town can help mitigate their parking costs. And the town has an answer.

"There's a parking garage near the station that is underutilized," Giombetti said, adding that officials are considering offering monthly passes to residents for the town-owned garage, which is across the street from the Registry of Motor Vehicles office. The passes would cost less than a month's worth of MBTA parking. "I think it would be a win-win," he said.

"Who likes an increase in their expenses?" said Ashland resident Drew Namiot, 43, who takes the train from Framingham or Ashland to his job in Boston at Fidelity Investments every day. "On the other hand, I'm not sure the last time they increased fees. You also understand the MBTA is in difficult financial circumstances."

It may be that Namiot is not alone in his understanding. Legislators and town officials in Wellesley and Newton said their phones and e-mail in-boxes have been devoid of constituent complaints.

"I think you're seeing an environment where fees are rising everywhere," said Newton Alderman Stephen Linsky, who chairs his board's Public Safety and Transportation Committee. Linsky said he anticipates outcries only if people start parking in residential neighborhoods to dodge the Riverside parking lot on the subway's Green Line, where the daily fee will be $5.75.

Linsky said Newton officials are prepared to tighten residential parking restrictions if things get out of hand, something the city has done in the past.

But before anything like that happens, commuters parking in MBTA lots will be forced to contend with not only the stark realities of smaller bank accounts but the more mundane realities of commuter rail parking.

Train Stopping is a blog devoted to the experiences of two longtime riders of the Framingham-Worcester commuter rail line. Both writers, who go by Train Rider and Commute-a-holic, meticulously record life on their rides into Boston and monitor news outlets for any coverage pertaining to their commute.

In an Oct. 15 posting, right after the MBTA announced the fee increase, Train Rider blogged about the office uproar over the fees and how out-of-touch MBTA officials are: "If Dan Grabauskas or if his management team actually used the T to commute to work, they would know that there really is no easy way to get four $1 bills into the slots at many commuter rail stations."

For Gonzales, the Framingham commuter, the message to the T is simple: "If you're going to start taking more money from us, start giving us something in return."