THIS STORY HAS BEEN FORMATTED FOR EASY PRINTING
SHIFTING GEARS

For cyclists seeking simplicity, the fixed is in 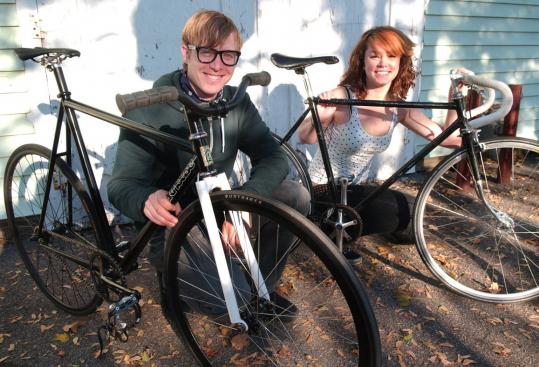 Marty Walsh with Elizabeth Ezell at his store, Geekhouse Bikes, in Allston, where he makes fixed-gear bikes. Users cite fewer parts, and so fewer breakdowns, as among the reasons behind the rise in popularity for a design long favored by bike couriers. (Patricia Mcdonnell for the Globe)
By Leighton Klein November 9, 2008
Text size – +

It was late at night and I was riding home, tired. The mild slope of the Boston University Bridge seemed like a pothole-strewn mountain, and the curve of Putnam Street to Harvard Square, with nary an inch to spare for cyclists, took forever. Then at Mount Auburn and Massachusetts Avenue, I saw a flash. A cyclist flew by, and I got a jolt of adrenaline.

The bike was like a greyhound, narrow and forward-leaning, the essence of motion. Its rider had a U-lock stuck in his back pocket and a black T-shirt over his shoulders. He sat straight up in the saddle, easily smoking a cigarette. Though I'd stayed back, he'd sensed my presence, and the cranks started to churn. His bike - unencumbered by derailleurs, levers, or even conventional brakes - leapt forward. In a moment he was gone, and I was on my own again.

I'd just met a member of the fixed-gear tribe.

As a rule, the machines we make move from simplicity to complexity. Your grandmother's pen became your father's Selectric typewriter, and if your laptop has anything less than a gig of RAM, you're feeling short-changed. Bicycles have gone through a similar evolution, starting as wooden "boneshakers" and ending up as carbon-fiber rockets. But they're one story where the clock doesn't always run in one direction.

"When I started riding fixed in '91, '92, there were only two or three other kids doing it," said James Norton, 39, co-owner of Revolution Bicycle Repair in Jamaica Plain. James was a courier then - he says he worked pretty much full time until last year, when he opened the shop, then on Atlantic Avenue in Boston - and he and his friends had gotten tired of breakdowns. Taking inspiration from track bikes, they removed everything that wasn't necessary. Much of the early equipment was improvised to a degree that boggles the mind, but it worked.

Within three to four years, James said, three-quarters of Boston's couriers had switched to fixed-gear bikes.

And it didn't stop there, far from it. Riders in New York and other cities had been doing the same thing, and, nearly 20 years later, what was once the exclusive reserve of couriers is now seriously mainstream: informal counts reveal fixed-gear bikes pretty much everywhere.

Sometimes it's just a rusty conversion, other times a dazzling silver Swobo with a faux-leopard cover for its lock and chain. In certain spots of Boston, there are even more fixed-gears on a rack than conventional ones.

The attraction is simple, literally. Fewer parts, fewer breakdowns. With a fixed-gear bike, the cog on the back wheel is attached the same way the one on the crank is - solidly. If your bike moves, so must the pedals. That provides a wonderful sense of connection to the road, but at a price. Coasting, that childhood favorite, is out, and learning to brake with the legs takes time. For many, though, the feel of the ride is unbeatable.

"It's very much like it's an extension of the self," says Taylor Knight, 23. He's studying sociology and history at Northeastern University and started riding fixed three years ago. His first bike was a "conversion" - take an old bike, strip off everything, and swap the wheels (if that's in the budget). Now he's riding a blazing-red EAI Bareknuckle, a purpose-built fixed-gear bike.

Lex Russo, 22, likes the amount of control riding fixed gives him. "There's an immediate connection," he says. "And it's just fun." A student at Mass. Art, he's been riding fixed-gear bikes exclusively for three years, and now gets around on a 1987 Shogun conversion.

A more recent convert is Elizabeth Ezell, 22. From San Jose, Calif., she's been in Boston four years and now calls Inman Square home. What's she riding? A men's Ross, from the mid-'70s by the looks of it.

"I bought it a couple years ago as a single speed," said Ezell, who's studying psychology at Harvard Extension.

"I spent the past year getting it where it needed to be, and just recently converted it to a fixed gear." She has a leg up, so to speak, having worked as a truck-racing mechanic in California.

"I've always been mechanically inclined, and I didn't want to be a damsel in distress."

The next step is building your own bike - from scratch. That's what Marty Walsh, 29, does. Originally from Northborough, he now lives in Allston and runs Geekhouse Bikes, his new frame-building company. He started working at a bike shop when he was 16, then spent time as a stock trader to build up funds for his jump to his own shop.

"I just got rid of my car, so it's my only form of transportation," Walsh said of his bike, one of his own Rockcity models.

As with anything, simplicity doesn't necessarily mean economy. A custom-fit, fixed-gear frame - just the frame - from Geekhouse will set you back $999, and even doing a conversion of a bike you already have isn't cheap.

"People are now more into it for the project than saving money," said Bud Durand, 28, manager of the Cambridge Bicycle Co., which offers a wide selection of fixed-gear bikes and parts.

Among others, he rides a KHS Flite 100 and says that his shop now sells on average 40 fixed-gear bicycles and does 10 conversions a month.

When asked what kind of bike he'd get if money were no object, James Norton doesn't hesitate.

"I already have it," he said, pointing to his mid-'80s Schwinn Madison. Half the paint is gone, the wheels are mismatched, and the fork came out of a different bike altogether - and it's clear he loves it.

While new to the scene, Ezell agreed: "People should ride what they want to ride."

Leighton Klein can be reached at leightonwalter@yahoo.com.