THIS STORY HAS BEEN FORMATTED FOR EASY PRINTING
brookline

2 sides (at least) to every story at Town Meeting 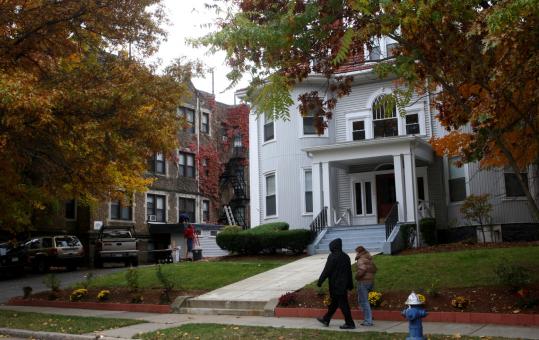 Under current zoning, the home at 134 Babcock St. in Brookline is among the structures that could be torn down to make room for a complex like the one next door. A ''down-zoning'' proposal set for a vote at Town Meeting next week aims to change that. (Joanne Rathe/Globe Staff)
By Andreae Downs Globe Correspondent / November 9, 2008
Text size – +

As part of a twice-yearly ritual, Brookline's Town Meeting members will discuss and vote bylaw changes and budget amendments next week, including several that are likely to generate intense debate and disagreement.

The warrant for Town Meeting, slated to run from Nov. 18 to 20, includes a zoning article for North Brookline, some cost-cutting at the expense of current or former selectmen, sidewalk snow removal, and two proposals for what to do about leaf-blower noise.

Brookline's northern section - the most populated and urban part of town - is again under discussion as residents propose changing zoning for buildings on the edges of their districts or those that represent a particular age or beauty. The tendency in this area is for developers to tear down old homes on large lots to build multiunit apartment buildings that leave little room for trees and grass.

In hearings before the meeting, selectmen heard from several residents involved in the effort, as well as some wanting their property exempted. Planning director Jeff Levine, speaking for the Planning Board, noted that the proposed bylaw for the most part would create "noncontiguous" zoning districts, or spot zoning. Selectmen and the town's fiscal committee have given the bill a thumbs-up; the Planning Board has not.

"The accusation of spot zoning doesn't pass the legal smell test," said Martin Rosenthal, a lawyer in private practice and Town Meeting member. "The opponents of this measure want the highest-denominator zoning," or to build to the highest density lot, rather than to the lowest.

A few affected homeowners have spoken against the article, which they say would not allow them to make minor changes to their homes, or in one case to add a caretaker apartment to a group home. As a result of the latter argument, that home has been taken off the list of properties to be down-zoned.

Another pair of articles on the warrant seek to shave the town's massive unfunded obligation to pay health benefits to municipal retirees. One proposal is to cut off health insurance for selectmen. According to proponents, the town is paying about $70,000 annually to cover three of the five active selectmen and three former selectmen. A second proposal is a resolution to double the $2,500 annual stipend for selectmen ($3,500 for the board's chairman).

"We recognize the need to reimburse the selectmen for the cost of serving," said Roger Blood, one of the proponents. "Really, this emanates from the Override Study Committee's report saying that the top budget challenge facing the town was its unfunded retiree liabilities."

Blood said that while paying health insurance for active selectmen isn't a huge portion of the town's overall $199 million budget, the upcoming retirement benefits - paying for selectmen's health insurance after they leave office - is significant, he said.

"Depending on your estimates of inflation and the like, conservatively, it could add up to $500,000 per selectman," he said, noting that his figures were cumulative.

Another article stemming from recommendations of the Override Study Committee is a home-rule petition allowing the town to issue taxi medallions. The measure, town officials hope, would mean that taxi operators in town would bid on medallions while continuing to pay the cost of their annual inspections. In essence, the town hopes to use one-time income from the medallion auctions to start paying down unfunded responsibilities such as retiree health insurance.

In the quality-of-life column are two proposals to regulate leaf-blowers: one by regulating the maximum decibel levels allowed by any machine, the other by allowing leaf-blowers only during the hours when most people are awake, and only during the spring and fall months when leaves most need to be gathered.

An issue that may stir debate is a proposal to look outside the Fire Department for candidates when the chief steps down. It is current practice to keep searches internal, which proponents argue does not allow for a fresh perspective or for former Brookline firefighters to apply for the job.

Whether to allow a 10-child family day-care operation in Brookline is another issue. According to proponents, Brookline stands alone in Massachusetts in not allowing family day-care centers to serve more than seven children.

A number of environmental bills are also on the agenda, including curbing invasive nonnative plants and switching to green cleaners where possible - something selectmen already voted to do last month.

Potentially less controversial will be passage of annual budget amendments, renewal of several home-rule petitions that would need to be resubmitted to the state Legislature if they do not pass before January, zoning changes proposed by the Planning Board, long-term leases to the Brookline Music School and Brookline Arts Center, and a resolution to honor the Japanese town of Tsuruga, which admitted Lithuanian Jews escaping the Holocaust.