Drivers get charged up about plugging in cars 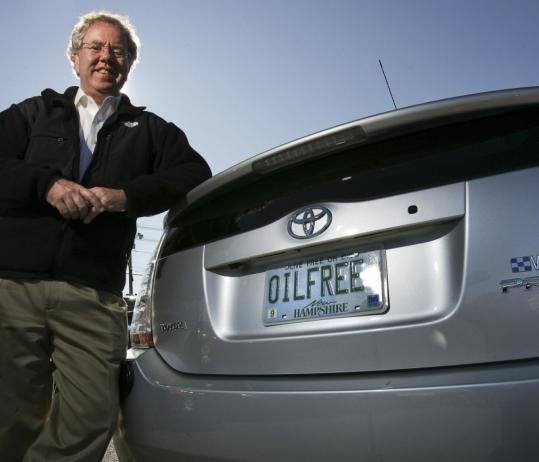 Kevin Curran had a battery produced by A123 Systems installed in his Toyota Prius, making it a plug-in hybrid electric vehicle, at Westborough Toyota. (ARAM BOGHOSIAN FOR THE BOSTON GLOBE)
By Bina Venkataraman Globe Correspondent / November 8, 2008

For some people, driving a hybrid is not enough.

A growing cadre of energy-conscious drivers is leapfrogging auto makers by turning Prius hybrids into plug-in cars, installing an extra battery that comes with a hefty price tag.

Since July, when a Watertown company, A123 Systems, began selling the $10,000 batteries online, at least 200 hybrid owners have had them installed. The six garages in the country licensed to install them have filled their calendars through December.

"If I had 500 of them right now, I probably could have them sold within the next two months," said Don Fahnestock, owner of The Green Car Company in Bellevue, Wash.

The batteries allow drivers of the Prius, already the most fuel-efficient car sold in the United States, to plug in their cars just as they would their cellphones or laptop computers. When fully charged, the battery ratchets fuel efficiency up to 100 miles per gallon for as much as 40 miles at a time, after which the car switches back to running like a regular Prius, which gets about half that fuel efficiency.

Still, the drivers are unlikely to ever recoup the steep cost of the battery in fuel savings, unless gas far exceeds the recent high of more than $4 a gallon or the car is driven more than 250,000 miles.

"It's astounding that people would pay this kind of money," said Peter Tonelli, the owner of Westboro Toyota, the only garage that installs the 5-kilowatt battery in the Northeast.

But for these drivers, saving money is not the point.

Kevin Curran, an electrical engineer from Hollis, N.H., whose son recently returned from his second tour of duty in Iraq as a US Marine, bought the extra battery so he could use less oil. "We have to reduce our oil imports," he said. "This is my small contribution to reduce demand."

Steve Stevens, 64, curator of a Victorian bicycle museum, bought the battery because he wanted to decrease his carbon footprint; he uses solar panels to recharge his car. Philip Urso, a yoga teacher in Charlestown, R.I., converted his Prius because he wants to be on the cutting edge of "groundbreaking" technology. Jean Paul Piovesan, a translator in Ontario, did it because he likes to support companies he thinks are doing the right thing.

Some call these drivers early adopters. Their neighbors and friends call them tech-geeks, eco-freaks, "Pious" drivers, and, more succinctly, nuts - those who are willing to spend what for some people would be several months' salary to tinker in energy efficiency. But the plug-in crowd defies simple labels. James Woolsey, former director of the CIA, owns a plug-in retrofitted Prius (adorned with a "Bin Laden Hates This Car" bumper sticker). Plug-in cars are one of the cheapest ways to clean up the country's transportation sector, he said at a recent appearance at MIT, where he was representing the McCain campaign.

In recent months, several utility companies, local governments, and a group of Silicon Valley CEOs have also modified their hybrid-electric car fleets with the new batteries.

For plug-in cars to reduce carbon dioxide emissions significantly, the electricity that charges the battery must be fueled largely by clean energy, such as wind or solar. Given the typical mix of sources in the US electric power grid, plug-in cars can be expected to reduce carbon dioxide emissions by about 20 percent, according to a report published last year by the National Resources Defense Council and the Electric Power Research Institute.

"If we're going to solve global warming, we have to clean up the electricity [generation] sector . . ." said Luke Tonachel, vehicles analyst for the council. "Those clean plug-in hybrids only get cleaner as the grid cleans up." If an electrical grid is supplied entirely by coal-fire power plants, he said, plug-ins would provide no reduction in greenhouse gases relative to a regular hybrid.

The new plug-in lithium-ion battery goes in the wheel well, replacing the spare tire, but the original nickel-metal hydride battery remains in the car. Plug access is a donut-sized door in the bumper. The new battery, far more powerful than the original, takes around five or six hours to recharge.

Terry Penny, technology manager for advanced vehicles of The National Renewable Energy Laboratory, a federal lab in Colorado, is using a Prius retrofitted with the A123 Systems-produced battery to test ways to use plug-ins cars. "It turns out that wind energy would be perfect for plug-in cars," Penny said. The wind usually blows more strongly at night, when people could plug in their cars. Currently, one of the challenges of using wind power for utility grids is figuring out how to store the energy collected at times when people are not using as much.

Major car manufacturers, such as , say they plan to start making their own plug-in hybrid electric cars soon. Toyota will road test a fleet of plug-in Priuses in late 2009 or early 2010, said Jana Hartline, the company's environmental communications manager. Those cars will have batteries that allow the car to run completely on electricity for only about 10 miles.

For today's plug-in drivers, the next generation Prius is unlikely to be fuel-efficient enough.

But John Heywood, an MIT professor who specializes in alternative vehicles, said the plug-in Prius drivers are taking a risk by using the A123 Systems technology. "They might screw up their cars," he said. "But there are always people who want to take a stand and want to improve things."

Bina Venkataraman can be reached at bvenkataraman@globe.com.