THIS STORY HAS BEEN FORMATTED FOR EASY PRINTING
ALLSTON

Traffic and shadows voiced as concerns 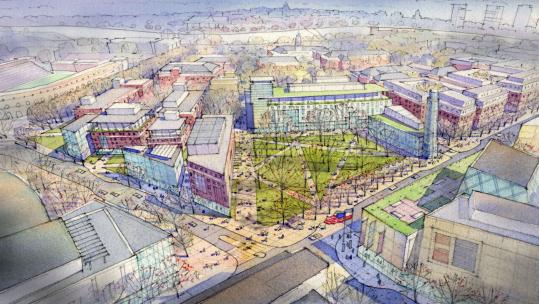 As Harvard's architects last month unveiled the university's revised master plans for what are now acres of concrete, cars, and industrial buildings in North Allston, neighbors grumbled about traffic, shadows, and being totally outgunned.

"Isn't there a process so we aren't coming here every Wednesday night to argue about plans with a bunch of people who are paid a lot more than we are?" asked Tom Lally of Alcott Street. "We need someone to help us understand this."

The plans include contingencies for an underground train or bus tunnel, in case the Urban Ring should need such a spur to Harvard Station, and multiple hubs for alternative energy plants connected to dozens of not-yet-conceived buildings. Slides presented showed tree-lined boulevards with bike lanes, pedestrian paths, apartments, classrooms, offices, stores and restaurants, parks, a farm, and more.

In response to neighborhood requests, the plans include more points for neighbors to access the campus, more public open space, and more connections to the river. For instance, planners added a park that runs from the back of the branch library at North Harvard Street all the way to Soldiers Field Road at the eastern end of Western Avenue.

On the other hand, planners rejected residents' suggestion to depress Soldiers Field, arguing that drivers would be deprived of spectacular river views of the Cambridge side of Harvard's campus.

For their part, neighbors rejected Harvard planners' proposal to add at-grade pedestrian crossings of Soldiers Field Road as unsafe and likely to divert traffic back onto residential streets.

"This highway works really well now," said Tim McHale. "Why would you ruin that?"

The Boston Redevelopment Authority's all-volunteer Harvard Allston Task Force was skeptical about the plan's details, many of which remain sketchy - no sequence of buildings has been proposed, no actual projects laid out besides the Allston Science Complex, which is under construction. The details will come after Harvard weighs opinions from the neighborhood, said Kathy Spiegelman, chief planner for the Allston Development Group.

The university put its master plan on ice for more than a year while it worked on plans for the Allston Science Complex, which is being constructed on an 8-acre parcel on Western Avenue. It hopes to have a plan ready in early 2009 for the authority's review, Spiegelman said.

But task force members worry about the enormity of their job.

"This is incomplete right now, and there's pressure on our discussions that Harvard will want to wrap this up in the next few weeks," member Harry Mattison said in a later interview.

A particular issue for task force members was how the university's plans lined up with an ongoing Community Wide Planning process. Residents have been meeting with city planners for months to outline what they want or need in the surrounding neighborhood - from better train connections downtown to a more vibrant retail area at Barry's Corner, at North Harvard Street and Western Avenue.

Another concern is Harvard's proposal to add streets. Two proposed streets, named Stadium Way and Cattle Drive, would run roughly north-south in Harvard's maps of the new campus from four-lane Cambridge Street, where the Turnpike disgorges traffic, to Western Avenue and North Harvard Street near the stadium.

"We had conversations a year or so ago, where everyone rejected Stadium Way as too intrusive. Has Harvard rejected our rejection?" asked Ed Studdert of Hopedale Street.

Spiegelman said that Stadium Way was envisioned as a conduit for Harvard-bound traffic and deliveries.

Without it and connecting Cattle Drive, she said, cars and trucks would have to use residential streets to access the campus.

Paul Alford of Windom and Joyce Radnor of Hopedale Street worried that tall housing proposed in back of their homes would overshadow them. They also were concerned about who might be housed there - tenants or owners, transient graduate students or more long-term staff and faculty. None of that is fixed, but Spiegelman took note of residents' preference for longer-term neighbors.

How Harvard might enhance Barry's Corner was also a hot topic, including whether the massive buildings shown in the plan might overwhelm the neighborhood feel, and what kind of retail or museum might best serve neighbors as well as students.

Harvard's plan architect, Adam Gross, admitted to neighbors that a café and daycare in every building would mean that Harvard employees and students would rarely frequent Barry's Corner businesses or walk outside. He said that planners would revisit that idea.

Mattison suggested that Harvard's presentation was difficult for neighbors to digest.

"I'd like to see the information organized as 'how we are going to make your life better,' " he said. "Right now we can't say 'Wow, I can't wait to go there.' "

The presentation, including maps and sketches, can be viewed online at http.allston.harvard.edu. The authority is taking community comments; e-mail them to Gerald.Autler.bra@cityofboston.gov.