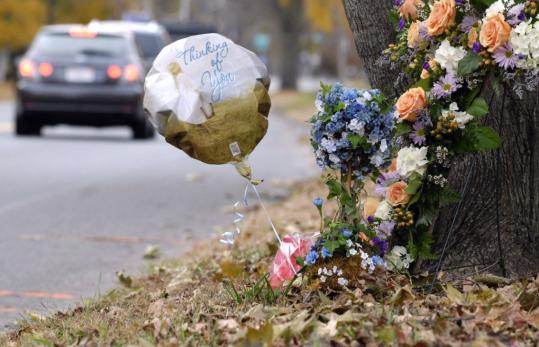 A cross with flowers and a balloon that says ''Thinking of You'' were placed against a tree near where Roberta A. Salois and her son Steven X. Smith-Salois, 9, were killed in Westfield. (NANCY PALMIERI FOR THE BOSTON GLOBE)
By John M Guilfoil Globe Correspondent / November 2, 2008
Text size – +

WESTFIELD - School administrators choked back tears yesterday as they spoke about the boy with the biggest smile and the widest "hello" wave, and his single mother, who worked hard but found time to attend school functions and stay on top of her son's homework.

Halloween candy littered the sidewalk yesterday at South Maple Street and Maplewood Avenue, where Westfield police said Roberta A. Salois, 47, and her son, Steven X. Smith-Salois, 9, were hit by a car and killed about 8:15 Friday night as they crossed the road while out trick-or-treating. Salois was pronounced dead after being taken to Noble Hospital in Westfield.

Her son was pronounced dead at Baystate Medical Center in Springfield.

Police said no charges have been filed against Anne R. Schlichtig, 26, of Westfield, the driver that struck the mother and son.

Neighbor Marie Marx said her 11-year-old daughter was trick-or-treating with Salois's sister and her daughter when they saw the accident scene. "They had no idea what they had come upon," Marx said by telephone yesterday from her home less than a block from the accident site. "By the time they got there, the victims were already gone by ambulance."

Marx said her daughter saw "candy all over the road and the little boy's shoes in the street."

The boy was dressed in a Batman costume, Marx said.

"I must say it's a very busy street," she said. "People were driving very fast. . . . What should have been a very fun night turned into a tragedy for everyone."

School administrators described Steven as an outgoing, popular student whose mother was at his school hours before the accident to visit her son during the school's fall festival.

"Steven was a wonderful, wonderful, wonderful boy," said Christopher Manfredi, vice principal of Juniper Park Elementary School, where the boy was a fourth-grader. "He was always saying hello with a smile on his face. There wasn't a day that went by where Steven wouldn't say 'Hi' to me in my office."

Salois had recently donated a cache of school supplies, such as pencils, erasers, and highlighters, to the school store, something she did every year. "I approached her to thank her yesterday," Manfredi said. "She was always just a giving person. She was a very kind-hearted person."

Her world revolved around her son, said Jim Kane, the school principal.

"There was so much in life she probably sacrificed just to make sure Steven had what he needed," he said. "She did everything for him, and I don't mean like spoiling him, just supporting him."

Kane said that Salois took pride in making sure her son's schoolwork was done on time and that he was always properly dressed for school, with neatly combed hair.

The school department's crisis team met yesterday and will meet again today to discuss how to respond to the loss. Each grade level will be addressed individually, Kane said.

"This is a kid that, if you yourself had a bad day, if you felt down about something, Steven could recognize when someone else was having a bad day, and he would walk up to you with a big wave and make sure you're OK," Kane said. "Everyone, kindergarteners through fifth-graders, everybody knew Steven."

Across town, the family of Roberta Salois, who had five siblings, mourned in private.

"The whole family is going to get together and meet and plan things out from here," Roberta's sister-in-law Pam Salois said, speaking briefly outside her home on Russellville Road.

The family was in no condition to talk yesterday, she said.

Salois's brother Richard Salois said his sister worked in accounting and was the second youngest of six. He said Steven was a "good kid."

"They're wonderful people, and they were taken too early," he said.

A makeshift memorial marked the site of the accident yesterday with a balloon, bouquets of flowers, and a floral arrangement in the shape of a cross.

Mary Phillips, 80, who lives across the street from the accident, said she came running out when she heard commotion.

"We all ran out of the houses and saw that two people were hurt," she said. "I saw candy thrown all over the road; the little shoe was laying in the middle of the road."

She said she has lived in the neighborhood more than 35 years.

"You know, this street is a real bad street. People go very fast, and they should do something about it," she said. "There have been so many accidents. They should put a red light here."

No one answered the door at Schlichtig's home yesterday. A woman who answered the phone said the family had no comment.

This accident was the second in which a Salois family member was struck by a car in as many decades.

According The Springfield Republican, in 1994, Reigh E. Salois, Jr., Roberta Salois's nephew, was 16 when he was hit by a drunk driver while walking with friends from a YMCA haunted house in Westfield. He was dragged 100 feet down Court Street, less than a mile from where his aunt and cousin were hit Friday.

He was left a quadriplegic and died in 2005 at age 27, The Republican reported.

Kathy McCabe of the Globe staff and Globe Correspondent Jillian Jorgensen contributed to this report. John Guilfoil can be reached at jguilfoil@globe.com.