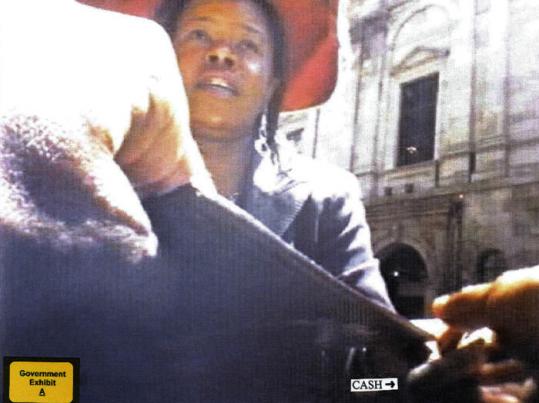 JUNE 5, 2007 | $500 Senator Dianne Wilkerson allegedly accepted cash at Scollay Square on Beacon Hill after telling the developer of the club Dejavu that he would receive a liquor license. (FBI SURVEILLANCE PHOTOS)
By Michael Levenson and Jonathan Saltzman Globe Staff / October 29, 2008

She had raised herself up from poverty, burst onto the scene as a crusading attorney for the NAACP, and championed good-government causes as a liberal legislative powerhouse. But 15 years after starting her career with the promise of a new kind of political leadership, state Senator Dianne Wilkerson was arrested yesterday and charged with a decidedly old-school form of corruption.

Wilkerson, the lone African-American in the state Senate, was taken into custody at her Roxbury home yesterday morning by federal agents and charged with accepting eight bribes totaling $23,500 to secure a liquor license that can sell for $300,000 on the open market and legislation to pave the way for a towering Roxbury development.

She was released after a brief appearance in US District Court late in the afternoon, disappearing in a hulking black sport utility vehicle without responding to questions.

Left behind, though, were indelible images of Wilkerson allegedly accepting cash envelopes and vowing to work with "laser-focused" energy to manipulate powerful figures and the state's political process. A 32-page FBI affidavit laid out in painful detail allegations that Wilkerson took bribes, beginning with $500 over lunch at a Beacon Hill pub packed with political figures to $10,000 secreted inside a leather day planner at a take-out restaurant in her district some 16 months later.

The document reads like a dime-store political thriller: A meeting at posh No. 9 Park, where Wilkerson allegedly tucked 10 $100 bills into her bra; a two-day gambling spree at Foxwoods casino after allegedly accepting a $1,000 kickback at the Fill-A-Buster, a jam-packed shoebox cafe across the street from the State House.

At one point, she allegedly laughed after an undercover agent posing as a developer handed her $10,000 and said, "That's a lot of money." She boasted that she was "arm-twisting" and "knee-cracking" city and state officials.

"I pushed this envelope farther than it's ever been pushed before," Wilkerson, a Democrat, allegedly said in a recorded telephone call with an FBI agent posing as a real-estate developer.

The alleged bribes, recorded by a witness cooperating with the FBI and undercover agents posing as businessmen, carry potential penalties of up to 40 years in prison and $250,000 in fines and seem likely to deal a death blow to Wilkerson's political career.

But they also opened a window on an ugly side of city and state politics, one in which leaders such as Senate President Therese Murray, Mayor Thomas M. Menino, and the chairman of the state-appointed Boston Licensing Board, Daniel F. Pokaski, seemed willing to engage in back-room dealing. According to the affidavit, Wilkerson described the public process for issuing liquor licenses in Boston as merely "smoke and mirrors."

"The latest charges brought against Senator Wilkerson rise to a whole new level and significantly tarnish the reputation not only of the Massachusetts Senate, but government as a whole," Senate minority leader Richard R. Tisei said in a statement.

Wilkerson, 53, was arrested just days before she was hoping to save her Senate seat by winning a write-in campaign against Sonia Chang-Díaz, who had defeated her in the Democratic primary in September. But the campaign appeared to have come to a halt yesterday. Her Roxbury campaign office was closed.

Wilkerson spent the day in the custody of federal officials, then was escorted by marshals into a packed US District Court in Boston shortly after 3 p.m.

The courtroom fell silent as Wilkerson strode in and seated herself before Judge Magistrate Timothy Hillman.

She watched stoically as prosecutors said that Wilkerson had $6,000 in cash on her when she was taken into custody and that federal prosecutors will be scouring all of her financial records with an eye toward possible tax evasion prosecution.

Twenty-five minutes later, Hillman released the senator, setting the next court appearance for Nov. 17 and ordering her to avoid contact with witnesses in the case and to post a $50,000 unsecured bond. Wilkerson left through a rear door with a small entourage led by her son, Cornell Mills, pushing cameras away as they walked. They climbed into a black Lincoln Navigator with New York plates and sped off.

"As every defendant, Senator Dianne Wilkerson is entitled to the presumption of innocence," her lawyer, Max D. Stern, said. "There is a context to every one of the interactions you have been told about. There is something that happens before. There is something that happens after that has not been included in what you've been shown. You will learn that when there is a trial."

Wilkerson's arrest sent shock waves through the State House and City Hall and through her district, where she has long been a beloved, if controversial, figure. She had been reelected time and again, despite a 1997 guilty plea for failure to file tax returns, a 1998 probation violation that sent her to a halfway house for 30 days, and a 1998 finding that she had violated campaign finance laws dating back to her first Senate contest in 1992.

Republicans called on her to resign, while Democrats, including Governor Deval Patrick, who had backed her in the September primary, were more cautious.

"Initial reports are both troubling and sad," Patrick said in a statement.

"I am extremely disappointed," said Murray, who stripped Wilkerson of her chairmanship of the Committee on State Administration and Regulatory Oversight and said she would ask the Senate Ethics Committee to investigate.

The FBI launched its case in early 2007, when someone approached agents and said that Wilkerson "routinely took cash payments from constituents and others with business before the Senate." The person had gone to Wilkerson for help opening a club in December 2006, according to the affidavit. The FBI enlisted the person as a confidential informant and asked the informant to bribe Wilkerson with $500 for help getting a liquor license for the club, called Dejavu.

The identity of the witness who cooperated with the FBI was not clear. Records show that the company that wanted to open Dejavu, Back Bay Entertainment Inc., had two principals, Ivan Serret and Marcos Guererro Jr.

Serret said he never paid cash to anyone and was not the cooperating witness. Guererro could not be reached. A man at Guererro's Revere address who identified himself as Guererro's father said his son had dropped out of the project and moved to the Dominican Republic. A third man involved, Ron Wilborn, said he was not the witness.

Wilkerson is accused of taking the bribe in June 2007 and days later wrote on her Senate stationery to the mayor and the Boston Licensing Board that she was seeking to "secure a license for Dejavu immediately." She wrote to all Boston councilors complaining about the lack of liquor licenses in her district and saying it was an issue of discrimination.

She ultimately held up pay raises for the Boston Licensing Board and held up legislation at the State House designed to save Boston $500,000. All along, she was taking bribes, the FBI said.

Ultimately, FBI agents would pose as out-of-state businessmen interested in developing a parcel of state-owned land in Roxbury that Wilkerson was pushing to have redeveloped. They met with her, often in her State House office, to discuss the deal, then offered her bribes after asking to leave the building to "grab a cup of coffee."

On one occasion, at the Fill-A-Buster, an agent slid her a "white envelope containing $2,000 in cash," according to the affidavit.

"Oh, thank you, " the affidavit alleges she said.

In June 2008, the undercover agent gave her bribes of $3,000 and $2,000 for agreeing to craft legislation that would circumvent the public bidding process, according to an affidavit. Later, this month, when she delivered the bill, she was to get the $10,000 bribe.

She had expressed great gratitude for the payoffs, investigators said.

"Believe me, they're very, very, very much appreciated," she said, according to the FBI.