Why row past 70? Because they're here

For senior scullers, racing on Charles is its own reward 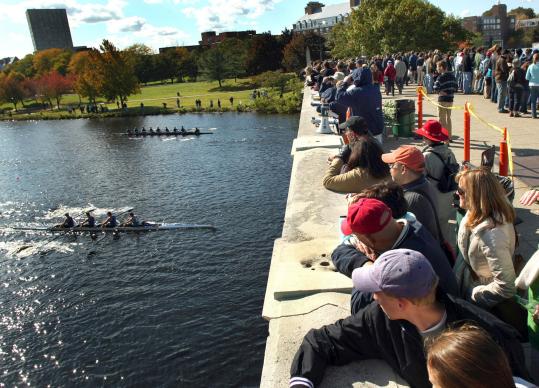 Spectators watched scullers pass under the Weeks footbridge yesterday during the the 44th Head of the Charles Regatta. ''I would hate to depart from this world,'' said rower Nicholas Daniloff, 73, ''without having taken part of that show, at least once.'' (John Tlumacki/Globe Staff)
By Benjamin Paulin Globe Correspondent / October 19, 2008
Text size – +

One cup of coffee.

That is all 73-year-old Nicholas Daniloff will have for breakfast before he casts off today in one of the most prestigious and grueling rowing competitions in the country.

The Cambridge native, who has been rowing since he was 15, will be competing for the first time in the Head of the Charles Regatta, and he has plenty of motivation to keep sculling. He does it, he said, "partly to prove that I'm still alive, partly because others of my age are also competing - and some of them I think I can beat."

"I would hate to depart from this world without having taken part of that show, at least once," said Daniloff, a Northeastern University professor famous for having been held by the KGB when he was a journalist in Moscow in 1986.

The competition, which draws scullers from all over the world, will feature 108 rowers over the age of 60, said Jim Connelly, a spokesman for the Regatta, which is in its 44th iteration.

"The reason you see a lot of older people rowing is because it's a great sport for the all-around total-body exercise," Connelly said. "If you come down to any of the boat clubs, you'll see them out on the river at 5 a.m. It's amazing. They're very, very dedicated."

Count Francis de Marneffe, of Westwood, among the dedicated. At 84, he is the oldest rower in the pack and will be competing for the fifteenth time in the Regatta.

As the years have gone by, de Marneffe said, his desire to row has never waned, though his strength and race times have slowly diminished.

"To me finishing is the important part," said de Marneffe. "I am very slow. I'm sure I'll be last in my race."

In recent years, he said, he has had to row hard to stay ahead of the leaders in the women's competition, which starts directly after his race, the Senior-Veterans Singles Men's race.

"I'm not looking to beat anybody," he said. But he does want to finish no more than 10 minutes after the winner in his race. Otherwise, race officials could mark his result as "Did Not Finish" - a rule de Marneffe abhors.

"There is a difference between someone who did not make it to the finish and someone who is just slow," he said.

There is one advantage to being the oldest sculler: a rule that gives septuagenarian rowers a 12-second handicap for each year of their age past 70.

Not all of the competitors are lifelong rowers. Peter Spellman, 79, of West Newbury, said he began rowing when he was well into his sixties, to stay in shape.

"I noticed at age 65 I was getting weaker. I like to row because it has low impact on the knees, ankles and hips," Spellman said.

"I can't run anymore," he continued. "So many parts of my body jiggle and it's disconcerting, but I'm happy with rowing."

Though they can't match up to racers many decades younger than them, the older scullers say they derive satisfaction just by being on the water.

"My physical equipment is not very great, so you do the best that you can with what you've got."