Text endorsed by Washington to be auctioned 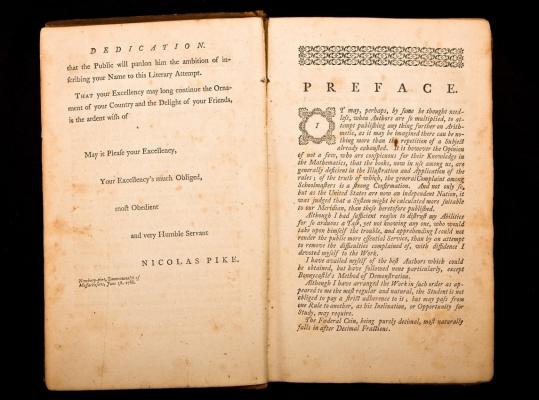 The preface page of Nicholas Pike's ''A New and Complete System of Arithmetic?'' is shown in this image. Pike, a Newburyport school teacher, published the book in the late 1780s. (John McInnis Auctioneers)
By Andrew Ryan Globe Staff / October 19, 2008
Text size – +

It can be difficult for young authors to collect blurbs for their books, those pithy testimonials that extol the writing, depth, or significance of a new work.

So in the late 1780s, to whom would Nicholas Pike, a Newburyport school teacher, turn to vouch for his yet-to-be-published text, "A New and Complete System of Arithmetic?" How about the best known name in the newly independent nation: General George Washington.

After examining Pike's work in Mount Vernon in 1788, Washington wrote a gushing letter that would have made any author blush.

"The handsome manner in which that work is printed, and the elegant manner in which it is bound, are pleasing proofs of the progress which the arts are making in this country," Washington wrote in the three-page letter. "But I should do violence to my own feelings if I suppress an acknowledgement of the belief that the work itself is calculated to be equally useful and honorable to the United States."

Washington's handwritten letter and an early copy of Pike's book are expected to fetch $40,000 to $60,000 at a sale today at John McInnis Auctioneers in Amesbury.

"It's pretty incredible, the condition," McInnis said of the items, which have been stored by Pike's descendants in a safe deposit box. "The book is wonderful. The writing is just perfect. The drawings, amazing. I'm telling you, it looks like it was done by a computer."

Bound in animal hide, the 1786 copy of the book has brittle, ivory colored pages that include Pike's handwritten corrections before the first printing in 1788. The text became an important work that was in wide use of 30 to 40 years.

"It's a remarkable book, a long elaborate overview of arithmetic and mathematics," said Peter Drummey, the librarian at the Massachusetts Historical Society. "Then in this particular New England way it has instructions how to calculate interest and how to calculate probability for an insurance policy. It is that kind of early American idea that you can teach yourself out of a book."

Pike was the son of a minister born in Somersworth, N.H. in 1743. (Records show that his first name was spelled "Nicholas" and "Nicolas," without an H). A 1766 graduate of Harvard University, he taught school in Maine and eventually for more than 20 years in Newburyport.

Other Pike items in today's auction include his personal journal with drawings, notes, and calculations for mathematics, navigation, and astronomy. There is also a meticulously detailed watercolor of a Pike family tree, and an original poster printed to advertise the publication of "A New and Complete System of Arithmetic."

"I think that his book is part of the wide-ranging interest and enthusiasm for education and improvement in the new nation," Drummey said later in an e-mail. That enthusiasm is underscored by Washington's glowing letter.

"As a surveyor, he's somebody who could probably tell you a thing or two about arithmetic and mathematics," Drummey said. "Besides he's the big name that you want for your book."