THIS STORY HAS BEEN FORMATTED FOR EASY PRINTING
Region

Library use rises as economy falls 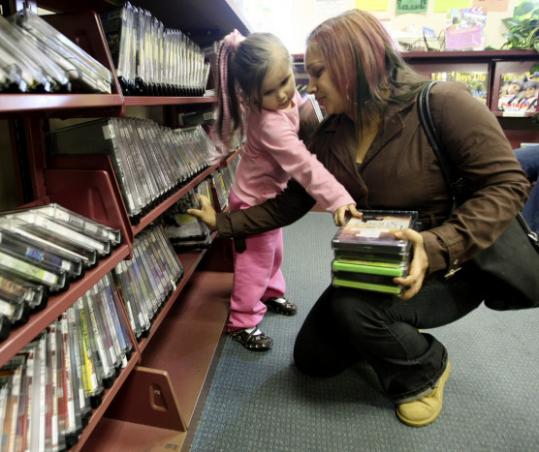 Haverhill assistant library director Susan Katzenstein said the city's public library is usually "an incredibly busy place." But nowadays, "our usage is through the roof."

The Haverhill library is not alone. Across the region, local public libraries are reporting a surge in use, a trend officials tie directly to the economic hardship many are facing.

"As the economy takes a turn downward, more people are rediscovering their local public libraries and the services and resources they offer," said Kendra Amaral, chief of staff to Amesbury Mayor Thatcher W. Kezer III.

According to Amaral, library circulation in Amesbury was up 19 percent this past July compared with July 2007. Haverhill's July circulation was 15 percent higher than the previous July, according to Katzenstein.

Among the 28 member libraries in the North of Boston Library Exchange, combined circulation in July and August was up 4.8 percent over the same months last year, according to NOBLE executive director Ronald Gagnon. The 28 members include 17 local public libraries.

"People don't have as much disposable income, so the library provides an easier resource for books," he said, noting other materials, such as DVDs and CDs, that libraries offer. "It just flies in the face of people who say, 'Who needs libraries anymore?' "

At the Revere public library, circulation in fiscal 2008, which ended June 30, was up 20 percent over the previous year, according to library director Robert E. Rice Jr. He said usage has risen noticeably since then.

"Book prices are $25, $30 for hard covers nowadays, and people just can't afford it," he said. "So it's not that the library ever went anywhere, but people are rediscovering the services provided."

Beverly library director Pat Cirone said the city's library circulation in July was up 16 percent over July 2007, and rose 8.3 percent in fiscal 2008 over the previous year.

Cirone said a staff member reported to her that on a recent Saturday, "they had three check-out stations going and lines on every one of them for hours on end. She's been here over 10 years and she said she has never experienced that kind of demand."

Not only are people opting to borrow books rather than buy them, "they are checking out DVDs, saying they can't afford to go to a video store or to use anymore," Cirone said.

Georgetown library director Ruth Eifert said her library's circulation in both July and August was at the highest levels for those months in at least six years.

While the completion of the library's expansion and renovation last fall is a draw, Eifert said the economy is another. As evidence, she said she has noticed more people willing to wait for a best-selling book - even if it takes a few weeks - as an alternative to purchasing it. She said the library's magazines are also in "constant use," suggesting many are getting rid of their subscriptions to cut costs.

The high demand for use of their computers is another indicator of the boom in library use, officials say.

Rice said Revere maintains 32 computers for public use and they are "jammed constantly. . . . Often, especially in the afternoon, there are lines of people waiting for them."

Computer users include students after school, seniors e-mailing family and friends, and - in another sign of the times - adults conducting job searches, Rice said.

"A lot of places nowadays you can only apply on line" for a job, said Cirone, who also sees job seekers at her terminals. "That's tough for someone who can't afford the Internet or might not have a computer."

Cirone said she also has patrons who regularly use the library's computer to check their e-mail because they have given up their own Internet accounts to save money.

In Everett, the city's library circulation was up 36 percent in July compared with July of last year, while computer use was up 23 percent, according to library director Deborah Abraham. She said the pickup in demand became evident when gas prices started spiraling.

"I just think people really felt the pinch when that happened," she said. With all the money they were spending on gas, "they were looking for other things to cut back on," seeing the library as an alternative to going to the movies or purchasing books.

"For us, it's always good to see new people," said Salem library director Lorraine Jackson, whose library's combined circulation in July and August was 8 percent higher than during the same months last year. "The more people in the community that are aware of the library, the better the library and the better the community."

At the same time, some librarians express concerns about their ability to accommodate growing numbers of patrons as their own budgets become tighter.

"We hope people realize that in tough times, it's important to keep the library service going so people have a place to come," Abraham said.