Of Red Hats and Red Sox

Cardinal O'Malley is no Fenway regular. But he keeps tabs on Boston's secular faith - baseball. 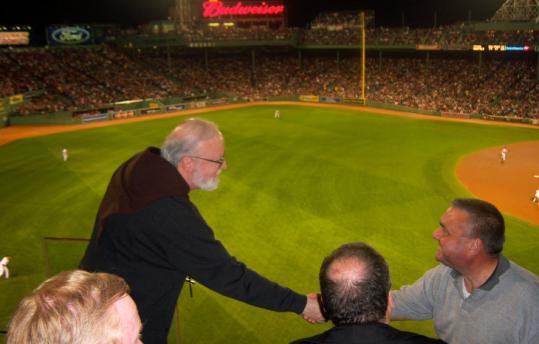 Cardinal William H. O'Connell was never much of a Red Sox fan. Despite presiding over the Archdiocese of Boston during a period when the team won the World Series four times, there's no evidence that he used his free pass to Fenway, and he railed against the playing of baseball on Sundays.

His successor, Cardinal Richard J. Cushing, was more of an enthusiast, periodically buying blocks of seats at Fenway and bringing hundreds of nuns, in full habit, to games.

Cardinal Humberto S. Medeiros was a real fan, so much so that, on his way into a papal conclave in Rome, he famously asked how the Red Sox were doing. (That was in 1978, a grim year for the Vatican, when two popes died, and for the Red Sox, who lost the American League East division in a one-game playoff with the New York Yankees.)

Now comes Cardinal Sean P. O'Malley, a Capuchin Franciscan friar better known for his affection for foreign films, Spanish literature, and "A Prairie Home Companion," but who showed up at Fenway Park with a group of priests and church officials to watch the Red Sox clinch a wild card berth on Sept. 23.

"Since I have been the archbishop of Boston, the team has won two championships," O'Malley blogged afterward. "Only one other archbishop in the history of the diocese can make that claim. Cardinal O'Connell saw the victories of 1912, 1915, 1916, and 1918 . . . but, I have just gotten started!"

O'Malley's embrace of the Red Sox has echoes across the nation, as clergy of many stripes endorse, bless, or express support for a variety of sporting events. Some of the gestures are sincere expressions of fandom, others are an effort by clerical leaders to demonstrate their humanity, and others are forms of evangelism with a history that dates back to the mid-19th-century phenomenon of "muscular Christianity," in which ministers embraced sports as a way of trying to draw more men into the pews.

Bishop Thomas J. Tobin, the Catholic bishop of Providence, is probably the best-known example of a bishop/fan. The Pittsburgh native is passionate about the Steelers, and, despite living in a region enamored of the New England Patriots, he hangs a Steelers banner from the railing of the bishop's residence and has a room that many refer to as a Steelers shrine in the house. Although Tobin's passion for the team is real, he said it also has pastoral benefits; his well-known love of the sports team makes it easier for many people, from parishioners to politicians, to start a conversation with him.

"We deal with so many heavy issues, and complicated issues, and sometimes very difficult and emotional issues, and it's really good to have a lighter side and to have people be able to relate to that," Tobin said. "It makes the office of the bishop, and the bishop himself, more approachable, and the discussion about sports and the banter is really an excellent icebreaker."

Cardinal O'Connell, a Lowell native who served as archbishop of Boston from 1907 until his death in 1944, was not much of a fan. His biographer, James M. O'Toole, a Boston College history professor, said that although O'Connell was offered free passes by the owners of both the Red Sox and the Braves, and responded with notes of encouragement, "I never saw any evidence of his attending a baseball game."

"Like most other religious leaders in town, he opposed Sunday baseball in the 1920s," O'Toole said. "They considered this a form of Sabbath-breaking, and O'Connell in particular thought 'the noise made in rooting' disrupted the quiet of Sunday."

Now, six decades after O'Connell's death, the Red Sox are again on a bit of a winning streak - having won the World Series twice in the last four years and now in the midst of an American League Championship Series against the Tampa Bay Rays (who formerly had the word Devil in their name, but whatever). Cardinal O'Malley, is not known to be such a committed sports fan himself, but he has periodically watched the Super Bowl with his fellow Capuchin friars in Boston, and his attendance at the Sept. 23 Red Sox-Indians game was only the latest public expression of solidarity with the Olde Towne Team.

In 2003, shortly after his installation in Boston, O'Malley offered public advice to the Red Sox, saying, "They just need to stay focused now, keep cool," and he told reporters, "the first request I received from a Boston priest was that the new archbishop make sure that the Red Sox would win this year, so I'm working on it."

In 2006, when he went to Rome to receive the red hat that signaled his elevation to cardinal, he pulled up his cassock at a news conference to show reporters his cardinalatial red socks and said, "At least nobody can doubt my sports affiliation now, with the Red Sox."

And in April, as he prepared to attend a papal Mass at Yankee Stadium, he told reporters, "I'll be wearing my red socks, and if I get a chance I'll bury them in the outfield." The cardinal was, of course, referring to an incident in which a construction worker buried a Red Sox jersey in the clubhouse concrete at the new stadium in a supposed effort to bring bad luck to the Yankees.

"Most religious leaders will probably say to you categorically that God has more important things to do than worry about who wins or loses a sporting event," said Christopher H. Evans, a professor at Colgate Rochester Crozer Divinity School and coauthor of "The Faith of Fifty Million: Baseball, Religion and American Culture."

"But religious leaders, like everyone else, are fans, and obviously there are all kinds of examples of how religion is used in some way to provide a sense of blessing, particularly in NASCAR events, but you also have that dimension that when a bishop or a cardinal shows up for a game, it can take on new meaning, as if somehow the event is being sanctified or blessed," Evans said.

O'Malley's spokesman, Terrence C. Donilon, described the cardinal's relationship to the team this way: "The cardinal enjoys sports, but because of his many responsibilities and commitments, he does not get a chance to attend many games or watch them on TV. It is unlikely that the cardinal will be able to watch an entire game during the postseason, but I expect that he will keep track of how the Red Sox are doing as they move through the playoffs."

As for the cardinal's repeated mentions of the Red Sox, Donilon said, "let's just say the cardinal has a good sense of humor, and timing, and keeps track of how Boston's sports teams are doing against teams in other cities."

The Red Sox have cultivated a clerical presence in the stands. For years, the team has had a clergy pass program allowing up to 100 men and women of the cloth (of any denomination) to half-price standing room tickets for regular-season games, according to Susan Goodenow, a team spokeswoman.

"The Yawkey regime had a connection to the Catholic Church, and that's where it started, but now it's a gesture on behalf of our ownership group to this segment of our population who give so much to others," said Sam Kennedy, the chief sales and marketing officer for the Red Sox. Kennedy has personal experience with the program - his father, the Rev. Thomas B. Kennedy, is a local Episcopal priest who worked at Trinity Church and St. Paul's Cathedral and who brought young Sam to games.

"A lot of people's prayers were answered in 2004, and hopefully we'll keep it going over the next couple of weeks," Sam Kennedy said.

Michael Paulson blogs about religion at boston.com/religion and can be reached at mpaulson@globe.com.