THIS STORY HAS BEEN FORMATTED FOR EASY PRINTING
Matters of Faith 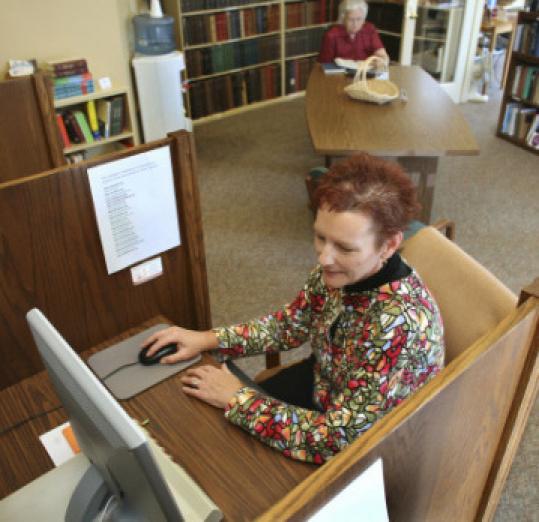 Matters of Faith is a series of occasional articles examining religious life in area communities.

NATICK - The Christian Science Reading Room has been part of daily life in Natick Center for nearly a quarter-century.

Through the large, sunny storefront windows, volunteer librarian Linda Herring gazes upon commuters ducking into Bakery on the Common for coffee, little girls in pink leotards dashing to ballet lessons at the Nancy Kelley Dance Studios, and the bustling Saturday morning farmers market on the town green.

But few passersby notice her. Christian Science Reading Rooms are so common in town centers around the world - Massachusetts alone has more than 50 of them - they just blend into the scenery.

But every so often, someone stops and regards the carefully arranged display of Bible passages and quotes from the church's founder, Mary Baker Eddy. Only if someone loiters for an especially long time, looking particularly lost, sad, or curious, will Herring poke her head out the door to offer help. Otherwise she waits for people to step inside of their own accord to learn about her faith.

"I don't want to be pushy," said Herring, an Ashland resident who is a lifelong Christian Scientist and a member of its Natick church. "We consider this the public face of our church, but we generally wait for people to come to us."

Churches try to situate their reading rooms in village centers, near public transportation, as an educational and public outreach tool. Skyrocketing rents made it prohibitive to keep the longtime Central Street location of Wellesley's reading room, so it was relocated in the church building off Linden Street, said member Paul Collins. But downtown locations in Framingham, Weston, Marlborough, and Needham continue to thrive, said members of those communities.

Newton's members recently moved their reading room from its longtime Newtonville storefront to their church's new home in Newton Highlands.

The Natick reading room gets anywhere from two to a dozen visitors each day, said Herring. Many want a quiet place to read the Bible or Eddy's most famous work, "Science and Health." A few are in a spiritual crisis, having fallen away from another religion and desperately searching for a renewed relationship with God, she said.

"That is the most rewarding part, when you make a connection. A woman came in very depressed very recently, very upset," said Herring, who, in these cases, tries to be a calming, friendly presence. "I told her that God is listening to each of us, and that God loved her."

Herring said she is in no way a minister - Christian Science is a faith that has no such formal hierarchy or administrative leadership. Congregants take turns being readers of scripture at Wednesday night services and teaching at Sunday school, and churches and reading rooms are run locally.

Many people have heard of the church's well-respected newspaper, The Christian Science Monitor, but few really understand the faith, which adherents say is based on the teachings of Jesus Christ and includes a reliance on spiritually based healthcare. Members are not forbidden to receive treatment from doctors, but most choose prayer instead of conventional medicine, and often seek exemptions from mandatory health exams and immunizations, a practice that can be controversial when children are involved.

Local congregations tend to be small, about 75 people in most of the churches in area communities. The church does not release formal numbers of worldwide followers, though it is active in 60 countries, with one of the world's most vibrant centers being the "Mother Church" or First Church of Christ, Scientist in Boston, with its landmark reflecting pool and Mapparium.

Aside from a snarky reference in "The Simpsons" a few years ago, when an episode of the animated TV show cited a reading room in Homer's fictional hometown, or the sight of the Longyear Museum on Route 9 in Chestnut Hill, the public doesn't hear much about the faith except from members themselves.

So that leaves a lot of one-on-one outreach to do, said another longtime Natick church member, Linda Zanoni.

"No, we aren't Scientology and Tom Cruise is in no way involved," she said. "Most people, after they talk to us, are very respectful and interested.

"People say, 'I heard you don't like doctors' and that's about all they know." However, Eddy's principles of healing through prayer, and aligning oneself with God, are more complicated than that, Zanoni said. "And absolutely nobody is thrown out of church if they get vaccinations or a physical." Clearing up the misconceptions and fear are the point of the reading rooms.

The Weston Center reading room has had its doors open almost daily for 53 years, said volunteer Mimi Hastings. She said she came to Christian Science as a young woman 50 years ago, devastated by a series of miscarriages. Prayer was a solace, she said, and she eventually bore three children and is a proud grandmother to five.

These days, at age 80, she often finds herself chatting with workmen, many recent immigrants, who wander into the reading room on lunch break.

"Sometimes they come in covered in paint from their jobs. Sometimes they want to read the Bible, or just talk about the Bible," said Hastings. "I love it. I feel that we have to be humble and be our brother's keeper."