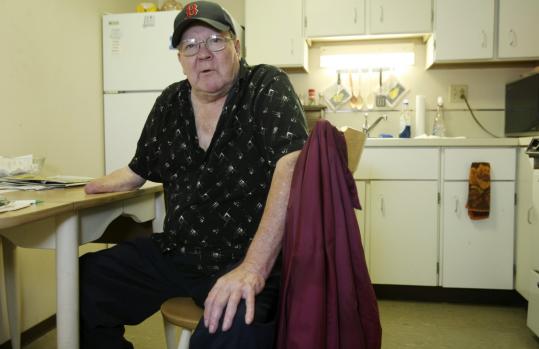 These days, Stephen Sanick is doing all he can to shield himself from the economic turmoil that is devastating so many of his friends and neighbors. The retired quality control manager bought private health insurance to help offset the cost of his expensive prescription medications and switched auto insurance carriers - moves that will save him about $4,000 annually.

But with the cost of food and fuel soaring, he's also been forced to make some sacrifices. The 69-year-old widower has eliminated all out-of-town travel. Gone are the days when he scoured York Harbor for Maine's finest lobster and bay scallops. These days, the Lowell resident's excursions are confined to the city's markets and downtown shops, often to look for bargains.

"When I retired nine years ago, things weren't too bad," said Sanick, who lost a hand in an industrial accident years ago and two toes to diabetes last November. "Now, I have to watch my pennies. The gasoline prices are knocking the daylights out of me, and my money isn't going as far as it used to at the grocery store. What used to cost me $12 or $13 now costs me $20."

As they field calls from elders anxious about the economy, advocates for the poor fear many of the region's most vulnerable seniors will face even tougher decisions in the coming months. Buy needed medications, or pay the heating bill? Patch the leaky roof, or pay the mortgage?

Local social service agencies say thousands of seniors are living in fear, worried about how they'll make ends meet on scant pensions and Social Se curity checks during the cold weather months ahead.

"We're getting hundreds of phone calls each month from seniors who need help with medical bills, heating bills, shelter, even clothing," said Rosanne DiStefano, executive director of Elder Services of the Merrimack Valley Inc., a nonprofit agency working to help elders remain in their own homes. The agency serves seniors in 23 communities stretching from Dunstable to Amesbury.

"The people we serve are not living off retirement plans," said DiStefano. "These are people who get by on Social Security and scant savings. Until now, they've managed to keep their heads above water, but as the costs of basic necessities continue to escalate, we're seeing unprecedented levels of fear and anxiety."

Such fears are driving many seniors back into the labor force. Today, more than 6 million workers are 65 or older, according to the Bureau of Labor Statistics. And over the next decade, the number of 55-and-up workers is expected to rise at more than five times the rate of the overall workforce, the federal agency reported.

"Years ago, folks would retire and, six months later, they'd go out and get part-time jobs to have something to do," said Susan Cripps, a counselor with the SHINE (Serving the Health Information Needs of Elders) program, who helps seniors across the Merrimack Valley navigate the complex world of Medicare. "Now, we're seeing a lot of seniors getting jobs to supplement their income. This seems to be especially true for older women who typically stayed home to raise their children and didn't put much into their retirement plans, or didn't have retirement plans at all."

But for elders like Sanick who suffer serious health problems, returning to the 9-to-5 grind is not an option. Instead, they're being forced to delay home repairs or rethink their lifestyle. Some seniors are clipping coupons or carpooling. Others are finding they must change their eating habits in order to rein in costs at the supermarket.

"A lot of elders rely on frozen dinners and prepared foods, because of the convenience they offer, but with the cost of food going up and up, they're finding they have to do more of their own food preparation," said Martha Cashins, who owns and operates a Home Instead Senior Care franchise that helps 80 elderly clients in more than 30 Essex County communities from Andover to Salisbury maintain a safe and independent lifestyle. "We try to help our clients in any way that we can, from taking them to medical appointments and the movies, to helping them with meal preparation or finding a handyman to make minor home repairs."

In the most desperate cases, frail elders are playing Russian roulette with their health. Barbara Howes, 73, a widow, went without her prescription medications last year in order to keep the heat on in her Haverhill apartment. She ended up in the hospital. This year, in hopes of averting a similar scenario, she's applying for fuel assistance.

Her plight is not uncommon.

The Massachusetts Executive Office of Elder Affairs is currently conducting a survey to determine what services people 60 and older need. Early results from the statewide poll show that 68 percent of respondents are struggling to meet housing expenses, 69 percent are having trouble affording health insurance, and 65 percent are finding it difficult to afford groceries.

To help seniors scrape by, Elder Services holds a "RiverWalk" each year to raise funds for the agency's elder care fund, money that is distributed to seniors in need. This year's 6K walk is scheduled to take place in Lawrence this morning, with festivities set to kick off at 10 a.m.

"Through the elder care account, we try to make a difference," said DiStefano. "It's the only vehicle we have to help people in any discretionary way. Last year, the RiverWalk brought in about $50,000 in donations, but this year, we're not sure we'll be able to raise that much. Everyone is hurting because of the economy."

In a sign of the times, Burlington-based Minuteman Senior Services, in partnership with the Crafty Yankee in Lexington, is soliciting contributions for gift cards to pharmacies and grocery stores instead of trying to outfit needy seniors with new sweaters, and the Friends of the North Andover Senior Center is raising money to help seniors with heating costs. The winter fuel bills are cause for concern for many seniors, who must figure out how to stretch their fixed incomes to cover the cost of heat.

"Many of the seniors living in our region are house rich but cash poor," said Joan Butler, executive director of Minuteman Senior Services, a nonprofit agency that serves more than 16,000 seniors in 16 communities, from Harvard east to Woburn. "They've lived in the same house for 40 or 50 years. It's paid off, but they can't afford the upkeep on the property and meeting the daily cost of living is a challenge."

According to a recent study published by the AARP Public Policy Institute, residents who rely on fuel oil for heat can expect to pay 38 percent more to heat their homes this year over last, while those who rely on natural gas can expect their bills to rise 7 percent. Already, fuel oil is at $3.28 per gallon, more than $1 higher than it was at this time last year.

"It's going to be a horrendous year," said John Condon, heating program director for Community Action Inc. in Haverhill, which negotiates discounted oil prices for hundreds of low-income households in 11 communities. "We've been booking appointments since July for folks who want to apply for fuel assistance for the first time."

Depending on income, households can receive up to $735 in fuel assistance for the winter season, but most low-income families receive about $500 from the federal government, an amount that advocates say is woefully inadequate. The income limit to qualify for assistance is $20,800 for a single person; the limit increases by $7,200 for each additional family member.

"Federal funding is not in touch with reality," said Condon. "Ten years ago, the maximum grant was $595 per family, but that would buy 800 gallons of fuel oil, enough to get through the winter. Today's maximum allotment would only buy about 224 gallons of fuel oil. The politicians in Washington should bail out the fuel assistance program, and worry less about bailing out the big financial institutions."

Sanick counts himself among the lucky. His heat is included in his rent.

"I try not to worry too much," said Sanick. "I've always been cost-conscious, so I'm no stranger to a budget, but unexpected expenses still screw me up a bit. I've got a '94 Buick that needs new brakes, but I can't afford the car repair bill right now. It will have to wait."

If you would like to participate in the 6K RiverWalk today, you can register at the event, which is being held at 360 Merrimack St. in Lawrence. Report to Building 5.

Brenda J. Buote can be reached at bbuote@comcast.net.