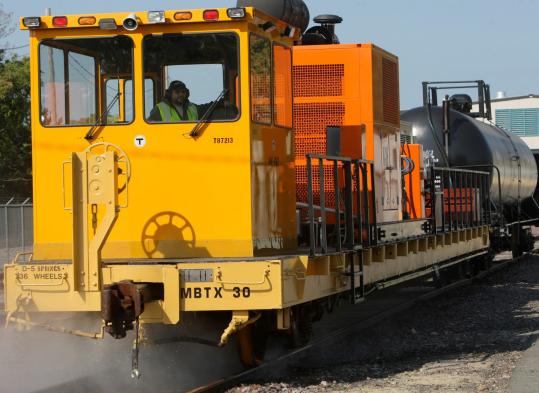 Potentially giant toll increases stole the headlines after last week's Massachusetts Turnpike Authority meeting, but not all the news out of the meeting was so costly to commuters.

The Pike announced that it will launch a pilot program, date unknown, to give out 5,000 free Fast Lane transponders to drivers willing to fill out a survey explaining why they don't already have one.

The plastic Fast Lane boxes normally cost $25.95, after a $5 reduction that was implemented in December.

Why, you ask, would the Turnpike Authority give out free transponders when it's so desperate for cash that it's laying off workers and considering a fat toll increase?

It's all about automation, and toll collectors are one of a few areas where the agency can lower costs. Earlier this month, executive director Alan LeBovidge announced plans to lay off about 100 toll collectors over the next 12 to 18 months. Turnpike spokesman Mac Daniel said it costs, on average, 47 cents to collect a toll manually, versus 14 cents electronically.

The Turnpike now processes 61 percent of its tolls electronically. Managers are trying to push that number higher.

Aside from saving money, the transponders have another potential effect: making drivers forget how high the tolls are climbing. Regular Starts & Stops readers may remember an April item about an MIT economist who found that drivers who pay electronically are far less likely to know what their tolls cost.

A question of timing
As the Turnpike Authority board debated raising tolls last week, the timing of a vote seemed to be at least as significant as the central question.

Board members were not even sure if they would have their regular monthly meeting next month. When pressed by fellow members, Bernard Cohen, chairman of the board and secretary of transportation, said the board would hold an October meeting. But he opposed a motion to move "imminently" on a toll hike.

Here's one reason timing matters. November's general election ballot includes a much-debated initiative to eliminate the state income tax. The bad economy and high energy costs all contribute to the desire by some voters to send a message by eliminating the income tax, said Michael J. Widmer, president of the Massachusetts Taxpayers Foundation and an active voice in favor of keeping the income tax in place and a proponent of raising tolls.

"The portion of the electorate that uses the tolls, obviously this is going to be another kick in the head," said Widmer.

Widmer said he believes a toll hike could be a factor in a close election but does not support putting it off, given the sorry state of the Pike's finances.

Cohen's spokesman said Friday that he was on vacation and not available for comment.

Slippery tracks
It's autumn, do you know where your commuter train is?

Fall leaves are one of the more obscure explanations train operators give for running behind schedule. But this year, they'll have a harder time arguing they couldn't do anything about the problem, thanks to the second of two $900,000 rail-cleaning machines purchased by the MBTA and put into service last week.

It turns out that soggy leaves on the tracks leave a slippery residue that causes train wheels to slip and flatten, requiring lower speed limits and more frequent repairs.

Scott Farmelant, a spokesman for the private company that runs commuter service for the MBTA, said the rail-cleaning machines, blast water at 15,000 pounds per square inch. Massachusetts Bay Commuter Railroad Co. custom built the machine for the MBTA. Their crews will run both machines through the end of the fall during daytime hours only, owing to their loud noise.

Even without slippery tracks, commuter trains have been tardy in recent months. In August, 17.5 percent were at least 5 minutes late. September figures through last Thursday: 14 percent were late. Farmelant blames the delays on heavy track construction.

Pedestrian and cycling advocates are still fuming over plans to remake Massachusetts Avenue in the South End without bike lanes and other features that would encourage better walking, cycling, and public transit access.

Letters have flown back and forth between advocates and the Massachusetts Highway Department over the past month. The activists wonder why the state, which has publicly endorsed accommodating alternates to car travel in road projects, has not put more pressure on the city of Boston to revamp the project and others like it that were planned before the city and state officially began moving toward becoming less car-centric.

"In 2008, I think we need to be thinking really differently about how we do transportation," said Rosalie Anders, co-chair of the Commonwealth of Massachusetts Bicycle & Pedestrian Advisory Board.

The answer from the city and state: It might have been a different design if it were starting today, but any changes would set back the $12.3 million project and jeopardize an 80 percent federal match.

Luisa Paiewonsky, commissioner of Mass Highway, said the city of Boston had been meeting with people, including neighborhood groups: "We're balancing among a lot of competing interests."

Paiewonsky said she planned to hold more face-to-face meetings with the concerned groups. But the bottom line: It does not look like the project will change. The state has begun advertising for construction bids and expects work to begin in the spring.

Please send complaints, comments, or story ideas to starts@globe.com The column and a listing of major road closures and other transportation advisories can be found at www.boston.com/starts.