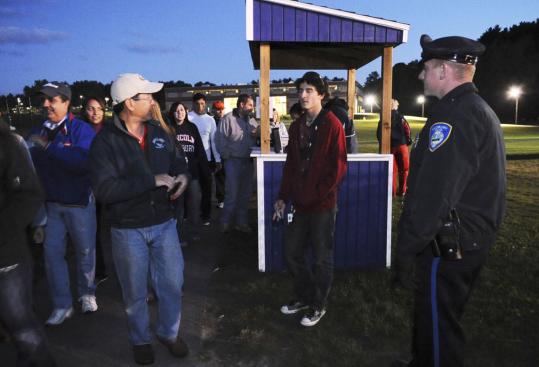 Lincoln-Sudbury is among the high schools to crack down on student drinking at events such as the Friday night football game. A Sudbury police officer stood at the entrance to a recent game. (Lisa Poole for the boston globe)
By Keith O'Brien Globe Staff / September 28, 2008
Text size – +

BELMONT - Of the dozen or so students who had to be pulled off the dance floor for being intoxicated at the Belmont High School's Hoedown last March, principal Mike Harvey recalls one 18-year-old senior in particular.

Unable to reach his parents, administrators placed the wobbly student in police custody - not to be charged, just to be watched until his parents could be located. But once at the police station, according to authorities, the student made a clumsy effort to escape, pushing an officer, garnering criminal charges, and ultimately influencing Harvey to make a bold, if disappointing, decision.

Dances this fall are canceled in Belmont. Harvey, a square-jawed wall of a man, said he had no choice but to take drastic measures. In doing so he joined a growing number of school administrators who are cracking down on the state's pervasive culture of underage drinking.

Following recent incidents at football games at Westwood High School and Lincoln-Sudbury Regional High School, administrators at those schools have not only suspended students but changed school policies, restricting what students can bring to games and even requiring them, on one occasion, to be accompanied by chaperones.

A growing number of high schools are now using breathalyzers at school events, testing students they believe to be intoxicated or sometimes testing every single student to make sure no one has been drinking. At Winchester High School dances, parents are required to sign in their students at the door. And many schools have adopted zero-tolerance policies.

If you're a senior at Woburn High School, for example, and you get caught drinking at the prom, you can forget about collecting your diploma on time.

"You're cooked for graduation," said Woburn High School principal Bob Norton, noting that violators must enroll in a counseling program that lasts about two months. "We don't put anybody on a fast track. If you get caught at senior prom, you don't graduate."

Even though Massachusetts' rates of underage drinking overall have fallen in recent years, state and local officials are troubled by what they're seeing. The state still has one of the highest rates of underage binge drinking in the country, according to the National Survey on Drug Use and Health, conducted by the Substance Abuse and Mental Health Services Administration.

In 2006, more than 11 percent of Massachusetts youths ages 12 to 17 reported binge drinking - defined as consuming five or more drinks in one sitting - during the prior month, according to the survey. For underage drinkers age 12 to 20, the rate was more than double: 23 percent. And the number of high school students reporting any drinking in the previous month, according to 2007 state data, is even higher.

"It's 46 percent," said Michael Botticelli, director of the state Bureau of Substance Abuse Services. "Forty-six percent of high school students have drunk alcohol in the past month. That's not reassuring data to me."

What's troubling, Botticelli said, is the impact that alcohol can have on a young person's life. Research has shown that adolescent alcohol use can have long-term effects on the brain and lead to higher rates of alcoholism. And according to a 2007 report from the US surgeon general, alcohol is a leading contributor to death from injuries - the main killer of people under 21. Annually, the surgeon general said, about 5,000 people under 21 die from alcohol-related injuries, including 1,900 in car crashes.

Such statistics often aren't persuasive enough to keep youths from drinking. But they're enough to keep parents up at night, wondering if their children will make it home safe. And the numbers - as well as the mounting incidents of drinking on school grounds in Massachusetts - are certainly getting the attention of administrators.

Last spring, after what happened at Belmont High's Hoedown, Harvey said he knew it was time to make a change.

"I was sitting there thinking, 'What am I doing here?' Really questioning why we do dances in general," he said.

"We've been very lucky that nobody's been seriously hurt, I think. We've had a lot of luck. And I don't want to be around when the luck runs out."

Concerned about underage drinking, high schools, including Newton, Wellesley, Westwood, and others, started turning to breathalyzers several years ago. A majority of high schools now use the devices in some way, according to Noel Pixley, president of the Massachusetts Secondary School Administrators' Association.

"How many schools can tell you they've had 18 consecutive proms - junior and senior proms - and haven't had a single issue with any students in possession, any bottles, any kids smelling of booze? None?" said John Brucato, the principal of Milford High School who began using breathalyzers at school events nine years ago. "We just haven't had issues."

Such testimonials are just one reason why Reading Memorial High School is considering using breathalyzers. In the next month, principal Joe Finigan hopes to present a breathalyzer proposal to the School Committee. Other schools, meanwhile, are stiffening breathalyzer policies already in place.

Unhappy that more than a dozen students showed up drunk at the junior prom last spring, Whitman-Hanson Regional High School administrators, who already owned a breathalyzer to be used just in case, purchased more devices and will be testing every student who attends a dance.

"My feeling was if I could keep students from drinking alcohol until 11:30 or until the end of the program, they would be inherently safer for the rest of the evening," said Whitman-Hanson principal Ed Lee.

"If that's the route you go, you're kind of admitting defeat," said John Ritchie, the principal of Lincoln-Sudbury Regional High School, where alcohol tainted the school's first football game of the season this month, leaving at least one student hospitalized, four cited by police, and seven suspended.

"If that's all you're doing, you're not dealing with the problem. That's like saying, 'People in prison are well-behaved.' "

Ritchie hopes to convene a meeting of Lincoln-Sudbury's school council this week to discuss adopting stiffer penalties for alcohol use, including, possibly, banning violators from the prom and other dances for the rest of the year.

Action is necessary, he said, given what he has learned in recent weeks students at his school: Drinking is far more widespread than he ever knew; water bottles don't always contain water; and students have traditionally seen the first football game of the fall, as well as other occasions, as a chance to get "juiced up."

Ritchie said he is intent not just on cracking down, but on changing the school's culture. And with his cancellation of dances in Belmont, Harvey hopes to do the same. For years, Belmont High School students say, there's been a tradition of drinking at the school, at least among some.

"I don't drink personally," said junior soccer player Josh Nelson. "But if you come back after the weekend, on a Monday, you hear stories about parties that happened and what people did. And if parents aren't going to be home the next weekend, people start planning then. You hear it."

In the spring of 2005, five students had to be hospitalized after showing up drunk to a dance. Harvey, who became principal the following fall, soon enacted a policy requiring students to sign a pledge not to drink before dances - and that worked for a while, he said. But with the Hoedown last spring and the arrest of one student, whose charges were later dismissed, it became clear, Harvey said, that something more needed to be done.

News that Belmont will have only two dances this year - the semiformal in the winter and the prom next spring - shocked students when Harvey announced it this month. Katie Christensen, a junior, called it "a wake-up call." And though many students were disappointed, they also understood.

Senior class president Deana DiSalvio said she supports Harvey's decision. It's time for students to understand that they can't drink and expect that the tragedies will always happen to someone else, she said.

"Thank God "we haven't had an accident."