THIS STORY HAS BEEN FORMATTED FOR EASY PRINTING
Globe South people

A perfect patient for teaching 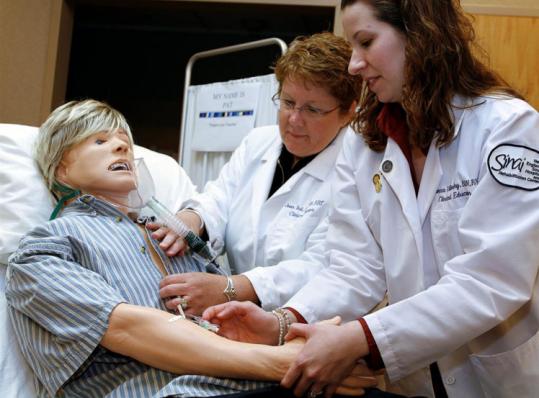 It bleeds, it goes into cardiac arrest, it can be catheterized. And it doesn't complain about hospital food.

"SimMan," a fully interactive patient simulator with lifelike skin that takes injections like a human (minus the wincing), has arrived at New England Sinai Hospital in Stoughton, one of three locations in the state to get the state-of-the-art device that allows medical staff to train on the life-life robotic device; the other locations are Metrowest Medical Center in Framingham and the nursing program at Fitchburg State Hospital, said Dr. Lawrence Hotes, chief medical officer at New England Sinai.

"SimMan allows us to create scenarios. You can put tracheotomy tubes in, chest tubes for a collapsed lung, it can be catheterized, and when drawing blood, a red liquid comes out," Hotes said of the simulated patient, which goes by the name of Pat, an acronym for "Patient and teacher."

Hotes said the military has used the device for years, putting it into war simulation settings "with realistic blood spurting out to emulate battle." At New England Sinai, the patient simulator can be set to mimic heart attacks, respiratory ailments, and a wide range of other human conditions. It is used to train medical staff and improve their skill sets in dealing with emergencies, Hotes said.

The simulator was funded by the Massachusetts Department of Higher Education.

FISH ARE HIS FRIENDS: Westwood resident John Masterson, 74, has been honored by the New England Aquarium in Boston during its annual Volunteer Appreciation Night. Masterson works in the education department and has donated more than 8,400 hours to the aquarium over 34 years. He is a self-taught fish aficionado, aquarium officials said. An American Airlines customer service agent, Masterson fulfilled his passion for the underwater world by meeting monthly with members of the Boston Aquarium Society and volunteering at the aquarium.

E-PIONEERS RECOGNIZED: James Hayes-Bohanan of Bridgewater, who teaches at Bridgewater State College, and Michelle Manganaro of Duxbury, who teaches at Massasoit Community College, were recognized as e-learning pioneers at the fourth annual Massachusetts Colleges Online (MCO) E-Learning Conference held at Middlesex Community College. Their courses, "Environmental Geography" and "Behavior Management in Child Care" respectively, were selected from more than 1,400 courses offered through MCO, a consortium of the nine state and 15 community colleges in Massachusetts, to receive the MCO Course of Distinction Award for 2008. Eighteen state college and community college professors from across the state were selected for the award

GOLFING FOR CAUSE: Through its Charity Golf Classic held at the Indian Pond Country Club in Kingston, a donation of $10,000 from the South Shore Savings Bank Charitable Foundation was presented to Hingham-based Friendship Home, to help the agency build a permanent respite care facility in Norwell. Since the tournament's inception in 1993, nearly $300,000 has been raised for various causes, said John C. Boucher, the bank's president and CEO.

BUSINESS BRIEFS: Norwell-based Jack Conway Realtors has launched a new program targeting first-time home buyers using the newly announced $7,500 federal tax credit, and has scheduled free seminars to explain the program and general first-time home-buying advice. The tax credit for first-time home buyers is part of the Housing and Economic Recovery Act of 2008, signed into law by President Bush this summer, which provides $300 billion of relief. The repayable tax credit is available to first-time buyers who purchase between April 9, 2008 and July 1, 2009, and who meet certain income guidelines. It must be paid back over 15 years in equal installments. The seminars are scheduled for Oct. 1 at the Shaw Center, 1 Lexington Ave., Brockton; Oct. 7 at the Holiday Inn on Route 228, Rockland; Oct. 14 at the Admiralty Inn, 51 Teaticket Highway, Falmouth; and Oct. 16 at the Wareham Lodge of Elks, 2855 Cranberry Highway, Wareham. To register, visit jackconway.com and click on the "Ask me How to Get $7,500" button.

Brenda Wornum Moore has been named president of the Hingham-based South Shore Women's Business Network. She is the founder and president of BWM Consulting in Brockton, where she lives.

Westwood resident Neil Sherring has been appointed as co-chair of the Massachusetts Bar Association's general practice, solo and small-firm section. Sherring is managing partner of Dakoyannis & Sherring in Westwood.

Paul E. Kandarian can be reached at Kandarian@globe.com