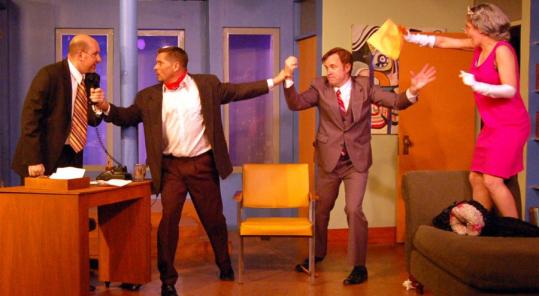 Acme Theater performers (from left) Dave Fisher, Will McGregor, Dave Wood and Robin Rapoport take the audience on a nutty romp in the Maynard troupe's season opener, ''Meanwhile, Back on the Couch.''
By Denise Taylor Globe Correspondent / September 25, 2008
Text size – +

The brochures are printed, the envelopes stuffed, and the e-mails ready to fire. It's that time of year when area theatrical troupes stalk their most important prey: the season subscriber. This, however, is no chase to run from. Local offerings this year are not only particularly interesting, they are a bargain.

Subscribers to the Acme Theater in Maynard don't just receive season tickets, easy exchanges, and first dibs on seats for the New Works show, which always sells out. They also get invited to subscriber-only events, such as performance artist Slash Coleman's premier last year at Acme of the very show he's now taping for a national PBS special.

This year's season is already underway with a high-energy take on a classic comedy, "Meanwhile, Back on the Couch," about a shrink who may not have his patient's best interests in mind.

Next up is Lee Blessing's brilliantly written "Independence," a drama about the tensions and ties between mothers and daughters, followed by comedian Steve Martin's offbeat look at genius in "Picasso at the Lapin Agile." The season ends in the spring with "The Dead Guy," a new dark comedy about a reality TV show that, yes, results in a dead guy.

The Hovey Players in Waltham treat subscribers to special events, a discount card for area businesses, a free ticket for one show for a friend, and, get this, free concessions at intermission.

The season's first show, a modern take on "Romeo & Juliet," is running now. Selections then take a number of interesting turns to include Neal Utterback's "Second," a new work about six lost souls in New York City visited by a mysterious stranger on Christmas Eve. In January, it's surfer movie meets Hitchcock thriller in the campy spoof "Psycho Beach Party," followed by Neil LaBute's comic study in sexual politics, "Some Girls," and then the season goes out on a riotous note in May with "Zombies from the Beyond," a '50s musical with no less than an alien invasion.

Season subscribers for Wayland's Vokes Players snap up an impressive 65 percent of seats each year, and are rewarded with discounts, reserved seats, and special events, such as the free annual Scenes Night, where troupe members perform snippets of their favorite plays. The greatest benefit, though, is this talented troupe's knack for digging up brilliant but often overlooked works.

The season opens Oct. 30 with "A Man of No Importance" by Tony-winning duo Lynn Aherns and Stephen Flaherty ("Ragtime"). To the tune of gorgeous ballads and lively reels, the musical comedy tells the tale of a poetry-loving Dublin bus conductor. Next up is Jean Anouilh's politically charged translation of the Greek tragedy "Antigone," written during the Nazi occupation of France, in February, and "The Cripple of Inishmaan" then takes on small-mindedness in a small Irish town with a dose of dark comedy. Closing out the season in July is "Shaw3," three short works by George Bernard Shaw.

This may be a college troupe, but the Brandeis theater program is known for producing serious talent, production values are high, and shows also usually feature a professional actor or two.

The season opens Oct. 16 with Stephen Sondheim's first musical, "Saturday Night," a light-hearted 1920s romantic comedy. Next, Edith Wharton's exploration of women with ambition, "House of Mirth," is recast as a dance play in "Tea and Flowers, Purity and Grace." Then heavyweights Hermann Hesse and Euripides round out the season with artistic director Eric Hill's adaptation of "Siddhartha: A Jungian Fantasy in Three Movements with Prelude," and a translation of the tragedy "Hecuba" by Brandeis professors Eirene Visvardi and Leonard Muellner and his students to be performed in April.

Show after show, this mixed pro and community troupe in Waltham delivers all the glitz, glam, and sizzle of Broadway. It also treats year-round VIP subscribers like family, greeting many at the door, inviting them to meet-the-cast parties, and providing preferred seating.

The Waltham troupe's fall season launches with "Remembering the '40s," a glittering, high-kicking, song, dance, and comedy skit time-capsule performed twice on Oct. 4. Next up, bejeweled master tribute artist Martin Preston channels "Liberace: The Legend Lives!" (there are always tears). Then the year goes out with a sparkle with the Reagle's holiday spectacular, "It's Christmastime," the only production in the nation with permission to perform Radio City's Tin Soldier Salute.

Have a tip for the Arts column? Please contact westarts@globe.com.