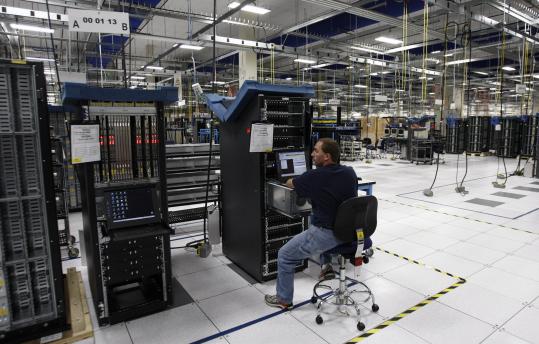 One of the assembly and testing areas of the EMC Corp. plant in Franklin, which sits not far from where textile mills once dominated the area. (Robert E. Klein for the Boston Globe)
By John Dyer Globe Correspondent / September 21, 2008
Text size – +

Years ago, factories lined the rivers and railroad tracks in towns west of Boston. Now they line Interstate 495.

It seems counterintuitive, but in an era when industrial jobs are disappearing throughout the United States, a study says manufacturing is alive and well in Massachusetts, especially along the arc of highway running between the New Hampshire and Rhode Island borders.

But factories in Boston's western suburbs are nothing like the mills of yesteryear. High-tech businesses rooted in high education levels and land that is near, but cheaper than, the Boston metropolitan area are more representative of the region's manufacturing sector, said company executives and economists.

That mix has made local manufacturing internationally competitive and successful enough that keeping factories here and providing the infrastructure they need to thrive is a bigger challenge now than attracting them in the first place, the economists and executives said.

"They are very skilled from a technical standpoint," said Kerouac, referring to EMC employees. "It's not just assembling it and plugging it into the wall. They're testing features and functions. They're testing software."

Manufacturers like EMC have also beefed up the region economically compared with the rest of the state.

The average annual wage of the 44,400 workers in local manufacturing was $84,100, according to a study released earlier this month by the 495/MetroWest Corridor Partnership, a Westborough-based nonprofit organization that promotes economic development. A total of 285,500 people are employed in the region, the study said.

That salary figure was more than the $58,000 average for workers in other employment sectors along I-495, and the $65,300 average for manufacturing employees throughout the state. The average salary for all Massachusetts workers was $52,400, the study found.

Of the $16.5 billion in payroll spending generated along I-495, manufacturing jobs account for around $3.7 billion. That was second only to professional services, which paid $4.2 billion in salaries.

"Obviously, manufacturing is gargantuan compared to the state as a whole," said Paul Matthews, executive director of the partnership. "Whereas there is an image of manufacturing as small and family-owned in this state, and in many cases that's true, this region is different."

Using data from the state's Executive Office of Labor and Workforce Development, the study's authors reached the salary figures by dividing the payrolls of manufacturers - for jobs from custodians to chief executives - in the I-495 region by the number of employees in the manufacturing sector.

The study's figures were based on 2006 data, the most recent available, and apply to 32 communities along I-495, north and south of Route 9, between Worcester and Natick.

While the Assabet, Concord, and Sudbury rivers once powered mills that produced clothes and shoes for the entire country, nowadays the region has few natural resources that might generate prosperity. Instead, brainpower fuels local manufacturers, said executives.

"Just look at all the colleges and universities," said Adrian Adams, president and chief executive officer of Sepracor, a pharmaceutical manufacturer in Marlborough. Higher education "is a strong attraction that tends to balance out any costs."

Michael El-Hillow, chief financial officer of in Marlborough, said the area's highly educated workforce was crucial to his company's formation, as well as its success in finding employees and a market for the company's solar panels. An MIT professor founded Evergreen in 1994, he said.

"The educational community in Massachusetts is very supportive of companies like ours," said El-Hillow.

Residents and officials were also forward-thinking enough to welcome the company's solar power business, said El-Hillow, adding that most people in Massachusetts don't scoff at the idea of global warming, for example.

"You've got to be concerned about the environment," he said. "It's a good state to do business for a tech company."

Sepracor and Evergreen Solar settled in Marlborough because the city was within easy reach of Boston and land was significantly less expensive than inside Route 128, executives and economists said.

Despite tough times, both companies are expanding. Sepracor is constructing a 143,000-square-foot building to enlarge its headquarters. Evergreen recently opened a mammoth new facility in Devens to manufacture solar panels.

Large salaries are also luring employees. High-paying jobs in corporate headquarters, high-tech manufacturing facilities, and research labs have boosted wealth in the area and the state, said Maureen Dunne, another economics professor at Framingham State who coauthored the study.

"Not only did we add jobs, we added high-wage jobs," said Dunne. "That's an important piece. We have not always been a high-wage state."

But economic success, including larger cars and bigger homes, comes with a price, the foremost being the strain on the region's infrastructure, said executives and economists. The Massachusetts Turnpike is reaching its limits. Many towns are straining to keep up with development. School budgets are thin. The state has yet to increase commuter rail service to its promised levels.

Economic expansion is going to require more workers to move or commute to the area. Towns are already spending at their Proposition 2 1/2 limits, so it is unclear where the funding would come from to handle the influx, said Matthews.

EMC's Kerouac said the high cost of Massachusetts real estate had sometimes deterred qualified workers from North Carolina and other low-cost states from moving here. But that problem has lessened as the real estate market has chilled recently.

"A couple of years ago, when housing was at its peak, it was very difficult to get people to move to the state," he said.

Overseas competition to attract companies like EMC and others is also driving politicians to work overtime to make sure businesses stay and expand in Massachusetts. The state government gave Framingham around $13 million for water and sewer improvements that needed for its new manufacturing facility, which is set to celebrate its opening tomorrow with a ceremony to be attended by the governor, among others. .

Politicians said they are spending those taxpayer dollars because they don't want to lose home-grown manufacturers to countries such as India, where workers are often highly trained but expect far less in salaries. Globalization has driven the success of local companies, but success might also pull them away if their overhead in Massachusetts becomes unbearable, they said.

But Spilka wants to make sure that companies seeking to start businesses with their research can do so easily.

"Massachusetts has so much terrific education and research," she said. "We want to ensure that when technology is transferred to manufacturing, hopefully the manufacturing stays in Massachusetts."

El-Hillow said he expects Evergreen to grow, but most of the company's significant future investments in facilities would probably be abroad.

But that's positive news, he said, since the plans reflect the company's confidence in general.

"Our next expansion is going outside the US," he said. "We want our factories near our customers. Solar panels cost a lot to ship."