THIS STORY HAS BEEN FORMATTED FOR EASY PRINTING
Citywide 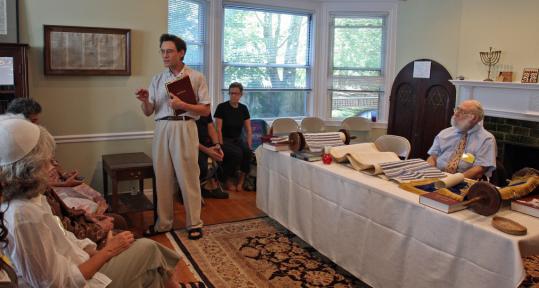 For close to what it costs to see Barbra Streisand in concert, some Boston Jews will soon attend services on the holiest days in their calendar.

The high holy daysbegin with Rosh Hashana, the Jewish New Year, at sundown on Sept. 29 and end with Yom Kippur, the Day of Atonement, at nightfall on Thursday, Oct. 9.

The holidays are a chance for Jews to reflect on their relationship with God. At most synagogues, the high holy day services are the most significant of the year, but attendance is often expensive.

Some congregations allow only dues-paying members to purchase tickets, thus motivating members to pay their dues on time, while others give nonmembers the same opportunity to buy tickets - but at a higher cost.

Holiday service ticket prices can cost as much as $1,925 per year for a family membership at Brookline's Congregation Kehillath Israel, which yields two tickets to holiday services.

Synagogues don't pass the collection plate during services like some churches do - Jews are forbidden from touching money on the Sabbath - and rabbis and temple executives say the holiday ticket sales are an important source of revenue. While congregations use this limited time to garner the bulk of their income, some in the community feel excluded. Young adults, living on smaller salaries with looming student loans, can have an especially hard time paying for holiday admission.

In Boston, this is where GesherCity steps in. A welcome wagon for Jewish 20- and 30-somethings, the group matches up high holiday ticket-seekers with 45 synagogues in the Boston area willing to let them attend for free or at a discounted rate. Last year, the organization had 250 people clamoring for seats; this year, event coordinator Hilary Cohen said the number rose by 20 percent.

"People are so thankful because they don't want to spend hundreds of dollars just to go for the high holidays," said Cohen, 24. "It's definitely a problem we saw in the community, especially for young adults with low salaries."

Cohen said many of the temples that participate hope they'll be remembered as welcoming beacons to religious life when the people they help begin looking to join a synagogue.

The Boston Synagogue works with GesherCity for that very reason, said Susan Weingarten, chairwoman of the synagogue's board. Holiday tickets at the downtown congregation cost anywhere from $75 to $275.

And if the young folks GesherCity attracts do decide to join a synagogue, "We want them to be comfortable choosing a place they've already been," said Weingarten.

Though Cohen lives in the North End, she said she goes home to Andover for the holidays because tickets are covered by her parent's temple membership.

"Personally, I think it's sad that young adults need to worry so much about paying for the high holidays," Cohen said. "If they were going to church, they wouldn't be paying a nickel."

Throughout college, Lizzie Bell brought friends whose families lived far away to her parents' temple, Beth Shalom in Needham, for free, using their student identification cards. After graduating from Wellesley, the 27-year-old found that tickets would now cost around $300 each for her and her friends, who are not members of the temple.

"I didn't realize how expensive it was until the temple cracked down on who was coming," said Bell, who lives in Cambridge.

After reading about GesherCity online, Bell decided to fill out a form for free tickets, on the off chance that Beth Shalom participated. She said though the synagogue was not originally part of the program, Cohen talked organizers into providing three tickets for Bell and her friends.

"I was facing spending the high holidays without my family for the first time," Bell said. "But Hilary really came through for me when I didn't know what I was going to do."

At Kehillath Israel in Brookline, a large egalitarian congregation, nonmembers pay different prices depending on where they want to sit; $450 for the front or $350 for the back. The temple's website says anyone unable to pay can submit a confidential request for a "dues reduction." Membership also includes enrollment at the congregation's nursery school and tuition at the religious school. Harvey Rosenbloom, the synagogue's financial manager, said while the temple, which has sold more than 1,200 seats this year, does make money from the sales, high holiday tickets only cover part of their annual costs.

Rabbi Victor Reinstein, of the only synagogue in Jamaica Plain, says he never liked the practice of selling high holiday tickets. Since opening Congregation Nehar Shalom in 2005, he has not instituted a charge or reserve seating for the holy days. In lieu of a membership fee for its 35 families, Reinstein said people can contribute a confidential amount of their choosing.

"I don't mean to downplay our costs," Reinstein said. "We have very real financial needs and we need to meet those, but we're committed to a community that is equally welcoming."

The synagogue keeps its expenses low in part by operating out of Reinstein's house, he said. Outreach for more members, and more donations, is ongoing. Last year, 130 people filled his downstairs for Rosh Hashana and Yom Kippur services. Reinstein said he plans to keep Nehar Shalom free of high holiday tickets.