A house with wings

Zoo, Roxbury man build a home to bring bats back 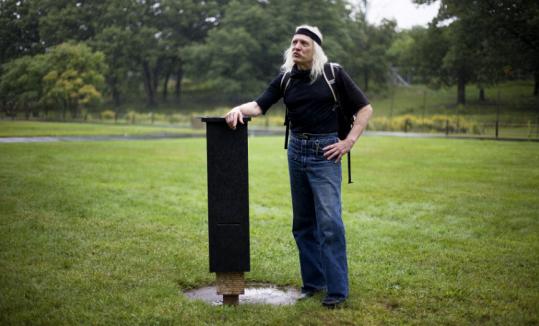 Luther the tiger, Jana the giraffe, and Evita the zebra could soon have new neighbors at the Franklin Park Zoo: lots of little brown bats.

As part of an effort to lure more of the winged animals to the city, the zoo and a 67-year-old bat enthusiast from Roxbury have joined forces to build what they consider to be palatial digs for the critters, a slate-roofed, wooden house large enough for 300 bats to roost away the daylight hours.

Yes, they are actually putting out a welcome mat for those flying mammals that freak out homeowners by nesting in attics or closed patio umbrellas.

"We want to show off the beauty of bats and get urban people to love them or at least respect them," said Robert C. Berry, the Roxbury resident. With the help of a friend, Berry built a nearly 5-foot tall chimney-like house for them.

Berry and zoo officials have become concerned that they have seen fewer bats soaring in the city. Berry attributes it to the loss of open space to development and the demolition of abandoned factories, churches, and other structures where bats tend to take up summer lodging.

Their effort is occurring as scientists investigate the deaths of thousands of bats in New England and New York over the past two years, possibly because of a fuzzy, white fungus.

While many folks may welcome the disappearance of a nocturnal animal often associated with vampires and rabies, the benefits of bats far outweigh the negatives, Berry and zoo officials say. A bat, they pointed out, eats hundreds of human-biting and crop-infesting insects a night and some pollinate various vegetation.

"Anything we can do to enhance their ability to live and survive is good, especially right now," said John Linehan, chief executive of Zoo New England, which operates the Franklin Park Zoo.

Across Eastern Massachusetts, many homeowners and a handful of town governments have erected bat houses in recent years to keep down mosquito populations, which carry potentially fatal diseases such as West Nile and Eastern equine encephalitis.

But many specialists argue that bats prefer larger insects and would have negligible effect on mosquito control.

Bats are not new to the zoo. The zoo has an exhibit of fruit bats, but those are behind glass. The new structure will house a species found in New England, myotis lucifugus (little brown bats), and will be in the open.

In seeking dwellers, the zoo will rely on a bat's instinct to find the house.

The furry animal should be drawn to the house, without the use of bait, because the structure is built to simulate the kind of spaces the creatures like, such as crevices in dead trees, rocks, or eaves of houses.

The house will be placed atop a 20-foot pole and behind a fence 40 feet away from people, in deference to concerns from public health officials about rabies.

The exact location of the house has not been determined.

"We are looking to build a colony here so people can view the bats at dusk and dawn as they come out of the house or come back in," said Berry, who used to see bats flickering around his house in the Fountain Hill section of Roxbury until an abandoned church was torn down and more housing went up.

The Franklin Park Zoo would become one of a handful of zoos nationwide to have bat houses, according to the Organization for Bat Conservation.

The Detroit Zoo, for example, put up about a half-dozen bat houses a few years ago and has had no problems with bats spreading rabies or pestering people or other animals, a zoo official said last week.

According to the US Fish and Wildlife Service, less than half of 1 percent of bats carry the rabies virus. Berry said he would like to see bat houses go up in other parts of the city, such as along the Charles River, on Boston Common, or at the Public Garden - pretty much any part of the city with open space.

"We should move the wilderness and rurality into urbanity," Berry said. "If bats cease to exist, we will be up to our knees in insects."

The Boston Public Health Commission supports the bat house at Franklin Park Zoo, but officials have concerns about adding them to public parks.

"We know bats can carry rabies," said Anita Barry, the commission's director of communicable disease control. "If someone wanted to put a bat house on Boston Common where people could walk up and see bats personally, I don't think that would be a good idea."