THIS STORY HAS BEEN FORMATTED FOR EASY PRINTING
Globe Northwest Sports

Morrissey is on the run for Williams College 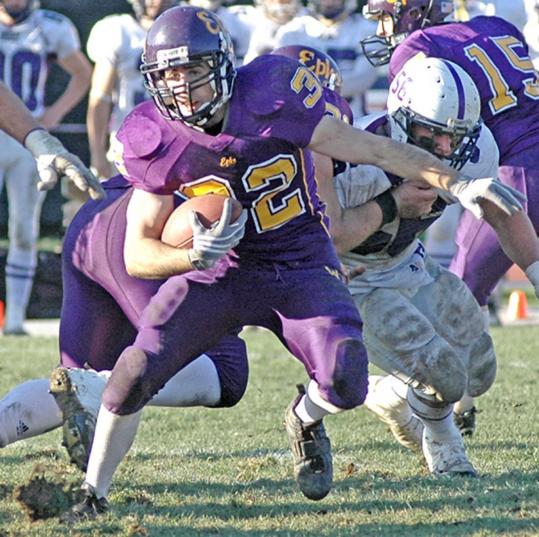 Brian Morrissey in action last season against Amherst. He rushed for 939 yards and 13 touchdowns on the year.
By Sapna Pathak Globe Correspondent / September 14, 2008
Text size – +

Brian Morrissey feels a sense of urgency. And his off-season training regimen reflected his focus and dedication: He didn't miss a single lift or a single workout in preparation for his final season of college football, as a senior captain at Williams College.

On a Williams team that annually contends for the title in the New England Small College Athletic Conference (NESCAC), Morrissey will be a key cog in the Ephs' attack, a 5-foot-9-inch, 200-pound running back capable of putting the offense on his broad shoulders.

It's a role the Winchester native relishes.

Three years ago, Morrissey sat in a room full of his peers at the Globe's All-Scholastic Awards ceremony, listening to a speech by Boston College men's basketball coach Al Skinner. Morrissey had just completed a starry four-year, three-sport career at Governor's Academy in Byfield, ready to embark on the college experience.

In June, Morrissey stepped up to the podium in front of this year's collection of all-scholastic athletes, and drawing on his own experience as a college athlete, and a few nuggets from Skinner's speech, spoke of accountability and confidence.

"I wanted to say something that would stick with them when they were transitioning into college," said Morrissey.

"Having accountability is so different in high school and college. In college, you're not going to have a coach telling you all the little things to do. It's on you. It's the same in the classroom: Your teachers expect more from you. You have to account for yourself because your teammates are depending on it."

With the graduation of two-time NESCAC Player of the Year Pat Lucey at quarterback, the Ephs will be counting on Morrissey more than ever.

Williams, which closed last season with six straight wins to finish 6-2, kicks off its season on Saturday, hosting Colby.

Williams coach Mike Whalen says Morrissey will be up to the task.

"He came in and we knew we had talent," said Whalen. "We put him on the field as a freshman. It was the final game of the year, against our rival Amherst, and he put up 120 yards. We knew we had someone special. He's a very hard worker and very diligent. What's amazing is he has pride in everything he does: blocking, pass protection, receiving. He's not a one-dimensional running back."

Nor a one-dimensional college athlete; he is also a starter on the Ephs' lacrosse team, earning All-NESCAC and All-New England honors this past spring.

Morrissey brings speed and strength to both fields. As a running back, his yards after contact have come naturally, turning would-be losses into big gains.

Morrissey led the Ephs in rushing last year, totaling 939 yards and 13 rushing touchdowns. He averaged 4.4 yards per carry and 117.4 yards per game. His 14 touchdowns led the offense in scoring.

"He rarely goes down on first contact," said Whalen. "His YAC [yards after catch] is great. He's one of those guys who has a forward lean and who, every time, gets the job done. He hasn't had many injuries, either, so he's been extremely productive for us."

As a longstick midfielder, he helped the program earn its first bid to the NCAA Division 3 tournament after the Ephs went 10-6 and won the NESCAC title.

"To play two sports at the level he does is what sets him apart from so many others," said Whalen. "One thing you can tell from speaking with or seeing him is that he is one focused young man. He's definitely led by example, but when he has something to say, he'll say it. And when he talks, his teammates listen. He'll be a good mix with the other captain," Trevor Powers.

The youngest of three brothers, Morrissey jumped into sports early on, playing with older brothers Paul, who played hockey for the University of Connecticut, and J.J., who was a lacrosse player at the University of Virginia.

Football, however, has been his favorite sport. "I've been playing it since I was 7," he said. "I definitely always knew that I if I went to college for a sport, it would be football."

Morrissey increased the intensity of his off-season regimen this summer, spending four days a week in the weight room and running almost daily.

With a Week 2 matchup against perennial contender Trinity, defending conference champion Middlebury in Week 4, and the season finale against rival Amherst, there will be no shortage of challenges in the eight-week season.

"This year, the title is up for grabs. It's pretty balanced. . . . We only play eight games so it's like an eight-game playoff. You lose one game and it could be it."

Sapna Pathak can be reached at sportsgalsp@gmail.com.

'He has pride in everything he does: blocking, pass protection, receiving,' says coach Mike Whalen of Brian Morrissey (above).