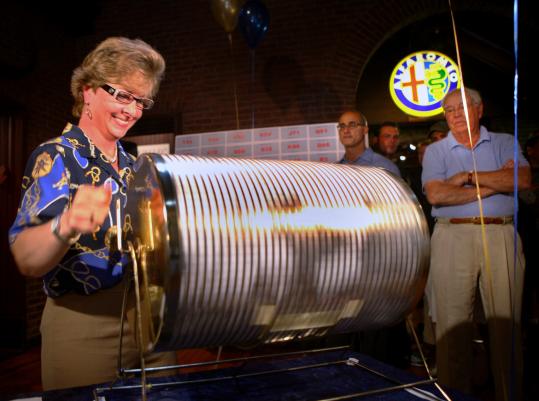 Mary Maguire of AAA prepared to pick a number during a live drawing of the 2008 license plate lottery at Larz Anderson Park in Brookline yesterday. Below, vehicle owners lined up for the drawing. More than 4,300 applied for 164 plates up for grabs. (Wendy Maeda/Globe Staff)
By Megan Woolhouse Globe Staff / September 7, 2008
Text size – +

BROOKLINE - To Keith Najarian, winning a four-digit license plate is not just a novelty; it is a personal mission. For the last seven years he has tried to win one through the state lottery without success.

Yesterday, he tried his luck once again, driving 1 1/2 hours from his East Brookfield home to watch the annual drawing by Registry of Motor Vehicle officials at Larz Anderson Park.

"I don't know why we're chasing these plates," Najarian said yesterday, as he nervously awaited the giveaway. "Maybe it's so everyone will know who we are."

The quest drew more than 200 people to the carriage house at the park yesterday where state officials drew names to give away 164 license plates with four or fewer numbers and letters. More than 4,300 people applied. There was even a guest of honor with seeming rock star status. Richard Dennis of Scituate, the stepson of former Boston mayor and Massachusetts governor James Michael Curley, showed up in his camel-colored Cadillac with a license plate bearing a single, stylish digit: 5.

"People comment on it all the time," Dennis said in an interview before the event. "I go to the mall and I know they're looking at the plate. They even point."

To the uninitiated, there are as many as 15,000 so-called reserve license plates with low numbers and they can have tremendous cachet. For an extra $40 every two years, family members can obtain low-digit plates that can be passed down from one family member to another. Dennis, for instance, received his coveted single-digit plate from his brother, who inherited from his mother, who got it from her former husband, the governor.

Part of the allure of the plates rests in the fact that in years gone by, they signified a driver who had special political clout or social status. The plates suggested to police that a driver was someone important and they might consider turning a blind eye to driving infractions. Yesterday, Dennis said that is surely no longer the case, as he gets "ticketed all the time."

The registry began giving away the plates in a public lottery about 11 years ago, as a way to combat perceptions that the system was rigged in favor of politically connected or well-heeled state residents.

Yesterday, reserve plate number 1 was on display. The black embossed plate was issued to Frederick Tudor in 1903. It was unavailable yesterday. Registry officials said the Tudor family, who live in Chicago, lent it to the registry. It was current and legitimate, they said.

While some families treat the tags like heirlooms, the plates up for grabs yesterday were from drivers who had canceled their registration. Some had died or simply didn't care about passing on the legacy.

That was not the case in 1999, when a Boston developer paid $10,000 for a plate number 94 from a Falmouth widow he met in a parking lot. After inquiries from the Globe, the Registry revoked that registration number.

Yesterday's drawing took place inside the Anderson Carriage House, home to an antique car collection and driving memorabilia. About halfway through the drawing, registry officials stopped the festivities to announce that Brookline police were ticketing cars parked illegally in the lot.

In 2006, the registry held its drawing on radio talk show host Howie Carr's program, and Carr won one of the plates. Registry officials called it a coincidence but Medford resident Steve Santoro, who was at yesterday's drawing, was skeptical.

"They pull the numbers on the show and he gets one? C'mon," Santoro said.

Santoro said his father was a very proud owner of a five-digit plate. Yesterday he was trying to win his second four-digit plate. Sadly, he did not.

Najarian, however, walked away victorious.

When registry officials called his name, the Worcester pharmacist raised clenched fists into the air in victory. He charged to the front of the room to shake hands with state registrar Rachel Kaprelian.

In the adrenaline surge, he forgot his new plate number. It was 4783, a number with absolutely no special significance to him other than the fact he liked that it didn't have letters. He will put it on his black GMC truck, discarding the old five-digit plate.

"Going down to four digits?" he said. "It's fantastic."