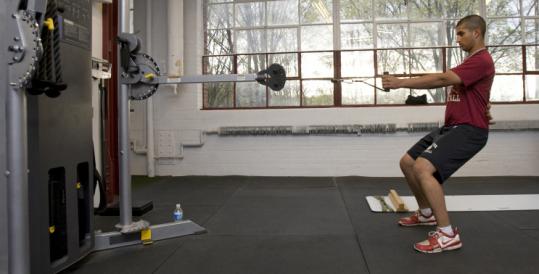 Today, the Weston High senior-to-be has not only erased that stigma but transformed himself into one of the state's top pitching prospects.

Earlier this week, Bloom was accepted at Stanford University; and 24 hours later, the 6-foot-2, 190-pound righthander made a verbal commitment to the Cardinals baseball program.

Bloom, who has also been in contact with a scout for the New York Yankees, chose Stanford over Duke, Boston College, Vanderbilt, and North Carolina.

"I can't say enough about it, really," said Bloom, who is also in the top 10 percent of his class at Weston High, with a weighted 4.2 grade-point average. "I don't even know if I knew what I was capable of."

NCAA rules prohibit college coaches from commenting on a player until they have signed a national letter of intent.

Bloom's leap to a major college prospect is impressive.

In his first two seasons on the Weston varsity, he compiled a 13-1 record, but his fastball topped out in the low 80s and he never struck out more than six batters in a game.

Last August, Bloom went to work on his body, starting an eight-month strength and conditioning program under the guidance of Eric Cressey, a Hudson-based athletic trainer.

This spring, he returned to the diamond leaner but with more bulk on his lanky frame. Bloom can now locate five pitches for strikes; early in the high school season, his fastball was clocked at 91 miles per hour, and he struck out 36 in his first three starts.

His velocity dipped as the season wore on, and he finished with just a 3-5 record as the Wildcats finished 13-9. But in 57 innings, he struck out more than 75 batters..

This summer, pitching for the New England Ruffnecks 18-and-under college prospects team, he returned to form, hitting 88 m.p.h. with regularity - but not without early struggles. In his first start in June at the Mid-Summer Classic showcase, in Charleston, S.C., Bloom recalls watching one of the first batters he faced blast his 2-0 fastball for a 410-foot triple.

But after that, he buckled down. By the end of the season, he says, "I was throwing 3-1 curveballs, 3-1 changeups, 3-0 curves. It was partly just from gaining confidence."

Ruffnecks coach Kirk Fredericks, also the head coach at Dual County League rival Lincoln-Sudbury Regional High, said Bloom "learned how to become a pitcher at that level. Against those teams from Virginia, where a majority of the kids are going to places like Virginia Tech or UNC, you make mistake pitches and those go out of the ballpark."

With the summer baseball season over, Bloom is back in the weight room with Cressey, working out six days a week for a total of roughly 30 hours.

Headed into Thursday's action, they were 2-2 in the tourney.

"It's kind of a weird accomplishment, but we're happy," said head coach Robyn King with a laugh. "The competition out here is amazing." Winning on this stage, she adds, "really says we can compete."

Ashland High star Nicole D'Argento was one of three aces the Crush were counting on this summer, but an injury kept her from pitching for nearly a month. D'Argento, the state's Gatorade Player of the Year this spring, pitched two innings in a doubleheader against the Stratford (Conn.) Brakettes, and came on for three innings of relief in the Crush's first game, a 4-0 Monday win over an Oregon team, the Northwest Bullets.

She was also the Crush's leading hitter, with a .439 average.

Marlborough High's Jessie Bryant (.289) has been making her biggest impact in the outfield and along the base paths with heady running. She's also been known to lay down a bunt or two.

"Her defense has always been 100 percent," King said.