THIS STORY HAS BEEN FORMATTED FOR EASY PRINTING
Dedham

Consolidation seen as boon to square 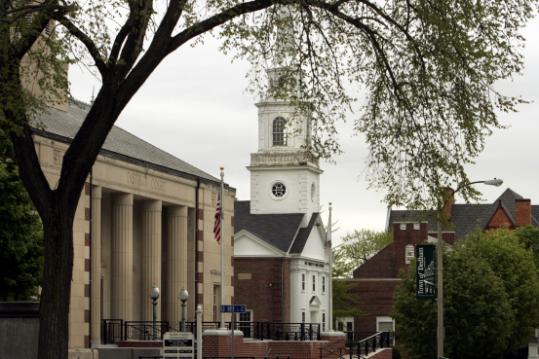 The Norfolk County court system - for years sprawled across various locations in three towns - is to be united, finally, in downtown Dedham.

The consolidation is part of the bond bill that lawmakers approved in the final hours of the just-concluded session, and, at week's end, was headed to the governor for his expected signature.

Bringing the far-flung parts of the county court to Dedham is being hailed as good for citizens and for the Dedham Square business community.

"It is so exciting if we can make justice more available. It's just common sense, playing on our strengths and being accountable," said state Senator Marian Walsh, a Democrat from West Roxbury who also represents Dedham, Westwood, and Norwood. Walsh initiated the plan.

"We're all excited from an economic stimulus perspective," said Town Administrator William Keegan. "It will support businesses, office space, and restaurants. There will be a greater level of participation. It's just great news for us."

Keegan said he expects the design phase for the Norfolk County Courts complex to last two to three years, with actual construction and renovation culminating in five or six years.

Currently, Norfolk County Superior and District courts are on in Dedham, the Juvenile Court and the law library are in Norwood, and the district attorney's office is in Canton.

Estimates to revamp buildings and relocate them to Dedham and provide for a parking facility are reaching about $130 million.

Governor Deval Patrick set aside $750,000 in his version of the bond bill to create a plan for the court complex, but after Walsh and others pushed for more funding, lawmakers included an additional $20 million in the bill.

It is up to Patrick to decide when to borrow the money and also when to spend it, officials said.

Once that happens, the state Division of Capital Asset Management will create a formal design for the Dedham project. "Then we will find out how much impact it will have on the square," said Keegan.

To date, he said, work to bring the courts home has been a collaborative effort including Dedham Square Circle, a nonprofit focused on invigorating Dedham Square by promoting its history, arts, and culture. Members have beautified sidewalks and lighting fixtures, attracted new stores, and worked to promote existing ones.

State Representative Paul McMurtry, Democrat of Dedham, who owns one of the square's most recognizable landmarks, the Dedham Community Theatre, called the legislative vote "certainly a commitment to the county courts and the town of Dedham."

Having court offices dispersed across the county, he said, came about because of a lack of space in Dedham, and righting the situation will have "a positive impact on the justice system."