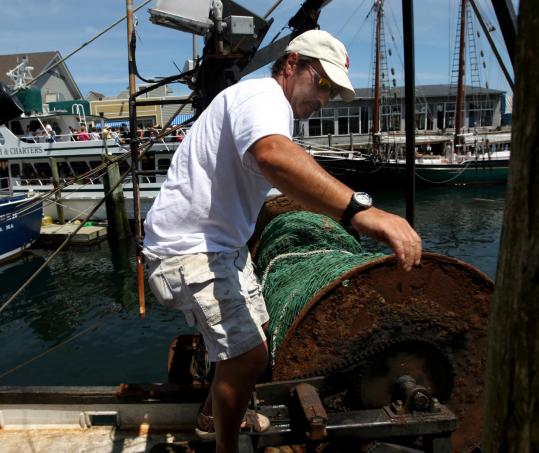 GLOUCESTER - Some fishermen are bitter about making a deal with gas companies. Others said they had no choice. All said they'd rather not have to take the $12.6 million from the two liquefied natural gas companies that are planning terminals off the North Shore coast.

But if you head down to the docks along Gloucester Harbor and speak with fishermen, they'll also tell you that the $12.6 million could be the key to keeping their depressed industry from collapsing.

"This could end up being the only thing that keeps us in the fish business," said Vito Giacalone, a fisherman and longtime advocate who opposed the LNG terminals that were approved by the federal government last year. In his public comments against the Excelerate Energy LLC and Neptune Energy LLC terminals, Giacalone suggested that any mitigation funds be directed toward North Shore fishermen who would no longer be able to work around the LNG sites - home to fertile fishing grounds.

The state Environmental Protection Agency agreed, and directed the largest portion of the $47 million - $12.6 million - toward the creation of the Gloucester Fishing Community Preservation Fund. With Giacalone serving as president of the nonprofit, the fund just completed its first year. It is designed to subsidize fishermen who want to work more than their standard federal allotment of 48 days a year.

Over the last year, the fund has spent more than $4 million to purchase 25 federal fishing permits. Those permits represent more than 800 workdays at sea, and under the fund's program, North Shore fishermen are eligible to lease the days for an average of $75 a day - a fraction of the going daily rate of $200 to $250. Last year, 63 fishermen took part in the program, with each receiving an average of 13 days. Giacalone said that over time, his nonprofit would spend at least another $6 million to acquire additional federal ground-fish fishing permits.

"The fund is a lifeline, for sure. It means survival for us," said Dustin Ketchopulos, who keeps his boat in Rockport but fishes off the Gloucester coast.

Just 25 years ago, fishing was king in America's most storied fishing harbor. Back then, there were almost 1,000 fishermen working on the harbor, and there were no limits on how many days a year one could work, or how much fish could be caught. There were more than 250 boats in the harbor, and most were used for overnight trips lasting up to 10 days.

"There were so many boats in the water that you could almost walk across the harbor," Giacalone remembers.

But with strict federal regulations introduced to limit overfishing and to rebuild stocks such as cod and flounder, most of those boats and fishermen have disappeared. In the last six years, the new regulations cut fishermen's days at sea from 88 to 48, while setting catch limits such as 800 pounds of cod a day.

New private permits are no longer available. The existing ones can fetch up to $150,000 if a fisherman chooses to sell. More likely, permit holders lease some of their 48 days.

Gloucester's fishing fleet has transformed to a workforce that mostly works days. Just 88 ground-fish boats remain, down from more than 250 just six years ago. And with the restrictions, there's been a reduction in pay: 20 years ago a fishermen could make $100,000 or more a year. But many now say their pay has been cut in half. Many have remortgaged their homes, eliminated boat insurance, cut out boat maintenance, and taken the biggest risk a fisherman can while at sea: fishing alone.

Like most who still work these waters, Ignazio Sanfilippo comes from a family of fishermen. As an 11-year-old, he began fishing with his father in 1969, and six years later he quit school to run his own boat. "I had a crew of three. I was the captain and the two guys fishing with me were married with kids," he recalled, adding that he made up to $1,400 a week.

As the regulations took hold, his pay dropped and eventually he began fishing alone - which he has mostly done for 14 years. When he takes on crew members, he advises them they will not be insured at sea. Close calls come once a month, especially when there's fog or bad weather. Sanfilippo also knows about tragedy: His brother, James, was killed seven years ago after a 541-foot Cypriot-flagged tanker slammed into James's boat.

Like Giacalone, Sanfilippo said no amount of money could compensate fishermen for the loss of the two fishing grounds to the LNG terminals. "They are very, very productive spots," said Sanfilippo.

Still, Sanfilippo said he's grateful that the funds will allow fishermen to keep working. "When God closes one door he opens up another - that's exactly what it is," said Sanfilippo, who received 10 additional lease days last year from the fund, and paid $250 a day for another 37 days on the open market.

Mark Carroll almost left the fishing business two years ago, but said the subsidized lease days have allowed him to keep working. "It kept us in business. Without the days at sea program I probably would have gone bankrupt. I wouldn't have had enough days to keep my boat running," said Carroll.

Like other fishermen, Giacalone believes the fishing stocks already have rebounded, and points to the large numbers of discards fishermen must throw overboard in order to comply with the law. He hopes that, in time, the federal government could reverse its policies and allow fishermen to work more, and to keep the fish they're throwing back into the sea. Until then, his goal is to keep fishermen working.

"We want Gloucester to stay in the fishing business, period," he said.