Ready to lay it on the line

Thayer's Richman eager for BC role 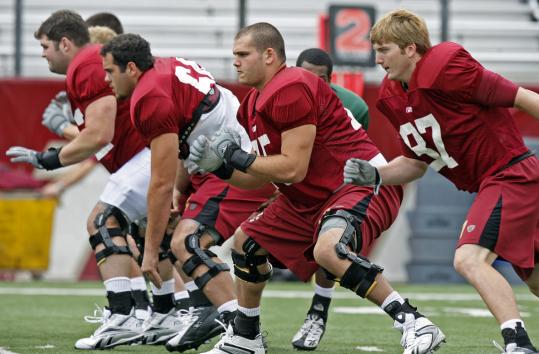 Nathan Richman is used to being the best football player on the field.

The 6-foot-6, 290-pound offensive lineman came out of Thayer Academy in 2006 ranked as the sixth-best prospect in New England by rivals.com. Richman, who started playing football at age 6, was heavily recruited by Division 1 programs across the country.

He chose to play at Boston College. The program is local, has a rich history of producing NFL offensive linemen, and has a strong academic program.

"I only live 40 minutes away from school," said the North Easton native and former Boston Globe All-Scholastic. "We were a top-10 program last year and have been a top-25 program for the last few."

But things haven't gone as planned for the 19-year-old Richman, the 2006 Independent School League co-MVP and NEPSAC Lineman of the Year. He was redshirted last season as a freshman and was relegated to the sidelines. He said he was redshirted because the coaching staff wanted to give him a chance to better understand the program and maintain his four years of eligibility. As the Eagles got off to an 8-0 start last season and climbed to No. 2 in The Associated Press Top 25 - their highest ranking ever - all Richman could do was watch.

"I guess as you go, you start to get used to it," Richman said of being redshirted. "I realized it wasn't going to be the same thing right when I got there. I was going to have to compete to keep up with these athletes."

Compete is what he will do this year. Richman is listed second on the depth chart at left tackle behind Anthony Castonzo, a 6-foot-7, 287-pound sophomore. Castonzo, however, started all 14 games last season as a freshman, the first true freshman to start on the BC offensive line in 10 years.

"I'm just trying to prove to [the coaches] in practice that I can play," said Richman. "Hopefully they believe in my ability."

Richman has gained 20 pounds since he has been at BC and is much stronger, now able to bench-press 370 pounds. He said he worked out five times a week over the summer while the entire team remained on the BC campus.

"Your legs are so important as an offensive lineman," Richman said. "I'm trying to get bigger, faster, and stronger."

Richman certainly chose the right program to perfect his skills. The Eagles have produced some of the NFL's best offensive linemen, including Pete Kendall (Redskins), Dan Koppen (Patriots), Tom Nalen (Broncos), Chris Snee (Giants), Ron Stone (Cowboys), and Damien Woody (Jets), who have a combined 62 years of NFL experience. And coach Jeff Jagodzinski has served as the offensive-line coordinator for the Atlanta Falcons and Green Bay Packers. The Falcons led the NFL in rushing in 2005 under Jagodzinski's watch.

"It makes you feel comfortable," he said. "You know if you work hard and keep your head on straight, eventually you will get better."

Jagodzinski "will come over after drills and give me advice on my technique," Richman said.

"He'll show me how to make my second step faster or get my hands up quicker. And you know what he's telling you is worth a lot."

Chris Crane is taking over the quarterback reins for Matt Ryan, who was selected third overall by the Falcons in the 2008 NFL Draft.

Richman was on the scout team offense last season, playing against the defensive starters in practice. This year's preseason camp is three weeks long with four scrimmages mixed in between. Richman said he is working hard on his pass blocking, which he prefers to run blocking because there is less margin for error.

"If you miss one block, the quarterback can get hit from the blind side," Richman said. "There's more pressure on you."

The real pressure could come in the Eagles' season opener Aug. 30 at Kent State. Richman said he can't stop thinking about the first time he takes the field.

"Hopefully the play turns out good, a touchdown," he quipped. "I just have to make sure I do my job and make sure my guy doesn't hit the quarterback. Just hold onto my guy until that whistle blows."

A whistle he hasn't heard on the field in over a year.