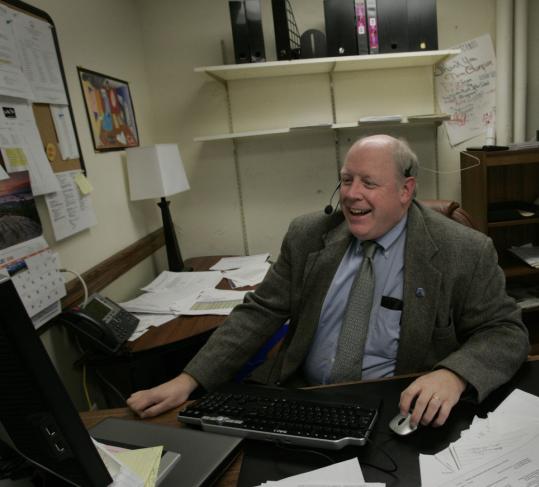 Tom Champion is not coming back.

Members of the Davis Square LiveJournal, an online blog for West Somerville, have offered everything from cookies to sympathy cards to get him to return to their website. His brave experiment has helped restore their faith in local government, they say, and their message board just isn't the same without him.

Nine months ago, he took the step of logging onto the site, identifying himself as a city official and politely answering someone's question. LiveJournal members had long been accustomed to kvetching among themselves about parking tickets, unplowed streets, and the like. But City Hall joining the discussion, providing insightful answers without being pushed? That was unheard of.

Then, Champion did it again. And again. Soon, he was a regular contributor, someone LiveJournal members could count on for straight answers about municipal goings-on.

At the click of Champion's mouse button, old City Hall had caught up with the 21st century.

It was e-governance in action, and it was happening in Somerville, a city that prides itself on being cutting-edge.

"He was someone who had a name, a face, a personality, who could just about talk about anything," said Ron Newman, a Somerville resident and one of LiveJournal's four moderators. Champion's participation, he said, "was good for City Hall, as well as for the LiveJournal members."

Everything was going swimmingly until late June, when a LiveJournal member posted an account of a reported sexual assault near Tufts University.

Champion, who is one of the first officials to hear of major crimes in the city, hadn't heard of the case, so he asked the police for verification. Due to a miscommunication, the police told Champion the assault never happened, which is what Champion told LiveJournal members.

A few hours later, the police told Champion the assault had occurred. But by the time Champion posted his correction, the victim in the case had sounded off in a posting of her own.

Two weeks later, Champion tried answering a LiveJournal member's complaint about getting a parking ticket. But due to another miscommunication, he provided some incorrect information. After that misstep, he'd had enough.

On July 11, Champion closed his LiveJournal account for good. The back-to-back controversies, Champion said, had reinforced a truism he'd been contemplating for weeks: that the Internet is fraught with pitfalls for someone who tries to be both an official spokesman for the city, and just one of the gang.

"When am I speaking for myself, and when for the city?" Champion said in his final LiveJournal message, in which he questioned whether he was simply feeding his own ego by participating. "It's simply inappropriate for me to pretend that I can 'unofficially' take part in any online community - even as decent and thoughtful a community as DSLJ. This was, therefore, a mistake."

LiveJournal members were shocked. (The group, which is free, has 1,562 subscribers, though probably no more than 100 actively post.) Some were so incredulous that they suspected someone had hacked into Champion's account to delete it. But as reality set in, members began openly lamenting his loss.

"Having someone who's able and willing to look into our questions and issues with the city really makes a huge difference," wrote Aaron Solochek after Champion's departure. "It reminds me that there are reasonable people working behind the scenes, and that actually makes me eager to work with the city on issues."

Most LiveJournal members said Champion's postings were earnest, informative, and often witty. He even adopted a photo of a cat talking into a telephone as his online avatar. (Champion's voice is heard on the city's automated snow emergency parking messages, so the cat's line is, "Move the cars, please.")

Champion is hardly the first public official to test the Internet waters. According to an annual Ohio State University survey, about one-fifth of US cities with more than 50,000 residents have some kind of interactive forum on their hometown websites. But having a City Hall official step into an online neighborhood, becoming a peer with city residents, is another matter.

"I don't know of any examples where the city is responding via a nonsanctioned website," said Jennifer Cowley, an Ohio State associate professor of city and regional planning, whose department surveys more than 580 cites a year about their online presence. "That's not saying it doesn't happen. But that's not typical. The city usually wants control."

Marc Holzer, director of the E-Governance Institute at Rutgers University in Newark, N.J., said he's heard of a smattering of similar examples. In almost every case, he said, the city employee stops blogging because "someone in the bureaucracy gets cold feet."

Holzer said Champion's experiment could have worked had he stuck with it. And, in his view, the benefits would have outweighed the hassles. "We've seen a decreasing trust in government. The Web or e-mail or these postings offer an opportunity to really rebuild trust," he said.

Indeed, more than a dozen LiveJournal users said Champion's input has made them care more about their city than ever. Because of Champion, one user wrote, he'd vote for the mayor again.

Sitting in his City Hall office last week, Champion reiterated that he was to blame for posting the incorrect information. He said he wasn't pressured by the mayor or any other elected officials to log off, and that the decision was entirely his. (Curtatone said he appreciates what Champion was trying to do, but agreed that the city doesn't need "a special Internet ombudsman.")

Champion emphasized that the city's 311 phone information line, where live operators are on duty 24 hours a day to answer residents' questions, can provide as much information as he can. And he pointed out that all Somerville's officials should be open to answering residents' inquiries, if people just give them a try.

"I think this is a relatively new frontier for a lot of people who are engaged in government," said Champion. "There are almost certainly people out there who've thought about this and been smarter than I was and said, 'Nah, this is really not the way to go.' "

Will LiveJournal users ever hear from Champion again?

Sure, he said. His office is looking into posting breaking news on LiveJournal - such as snow parking bans - though there's currently no plan for anyone to answer questions as he did.

And if he ever leaves City Hall, Champion, an ex-blogger himself, will log on again.

"There's no question that the day I cease to be a city official and become again just a resident, I will rejoin the Davis Square LiveJournal community," he said.