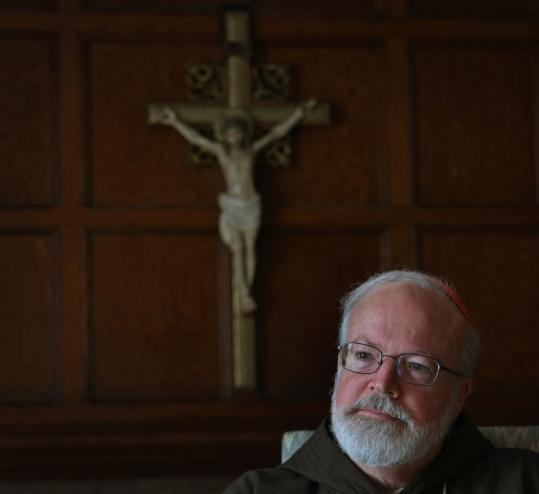 Some bishops would have attended an anniversary celebration. Others would have held a public Mass. Cardinal Sean P. O'Malley skipped town, checked into a monastery, and prayed.

Five years after he was installed as the Roman Catholic archbishop of Boston, O'Malley remains in many ways the most unusual of public figures - the prince who dresses as the pauper, the leading man who hates the spotlight, the shy man prone to bouts of silence who has, in his own inexorable way, tackled one crushing problem after another, delivering the archdiocese from something close to free-fall to something akin to stability.

He arrived in Boston on July 30, 2003, confronting, for the third time in his career as a bishop, a diocese thrown into crisis by clergy sexual abuse. But if the situations confronting the Fall River and Palm Beach dioceses had been grim, the situation in Boston was ruinous. So bad, in fact, that when Pope John Paul II asked him to move to Boston, O'Malley unsuccessfully sent a plea to the pope to reconsider.

"I dropped the phone . . . it was quite a shock," O'Malley said in an interview Tuesday. "I did ask him to reconsider, and it came back immediately with, no, this is what he wants you to do."

O'Malley ticked off the litany of woes that confronted the archdiocese that summer: parishioners angry and bolting over the abuse crisis, the church's coffers in "economic free-fall," money-losing hospitals, failing pension funds, a rapidly emptying seminary, and 1,000 lawsuits against the diocese.

"When I got here I found out that things were worse than I had feared," he said. "Things were just in very, very bad shape."

He still faces enormous challenges and has many critics. Five closed parishes remain occupied by protesters, who are also challenging church closings in church and civil courts. There are dozens of abuse claims pending, and the cardinal faces pressure from victim advocates, which he has resisted, to publish a list of all accused priests. The fund that provides benefits to sick and retired clergy is in serious financial trouble, and some priests continue to find O'Malley a remote figure.

And then there are the really big problems. Mass attendance is at historic lows. The number of priests is dwindling fast, with many expected to retire or die in the next few years. The Catholic Church's influence on public policy is diminished. And, even among its own adherents, many of the church's key teachings, on birth control, women's ordination, homosexuality, divorce, capital punishment, and abortion are disputed, contested, and, at times, ignored. A recent Pew study found that 1 in every 10 Americans is a former Catholic.

"There are still major issues facing us as a Catholic community - not just the state of our schools and our hospitals, but how will we have viable, vibrant parishes with the decreasing numbers of priests, and the sense of alienation among people who were baptized Catholics - those are huge challenges facing us," said the Rev. William P. Leahy, the president of Boston College.

"But when I think about where we were as a community five years ago and where we are now, things are much calmer, and there's a sense of direction at the leadership level of the archdiocese," Leahy said.

O'Malley said he thinks the archdiocese's problems "have been vastly improved on."

"They've been very challenging times, but I think that there has been motion forward," he said.

Over the five years he has been in Boston, O'Malley has taken previously unimaginable steps in his effort to rebuild the storied church of Boston.

He sold the archdiocese's leafy 64-acre campus in Brighton to Boston College, and used the proceeds to settle abuse cases. He closed one-fifth of the parishes, acknowledging that the archdiocese no longer had the worshipers, the priests, or the funds to justify 357 churches, and he closed multiple parochial schools that he said had become too small to survive. He replaced nearly every top manager in the archdiocese, reduced the size of the administrative staff by about one-quarter, spun off eight Catholic high schools, and tried unsuccessfully to sell the Catholic hospitals. He cut administrative spending from $51 million the year before he arrived to $35 million last year, and slashed the annual deficit from $24 million the year he arrived to $2 million last year.

He moved from the traditional archbishops' mansion in Brighton - which he then sold - to a shabby rectory in the South End; he traded down the archbishop's car to a Avalon, and he continues to wear the brown hooded robe and sandals that symbolize the vow of poverty he took as a Capuchin friar.

"If I had my druthers I would prefer to be living in greater simplicity," he said. "I see the bishop's role as being a pastor, more than being a celebrity. And I suppose that's what I'm uncomfortable with."

Despite - or because of - his discomfort with the media, he revamped the archdiocesan newspaper and television station and launched his own weekly e-mail. He became the first blogging cardinal, dictating a weekly diary of his local events and frequent travels, a rare window into the life of a modern-day cardinal-archbishop.

He also required that every organization he controls - more than 40 - make public its finances each year, an effort that has been plagued by annual delays, and proven unsuccessful at the parish level, but that has won him praise from national watchdog groups because it is so far ahead of the level of disclosure by other dioceses.

He suffered multiple defeats and endured innumerable controversies, some of them the inevitable conflicts that confront Catholic leaders in the United States, but others attributable to misjudgments by the archdiocese. His decision in 2005 to lock out a group of kindergartners from a school he was about to close stands out as a low point of his tenure.

He also drew criticism for moving too slowly to remove a hospital head who was accused of harassment. His major effort at affecting public policy - a sustained attempt to block and then limit same-sex marriage - failed at every turn.

He apologized for a sentence in a homily that grouped feminism with a variety of social ills, and he publicly reversed his lifelong practice of washing the feet of only men on Holy Thursday. He refused to attend a Catholic Charities fund-raiser that honored the abortion rights-supporting mayor of Boston, Thomas M. Menino, and he ordered Catholic Charities to stop offering adoption services rather than continue to comply with state rules prohibiting the exclusion of same-sex couples as potential adoptive parents.

"He clearly was surprised by the degree of public scrutiny of the church that went on here," said one of O'Malley's top aides, the Rev. J. Bryan Hehir.

O'Malley proved to be responsive to criticism, at least in some cases.

"He reversed eight to 10 decisions, and got a lot of criticism from some insiders on it, but he did it," said Sister Janet Eisner, the president of Emmanuel College, and the cochairwoman of a lay committee that reevaluated parish closing decisions for O'Malley. "He was not afraid to listen."

Above all, he focused his energy on trying to lead the archdiocese out of the abuse crisis that had led to the resignation of his predecessor, Cardinal Bernard F. Law, who had become a lightning rod for criticism about the church's failure to remove sexually abusive priests from ministry.

O'Malley met with about 200 abuse victims and their families, and spent nearly $6 million on therapy and medication for them. He settled about 750 abuse claims - at a price tag of about $100 million. He oversaw about 250,000 criminal background checks of priests, deacons, educators, and volunteers, and put 293,000 children and 176,000 adults through abuse prevention training.

And, most dramatically, he pulled together an unprecedented meeting in Washington between Pope Benedict XVI and five victims of clergy sexual abuse - a watershed moment in the history of the abuse crisis.

O'Malley has been widely praised for his actions to settle abuse cases swiftly and his success at bringing the pope's attention to the issue, but victim advocates remain critical.

"He has an extraordinary understanding of and appreciation for symbolism, and clearly worked hard in the early days to establish a positive image, but where the rubber really meets the road, he's almost no different than any of his colleagues," said David Clohessy, the national director of the Survivors Network of those Abused by Priests.

At times, O'Malley has seemed unhappy with the role of archbishop of Boston. In 2004, when a parishioner angry at the proposed closing of her parish confronted him in a receiving line, O'Malley became so upset that he had to be escorted out of the church. A few months later, in an open letter about the parish closings, he appeared to wish for death, writing, "At times I ask God to call me home and let someone else finish this job."

And, after public criticism of a remark he made about feminism in a homily, he wrote in the Catholic newspaper The Pilot, "being Archbishop of Boston is like living in a fishbowl made out of magnifying glass."

"Certainly in the last five years there [have] been darker moments," O'Malley said. "But I have not lost my faith or my desire to serve God's people."

People who meet with him regularly say that, although he is still quiet, there are fewer periods of complete silence, which many had found unnerving at first.

"You get 10 sentences out of him now, instead of five," Menino said. "He's a very quiet guy, but his few words that are spoken mean something."

And he springs to life at the pulpit. O'Malley views preaching as a top priority - following his model of St. Francis - and he has proven to be a passionate preacher with a knack for storytelling, a broad familiarity with literature and culture, and an inerrant sense of comic timing.

O'Malley has said he cannot understand how Catholics can vote for Democrats, but he now has a bimonthly phone call with Menino - they had breakfast last week - and he visited Senator Edward M. Kennedy, a lightning rod for criticism by conservative Catholics, in the hospital last month.

Most strikingly, O'Malley welcomed back into the Catholic fold businessman Jack Connors Jr., a prominent and wealthy civic leader who was ostracized by the chancery when he publicly spoke out about his disappointment with Law's administration.

"There's no question that when I was first introduced to him, the three wise men were still there, and they weren't signing up for any galas that I was running," Connors said, referring sarcastically to a troika of holdover officials from the Law administration who remained with O'Malley for several years.

The reconciliation has sent a signal that O'Malley is willing to work with the many Catholic power brokers in Boston who drifted away during the abuse crisis. Connors now compares O'Malley to Jesus, and pledged to raise $80 million for the Catholic schools of Dorchester and Brockton.

Menino has also been converted from critic to fan. The mayor, furious over the Presentation School debacle, publicly humiliated the cardinal by staging an awards ceremony for the school's pupils at Faneuil Hall after the archdiocese canceled the event at the school. Today, Menino, like many observers, believes O'Malley was a victim of bad advice from tone-deaf church officials, and says simply, "he got burnt."

"In the beginning, I was very concerned about what he was doing - he wasn't calling, and the people around him thought they could do anything because they were the church," Menino said. "But he has grown more into the job than people expected. He's more willing to listen, to sit down with different groups in the city, and he's telling people what he's going to do before it happens. We don't always agree, but we have conversation - it's my religion, it's his religion, and we want to make the city work."