Inspired by a longtime passion or worried about financial security, many baby boomers are pursuing new careers 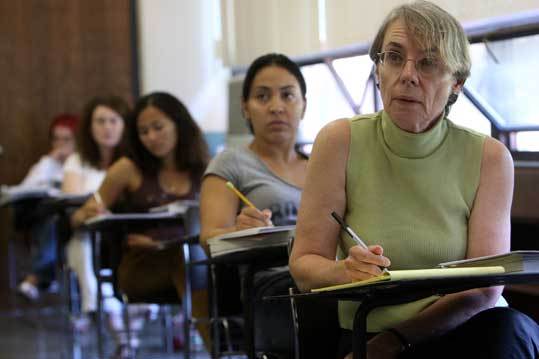 When Jane Gifun's father retired from New England Telephone, he took his first Social Security check and bought a set of golf clubs. For the next eight years, he spent countless hours on the greens. Never mind the birdies - in his golden years, even the bogeys were beautiful.

Gifun's own retirement looks much different.

"My dad loved to putter, but that's not me," said Gifun, of Andover. "I can't see myself spending the rest of my life sitting on my front porch rocking or dead-heading the flowers in the garden."

After retiring from the interior design business, she pursued a lifelong dream of working with children who have disabilities. Last year, soon after celebrating her 60th birthday, Gifun enrolled in classes at Northern Essex Community College, where she is studying for an associate's degree in early-childhood education, and then landed a part-time position at a day-care center.

"I want to do something I love," she said when asked about her retirement plans. "Doing something you're passionate about keeps you younger; you're not always dwelling on what's wrong with you. Instead, you're enjoying life."

A growing number of baby boomers, those born between 1946 and 1964, are embracing a similar outlook. Some are doing so by choice. Others, faced with plummeting stock portfolios and a weak housing market, are readjusting their plans. They may have left their careers, but they are still in the workforce, in some other occupation to pay the bills.

Those who can afford to retire to a life of leisure are more likely today to view the final decades of life as an opportunity to do something they have always wanted to do.

"The baby boomers were the children of the '60s," said Linda Homsey, a certified financial planner practitioner with Freya Financial Services in Winchester and a past president of the Financial Planning Association of Massachusetts. "They were looking for meaning in their lives back then, and that's been carried forward into their retirement.

"There were some who were fortunate enough to find a career that allowed them to live their passion," Homsey said. "Most, though, were simply employed to accomplish their short-term goals: buying a house, raising a family. Now that their kids are grown, they're looking again to fulfill their own needs, to make a difference in the world."

One of Homsey's clients, a widower of about 60, traded a corner office for a new adventure overseas. He does philanthropic work, helping orphans in Africa. Another client, an engineer who followed the financial markets in his free time, retired to pursue his passion. He started a hedge fund.

Those clients managed to squirrel away enough in their savings accounts to fund their dreams. They are among the lucky ones. For many others, rethinking retirement is a necessity, particularly in trying times.

For many, an unprecedented dip in property values nixed plans to sell the family home and downsize, a common strategy for building a retirement nest egg. For others, dwindling investments and diminishing returns in 401(k) accounts forced the decision, the AARP study found. It polled 1,002 people age 45 and older; the findings were released in May.

But many baby boomers are changing their retirement goals if they can afford to leave their jobs. A generation that transformed gender roles, improved race relations, and revamped public education is now updating conventional notions about what it means to step off the corporate ladder and take a step back from career ambitions.

For them, this stage in life has nothing to do with slowing down. Rather, it's a time to embark on journeys of self-discovery.

"The plan was to retire at 50 and take it easy, go on trips and just enjoy life, but now I don't plan to stop working until I'm 70," said Denise Sullivan, 61, of Rowley, who was forced to alter her plans after a difficult divorce. "This isn't something I planned on, but I look at it as an opportunity. I've had a lot of sadness in my life; I feel like I want it to mean something. I want to contribute."

Sullivan, an alcoholic who has been in recovery for 32 years, plans to share her life experience with others. In April, she closed her Newburyport hair salon, a business she had operated for more than two decades, with plans to begin a new career as a substance abuse counselor. She expects to earn her associate's degree in human services from Northern Essex next month.

"We're seeing a dramatic rise in the number of older students who are choosing to enroll in our human services programs," said Jane Gagliardi, coordinator of the Human Services Program at Northern Essex.

About 15 percent of the 150 or so students in her certificate and degree programs are 55 or older, up from just two or three students in that age group a few years ago, she said.

"I never would have forecast or predicted this trend, but seeing it, it comes as no surprise to me," said Gagliardi, who at 55 is proud to count herself among the baby boomers. "Those of us who grew up in the 1960s, we can't help but be influenced by that era, regardless of what choices we made subsequent to those times.

"It's wonderful to see people making choices to contribute to the well-being of the world in some way, when their time could be compensated at a much higher financial rate," Gagliardi said, adding that many of her older students come from more lucrative fields. "They're making a conscious decision about what they see as being meaningful."

Financial advisers who work with retirees view this approach to retirement as practical, given that many baby boomers can expect to live well into their 80s or 90s. Extending work life by even a few years can mean the difference between a comfortable retirement and one fraught with worry.

"A lot of people come to me at 50 and say they want to retire in five years, or in some cases, five minutes," said Rick Fingerman, president of Financial Planning Solutions Inc. in Newton. "I run the numbers and often find I have to tell them, 'If you don't want to run out of money at 78, you'll have to work full time for another five years or part time for 10.' Many people choose to retire from their current jobs and do something they really love."

For Gifun's father, leaving the telephone company for the hazards of the back nine was a dream come true, a pleasure he pursued without guilt until his death, eight years into retirement.

He never looked back, never regretted leaving his corporate cronies behind.

For Gifun, the work itself has become a pleasure. She delights in the laughter of her young charges.

"It's my dream job," she said, giggling like a schoolgirl. "Sometimes, I have to pinch myself. I can't believe I get paid to hold babies."

Brenda J. Buote can be reached at bbuote@comcast.net.