With siblings behind her, Stow Democrat hopes to represent a bellwether district 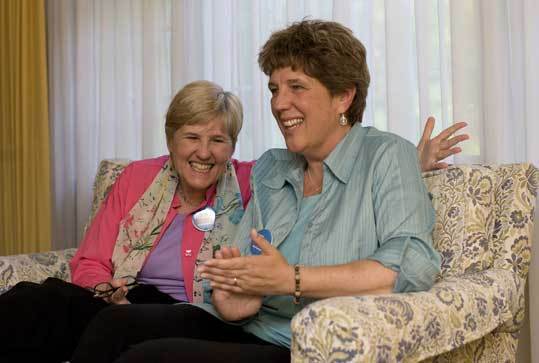 When Kate Hogan considered campaigning for a seat in the state House of Representatives, she gathered her siblings, their spouses, and her partner of 26 years, Susan Vick, around the table.

Should the Stow Democrat go for it? Everyone agreed: Yes, she should, despite the toll it might take on the family's time, energy, and privacy.

Hogan's nephew volunteered to be treasurer, and her brother-in-law took on the duties of the campaign site webmaster.

But it is her younger sister, Meg, who is at the forefront of the campaign, serving as communications director, standing at Hogan's side at events, and handling the news media for this high-profile race.

"My sister has always been someone who can talk to anyone and get anything done," said Meg Hogan, 49, of Amesbury, vice president for external relations for the Home Health Foundation in Lawrence. "When she said she wanted to do this, I just wanted to do anything I could to help her. This is an important race."

Whoever takes the Third Middlesex District race in November will replace Representative Patricia A. Walrath, a powerful 24-year veteran lawmaker, in what is seen as a key regional seat.

The new legislator will be charged with transforming old factory towns into modern green communities, keeping an eye on the progress of much-needed infrastructure improvements along Interstate 495, and replicating redevelopment successes like the $200 million project that over the past decade has turned the 4,400-acre former military base at Fort Devens into the home to 80 businesses.

The winner will also remind Beacon Hill how skyrocketing gas prices and reduced state aid are hurting the far-out suburbs, where working farms can still be found among high-tech companies.

Some political analysts are calling this district - which comprises Hudson, Maynard, Stow, and Bolton - a bellwether for the state, which has seen more than 20 percent of its population and half of its 10 largest publicly traded companies migrate to communities far beyond the Route 128 loop.

Five candidates have lined up for the job, including two other Stow Democrats, Leonard Golder and Ellen Sturgis, and Bolton independent David Goulding.

But the 51-year-old Hogan and the lone Republican in the race, 26-year-old Santino "Sonny" Parente of Hudson, have both won backing from powerful State House veterans.

Walrath, the Stow Democrat who decided against seeking reelection after nearly a quarter-century in the House, has endorsed Hogan as her replacement.

"I know all five candidates, and there are a lot of things that go into making someone a good candidate," said Walrath, 67, who is credited with leading the successful redevelopment of Devens, which extends into Shirley, Ayer, and Harvard. In 2005, Walrath was instrumental in getting $500 million in funding bonds for the state prison in Shirley, and in 2006 she cochaired the committee that crafted the landmark bill that made Massachusetts the first state to mandate universal health insurance.

"Politics is the fine art of compromise, and it takes patience and the proper disposition, and Kate has that," Walrath said.

"Some people come in and throw up their hands after one term, but she will earn the respect of the other legislators and prove herself quickly."

Former GOP governor A. Paul Cellucci - who held the Third Middlesex seat from 1977 to 1984, before serving as state senator, lieutenant governor, and governor - is campaigning on behalf of Parente, an owner of several Hudson businesses and a Cellucci family friend.

His father, Argeo "Junior" Cellucci, hired Parente's father, Santino, a newly arrived Italian immigrant who did not speak English, as a mechanic in his Oldsmobile dealership in Hudson in 1972.

This campaign is "eerily" similar to Cellucci's 1976 race, when he, too, was a young Hudson selectman making his first run for state office, said Cellucci, who left the governor's office in 2001 to accept a post as US ambassador to Canada.

"It was right after Watergate and not supposed to be a good year for Republicans," recalled Cellucci, now working as special counsel for a Boston law firm, McCarter & English LLP.

"Even back then, there was the concern in the region that state government is not paying enough attention to their needs; that hasn't changed," he said. "Sonny Parente is going to run really well. He has experience at the local level of business, he's personable, and he's right in tune with the voters."

Parente, who doesn't face a primary challenger, said he intends to knock on "thousands and thousands" of doors and campaign hard all summer in preparation to do battle with whoever wins the Democratic nomination in September.

"I just hope people compare our qualifications and consider who will fight hardest for them," he said.

Meg Hogan, interviewed during a recent meet-and-greet for her sister at Walrath's home, described the all-for-one family approach to Kate's campaign as an extension of their close bond forged during a difficult childhood. Kate was always the peacemaker in their noisy, close-knit blue-collar family growing up in West Lynn. They all had to grow up fast while their mother, widowed when the girls and their two older siblings were young, raised them on her secretary's wages.

A teenage Meg chose to attend the University of Massachusetts at Amherst "because Katie was there." For most of their adult lives, the sisters have spoken on the phone almost daily, and in person they often finish each other's sentences.

Kate Hogan, a sales and marketing director for a Boston printing company, Gnomon Copy & Color, has worked locally with the Stow and Maynard Democratic town committees and serves on Stow's Council on Aging and Community Preservation Committee.

It's not lost on anyone in the race that family support becomes extra important in a political region that has traditionally conservative pockets, and in a state, however liberal, where Kate Hogan is still one of just a few openly gay candidates seeking state office.

Being gay, she said, "is not a big deal at all. It's just who I am, and everyone knows who I am."

Hogan and Vick, a professor and theater director at Worcester Polytechnic Institute, were married three years ago.

Meg Hogan admits that she can feel a little defensive on behalf of her calm, hard-to-ruffle older sister. While nobody, inside or outside the race, has publicly targeted Kate's sexual orientation, her younger sister fears it will become an issue later on, when the race gets more intense.

"You hear people throw around terms like family values and 'understanding the needs of traditional families,' and it does get me a little, because there is nobody who has been a better aunt or sister or friend," said Meg Hogan.

The candidate says that, if necessary, she will just redirect debate away from her personal life to issues facing everyone in the district.

"Being out there, knocking on doors, you hear the stories of people who are worried about paying for gas, paying for college, keeping their jobs," Kate Hogan said.

"You have a responsibility to them after they've opened up to you. You want to be a model for people, not a stereotype."

Open seats are fairly rare in the state House, and five candidates are vying for the Third Middlesex District.

Incumbent: Patricia A. Walrath, a Stow Democrat; after holding the seat since 1985, she has decided against running for reelection this fall.