Live (or not) from MIT, it's TechTV 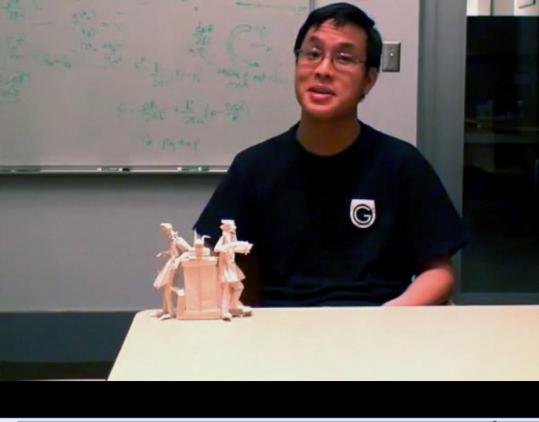 These are just a few of the hobbies of students at the Massachusetts Institute of Technology.

Pursuing mind-blowing pastimes is nothing new for MIT students. Only recently, however, have they been broadcast to the general public.

The venue is the school's new Web-based video-sharing platform called MIT TechTV. On the site, found at techtv.mit.edu, students air original science, engineering, and MIT-related videos, created outside of the classroom - for fun - in their spare time.

"I joke with people that I walk on the campus, I breathe, and my brainwaves start to operate at a different frequency," said Dedric Carter, assistant dean of engineering for development and strategic initiatives, who helped introduce MIT TechTV. "Now we have video to put that into perspective."

Though the site bears more than a passing resemblance to YouTube, the dean of Internet video-sharing, it's set apart by its academic intent and exclusivity. MIT TechTV allows only those with an MIT e-mail address to upload video. However, this initiative of the School of Engineering and Libraries Academic Media Production Services encourages folks around the world to tune in. And they do.

Since the April 2007 launch of MIT TechTV, there have been 2 million hits to approximately 800 original videos by students and faculty, which run the gamut of lectures, experiments, and hobbies. Carter and his colleagues plan to shift the site out of beta (software test) phase in the next few months.

"It's only in the last nine months that it has taken root and that students have really made it theirs," said Carter.

A video dubbed "Arts & Crafts at MIT" takes viewers on a tour of Chan's original designs - the samurai helmet beetle, a hermit crab, a grasshopper, and a centipede. In another video, accompanied by an abridged version of Mozart's Piano Sonata No. 12, Chan transforms a dizzying page of circles and grids into a paper version of the MIT school seal. In real life, it took 10 hours.

"A lot of it was talk about what the MIT seal signifies," said Chan. "There's a little on origami, a little comedy."

Chan was a special guest teacher at Japan's national origami convention two years ago. His designs have been published in origami books, but he credits MIT TechTV for getting his folding to the general public.

"Viewers had good reactions - a lot of them didn't realize you could do that much with origami," said Chan, who also posted a tutorial demonstrating how to make a sword on MIT TechTV. "Technology has gotten to the point where everyone can have a video camera and share their videos on the Web."

The novel site has also captured the attention of local new-media gurus like John Herman.

"I wouldn't say there are many video-sharing sites unique to Boston," said Herman, who is behind a new Web series called Gravityland. "When YouTube rose to the public's attention [in 2005], it was filled with skateboard videos and pranks.

"Over the past few years, opportunity bred creativity. Now there are more and more shows sincerely challenging the accepted standards of video entertainment. Interactivity, user-generated submissions, and remix culture are all coming into their own maturity."

Carter said he hopes MIT TechTV will generate interest in science, technology, engineering, and math among young people, who have in recent years steered away from such career paths. The site is host to videos from an existing program called MIT OpenCourseWare, which provides free online course materials to anyone, including videos of lectures from some of the university's most popular professors.

The site has struck a chord with younger students, Carter said, including a 14-year-old from Poland studying English.

"She wrote us saying she was amazed by the videos being posted," he said. "They inspired her to go into her desired area of study: the intersection of technology and modern art."

Would that include Spice Cream?