Folk art for today: Colorful and right at home 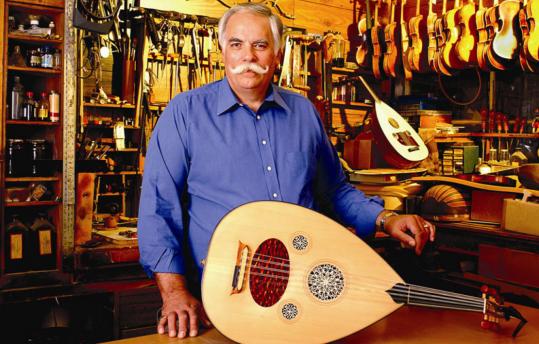 Peter Kyvelos, in his Belmont shop, with an oud, one of which on display in "Keepers of Tradition" at the National Heritage Museum. (Tom Pich photo)
Email|Print|Single Page| Text size – + By Stephanie Schorow Globe Correspondent / July 3, 2008

Say the words "folk art" and chances are your mind conjures up images of 19th-century primitive paintings or perhaps an ornate quilt or wooden carving.

If so, step into the hallway of a new exhibit at the National Heritage Museum in Lexington and meet three jaunty tin men, who could be clones of the famous character in "The Wizard of Oz."

Near these gleaming figures are gaudy, feathery sections of an elaborate fruit-cocktail-inspired costume from a Boston Caribbean festival. Just beyond is a row of musical instruments, including a Middle Eastern oud, a Norwegian fiddle, and an accordion once played by famed Irish musician Joe Derrane of Randolph.

Music fills the room - Irish, Cambodian, Caribbean - from a video display. Overhead, the words of the late grandfather of tap, Jimmy Slyde, are emblazoned on a wall: "Everything has roots. Ain't nothing new babe."

"Keepers of Tradition: Art and Folk Heritage in Massachusetts" has plenty of what you might expect in a New England folk art exhibit - fanciful weathervanes, colorful red ware pottery, delicate scrimshaw, and duck decoys that could fool any fowl. But there's also a hand-laid stone wall, samples of calligraphy, a cross made from knots, and a papier-mache mask with bristling horns and eyes painted with the colors of the Puerto Rican flag.

Not only do the 100 works by 70 Massachusetts artists put to rest that debate of real art versus utilitarian craft, but the exhibition - based on eight years of field research by the Massachusetts Cultural Council - takes a broad view of the nature of folk art, especially as practiced in the Commonwealth.

Exhibition curator Maggie Holtzberg, a folklorist with the Massachusetts Cultural Council, said she sought to highlight the little worlds of closely held traditions passed from one generation to the next. The exhibit "really reflects who lives here - what are the folk arts and heritage of people who live here and what they care about enough to sustain," she said.

Some of the objects on display represent millennium-old traditions, such as the spirit house and elephant-shaped bowl created by Lowell potter Yary Livan. Livan is Cambodian and one of the few survivors of a generation of artists trained in traditional Khmer ceramics; most were killed by the Khmer Rouge. He survived as he knew how to build wood-burning kilns to make clay roof tiles.

Another ancient tradition on display is a marash, a complex form of Armenian embroidery stitched by Anahid Kazazian of Lexington, whose parents fled the Armenian genocide in the early 20th century. Growing up in Syria and Lebanon, Kazazian was fascinated with the marash embroidery. When she was home for two months at age 11 with a broken leg, she learned the technique.

Now 73, Kazazian has taught her daughter and is teaching her granddaughter.

"Every stitch that I make is a cross," she said. "You cannot learn by looking at it. Somebody has to teach you. You can't make a mistake. It's like the framework of a house - when it's wrong, it has to stop and has to be corrected."

By contrast, other pieces in the exhibit reflect the confluence of various cultures as they evolved in the United States.

"So much of American folk art is a blending of traditions elsewhere; think of the English language, how it sounds different in the South and the North," Holtzberg said. "Things are always changing; there are innovations to every tradition."

Many of the artists represented have won national recognition for their work, including instrument maker Peter Kyvelos of Bedford, who won a National Heritage Fellowship in 2001. On display is an intricately decorated oud crafted by Kyvelos, owner-operator of Unique Strings in Belmont.

Kyvelos, 64, remembers a time when Greek, Armenian, and other Middle Eastern music was common in Massachusetts - when he "could flip a coin to see what dance I was going to go to."

Now, fewer people know how to play the oud and even fewer know how to make one. Kyvelos, however, is passing on his knowledge to an apprentice.

"It's always nice for someone to be around to carry on the tradition," he said.

The three tin men reflect another tradition; similar figures once were made to advertise a metalsmith's shop or wares. Centuries later, apprentice metal workers made tin men as part of their journeyman training, Holtzberg said.

The three in the exhibit were made by four retired sheet-metal workers, including Dick Clarke of Stoneham, from Local 17 of the Sheet Metal Workers International Association. The Massachusetts Cultural Council had asked for one tin man; the men made three as they were eager to show off their skills in working copper, galvanized iron, and stainless steel.

Museum visitors can also opt for a free audio tour that features interviews with the artists, something that delights Holtzberg.

"We thought it was really important for people to hear the artists' voices," she said. The exhibit is as "much about the people as it is about the objects."