THIS STORY HAS BEEN FORMATTED FOR EASY PRINTING
Shifting Gears

Popular path is burnished with new bike racks and rest area, and backers have plans for more trails 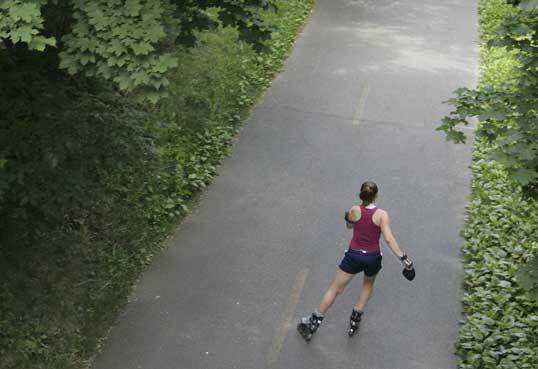 It's the view not seen from the roadway.

Under a canopy of trees, the 11-mile Minuteman Bikeway runs through Cambridge, Arlington, Lexington, and Bedford, skirting backyards, school ball fields, hidden parks and ponds, crossing bridges, and even passing over Route 128.

This season brings a few new features to the Minuteman: bike racks at several spots, a new rest area in Bedford, and a set of signs trumpeting the path in Arlington. And there are some steps toward new spurs linking the Minuteman to other recreational spots, a potential boon to many of the estimated 2 millions users who take to the path each year for transit or recreation.

"There is a sense of community here," said bicycling advocate Jack Johnson.

Johnson helped build that community. He got involved when the bikeway was under construction back in 1992, and has remained a dedicated advocate who wears many cycling hats. Johnson is chairman of the Arlington Bicycle Advisory Committee, webmaster for the Minuteman's website, and cocreator of the bikeway's map. He's also a former board member of MassBike, a certified cycling instructor, the marketing director for Landry's Bicycles and, most important, he lives in Arlington, right off the path, and uses it daily.

Now is high time to celebrate the Minuteman. For one thing, this year marks the 15th anniversary of its completion. Earlier this month, the Minuteman was inducted into the national Rail-Trail Hall of Fame, the first rail-trail in the Northeast to be so honored.

Given the high price of gas, the Minuteman is likely to see even more use. It's not uncommon for cars to take 45 minutes to exit Alewife station during rush hour. Biking, Johnson said, is a perfect solution to both gas guzzling and gridlock.

I rode with Johnson up the Minuteman this month, noting along the way the bikeway's highlights and recent improvements. For a guy like me who spends most of his biking time dodging cars on city streets, I found the smooth pathway and lack of four-wheeled antagonists hurtling my way a welcome relief.

First stop: Alewife, where new bicycle racks and a bike-parking cage will be added this year, as will signs to improve wayfinding and connections to other paths and to note the path's Hall of Fame status.

From Alewife, we biked into East Arlington, stopping at the new Spy Pond Park, where amenities include new racks, a boat launch, a playground, and a dirt shoreline path that parallels the Minuteman. The pond makes a great picnic stop (alas, swimming is prohibited).

In the center of Arlington, Johnson proudly pointed out last month's installation of two huge blue banners to mark Arlington's entranceways to the path. Attached to a frame made from old train rails ("a little bit of railroad history hanging here," Johnson said), the banners also help bikers navigate the path where it crosses Massachusetts Ave. New bike racks have been added, adjacent to a path behind Mass Ave.

It may be months from winter, but last year's plowing of the bikeway after snowstorms remains another welcome development. The pilot program took some effort: While the MBTA owns the right of way, each town maintains its own stretch. Arlington agreed to clear the path from the Lexington town line to Alewife. Bike and pedestrian advocates hope the program will become permanent, and be spread to other towns.

"What was proved in Arlington last year was regardless of temperatures or if it was snowing, people would be out there," said Paolo Marinelli of the Clear the Trail Initiative. He said winter access to the Minuteman made the cold months bearable for many, including elderly shoppers and those needing a safe place to walk for rehab after an injury.

Arlington is likely to repeat the program, he said. Lexington's Board of Selectmen is mulling over the idea.

Back on the path, Johnson and I paused in Lexington Center, a little over halfway from Alewife to Bedford. The bikeway passes under an old railroad train shed, now renovated as the town's Historical Society (and home to a bike rack). Racks have also been installed in Lexington Center near the newly refurbished Emery Park.

At the Bedford endpoint, the Bedford Freight House is currently being transformed into a snack bar and gift shop, with indoor bathrooms. A restored B&M train car will become an air-conditioned rest area, Johnson said. Parking has been expanded, benches added, and there are plans to fix up the old Bedford Depot building.

What makes the Minuteman unique, Johnson reminded me as we lounged on the Lexington town green, is the way it links so many sites and public lands. Walkers and bikers can stop off at playing fields and city parks, from the Arlington Reservoir (swimming permitted) to the woods and wetlands of the 120-acre Alewife Brook Reservation and the 183-acre Great Meadows in East Lexington. The historic Old Schwamb Mill in Arlington is worth a pit stop (also the site of new bike racks).

"It really is a greenway," Johnson said.

Several plans for multi-use paths that could branch off the Minuteman are on the drawing boards. One idea is a connector from Lexington to the existing 6-mile Battle Road Trail that leads into Minuteman National Park. From Alewife could run a Watertown Branch Connector to the Charles River. Also slated is an upgrade to the path east of Alewife, Linear Park, and the connection to Davis Square and the Somerville Community Path. Especially needed is a better crossing at Mass Ave., which MassHighway has designed but construction has yet to begin.

Another proposed trail from Alewife would follow the Alewife Brook into Somerville and Medford, where it would join the Mystic River bike path system. Then, via an extension through Charlestown, it could head to the Boston Harbor, or to points north, via a Bike-to-the-Sea path through Malden and Everett to Revere Beach.

The most ambitious, pie-in-the-sky project begins with improvements to the Belmont Bikeway, presently a humble dirt path from Alewife. This would become the first leg of an envisioned 104-mile Mass Central Rail-Trail from Cambridge all the way to Northampton. "We might see it in our lifetime," said Johnson, picturing a new cycling and B&B tourist attraction for the state.

Hope for this human-powered transportation network is high, but reality has a way of thumbing its nose at visionary minds. Progress slows due to money woes, as well as objections from not-in-my-backyard landowners, who worry about privacy and crime. In other cases, a no-man's land of old right-of-ways means cities, towns, the state, rail companies, the MBTA, and the Department of Conservation and Recreation all must sort it out.

"The problem is it's hard to determine jurisdiction," said Johnson. "If it involves money, no one wants to be responsible."

But the Minuteman still inspires. After years of hard work that began in 1974, the way finally opened in 1993, almost two decades later. Other paths can follow.

For more information on the Minuteman Bikeway, see minutemanbikeway.org; to learn more about the Clear the Trail Initiative, see: clearthetrail.org.

Send comments, bike news and events, and ideas to shiftinggears@globe.com.