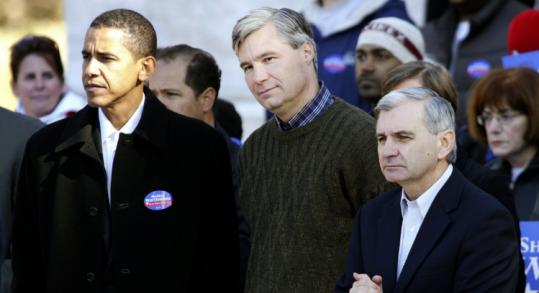 WASHINGTON - In a place brimming with pomposity and pretension, Senator Jack Reed of Rhode Island bucks the mold.

The soft-spoken son of a school janitor is not one of the Senate's show horses. And at 5 foot 7, Reed does not cut an imposing figure on Capitol Hill.

But his strong military credentials and straightforward style have helped vault Reed into contention as a potential running mate for Democrat Barack Obama - or more likely as a possible defense secretary should Obama capture the White House.

The two-term senator brushes aside any suggestion that he would consider leaving the Senate.

"It's very flattering, but I am not interested," Reed said in a telephone interview. "That's it."

He said he's focused on winning reelection to a third term this fall.

"At this juncture, I am trying to return as a United States senator because I think this is a fascinating job, a challenging job," said Reed, 58. "Over the last two terms I've discovered that if you work hard in the Senate and develop expertise, you can have some significant influence in a positive way on a lot of issues. . . . I hope I can serve the Obama presidency in that capacity."

Despite such disavowals, Reed's name has been floated in the media as a possible Obama running mate.

"Jack Reed has quietly emerged as a leader," said Democratic strategist Jenny Backus. "He's tough, but he gets along with a lot of people. He's a team player and he's a straight-talker. Nice is an underrated characteristic."

With little fanfare, Reed recently played a key role with Christopher Dodd, Democrat of Connecticut and chairman of the Senate Banking Committee, and a handful of other senators who drafted a massive foreclosure rescue bill to help hard-pressed homeowners. But it is on the Iraq war where Reed has made his strongest mark.

The West Point graduate and former Army Ranger has emerged as one of his party's leading antiwar voices after having voted against authorizing the war.

Unlike many of his colleagues, Reed shuns the shrill partisan blasts and hyperbolic rhetoric that often dominate the war debate. He offers his views in a matter-of-fact way.

"He's one of the guys people turn to in a debate on the floor for a read-out of what it all really means when you scrape away the spin and the rhetoric," Senator John F. Kerry of Massachusetts, the 2004 Democratic presidential nominee, said in a statement. "There's no artifice with Jack. . . . There's a quiet tenacity there under the surface."

Reed's low-key analytical style, coupled with his military résumé, give him more credibility on the war than most senators, said Tad Devine, a Democratic strategist and Rhode Island native who has worked on previous Reed campaigns. The war looms as a major issue in the White House race.

Reed served in the 82d Airborne Division and taught at the US Military Academy at West Point. He has plugged in with contacts across all levels within the military, from the brass on down.

Reed on the ticket could bolster Obama's military affairs credentials in much the same way that the relatively inexperienced President Bush chose Dick Cheney as his vice president because of Cheney's Washington insider background, Devine said.

"When Bush picked Cheney, it wasn't for his charisma," said Devine. "He needed someone to bolster areas in his background where there was an obvious lack of experience. I think in that respect, Reed would be tremendous as a running mate."

But there's a major hitch.

If Reed resigned from the Senate to join the Obama ticket, Governor Don Carcieri, a Republican, would almost certainly appoint a Republican to fill Reed's seat, a move that could tip control of the narrowly divided Senate from Democrats to the GOP. The Democratic-controlled Rhode Island General Assembly this year considered legislation to require a popular vote to fill an open Senate seat, but the session closed last week without acting on it.

Devine said that because Democrats don't want to risk losing control of their 51-to-49 Senate majority, Reed probably won't be the vice presidential pick.

"The biggest complication in considering Jack for vice president is the fact that there's a Republican governor of Rhode Island," said Devine. "It's a reality in terms of the practical politics of the Senate, which is controlled by the Democrats with one vote now. That's a real-world, practical consideration and something that has to be factored in."