Asks to go over websites visited by the defendant 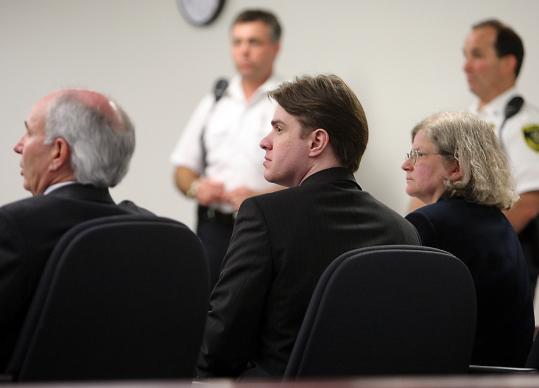 WOBURN - A Middlesex Superior Court jury yesterday spent its first full day deliberating whether Neil Entwistle shot his wife and baby to death, pausing to request one exhibit detailing the suspect's computer activity on the day of the killings.

At about 3:30 p.m., jurors sent a note to Judge Diane Kottmyer requesting 14 pages of an exhibit from the 12-day trial that would show the websites Entwistle visited using his laptop on Jan. 20, 2006, the day Rachel Entwistle, 27, and their 9-month-old baby daughter, Lillian Rose, were shot to death.

Defense lawyer Elliot Weinstein said that the document shows Entwistle had used his computer that day to check sites and e-mails that were related only to his job search.

The "login activity showed that computer user, Neil, accessed his job user information and e-mails related to jobs . . . and that's all," Weinstein said.

Entwistle, 29, faces life in prison without the possibility of parole if the jury finds him guilty of first-degree murder.

Police found Rachel Entwistle and her daughter in the couple's queen-sized bed, underneath a white comforter, on Jan. 22, a day after Entwistle had flown to England.

During the trial, Weinstein said Entwistle had found his wife and baby dead in a murder-suicide upon returning from errands on Jan. 20.

Entwistle never called 911 or his in-laws for help because he did not want to mar his wife's honor, Weinstein said.

Prosecutors have said that Entwistle executed his family after he became mired in financial problems and was sexually unsatisfied in his marriage.

Prosecutors presented a computer specialist who testified that Entwistle routinely trolled the Internet for escort services and enrolled on a swinger's website looking for a discreet relationship.

Before sending the jurors home for the day, Kottmyer instructed them to refrain from discussing or reading media reports of the high-profile case and asked them to not read any crime-related articles or watch similar stories on the television news.

The jury will begin its second day of deliberations today.